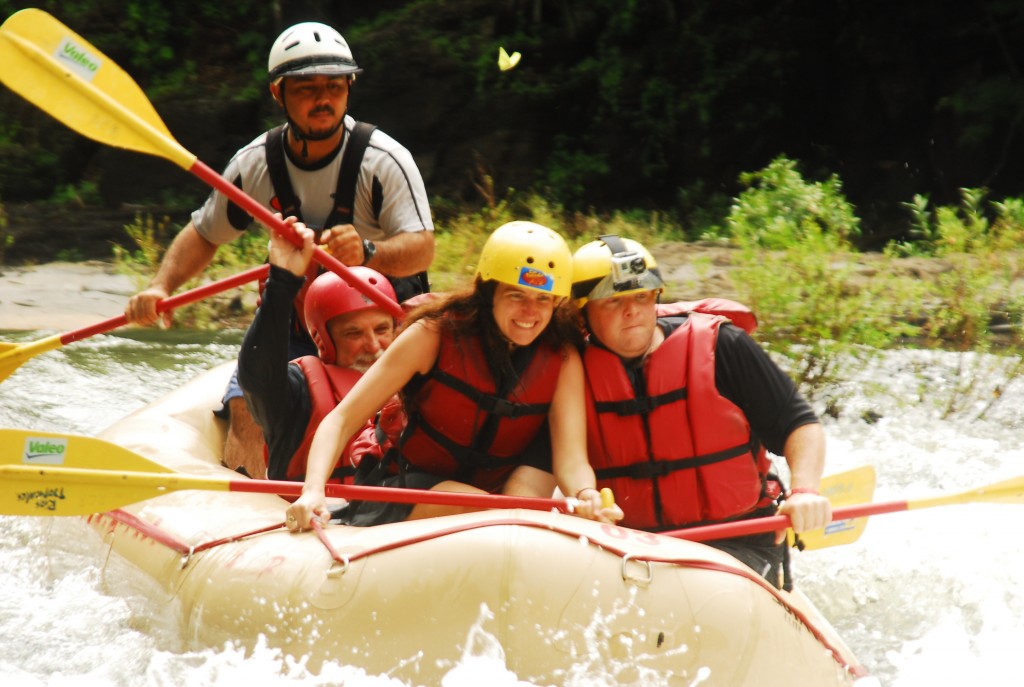 The intriguing difficulty level and open schedule made rafting with Costa Rica Rain Forest Tours in Guanacaste, Costa Rica too exciting to pass up.

Our meeting point at the Rincon Corobici Restaurnat in Canas, Guanacaste was the perfect

backdrop for a day of rafting and sightseeing. The howler monkey noises from above the restaurant set the scene and the bumpy, long truck ride to the waters intensified the experience. It was official – we were in the middle of nowhere!

Our first “putt-in” began with a few practice strokes then we were off on our 2.5 hour white-water trip.  Just when I was starting to feel disappointed with the difficulty level, there was a tight passage with little room for error. By the end of that stretch, I was the only one who hadn’t fallen out of the raft. Although that may sound like a good thing, it most certainly was not! I became prime target number one.

Every turn and drop after that mysteriously hit the hardest on my side as our guide smirked and anxiously awaited my big fall. The one hour mark was our first rest stop and my thirst for extreme adventure had yet to be quenched. I egged on our guide with a challenge of getting me in and not upsetting our older guests.

We relaxed and enjoyed our snack of fruit, cookies and beverages on the river bank, but long and aggressive rapids were not far ahead and he guaranteed to give me the thrill I was seeking.

As we neared the end of the line, I wondered if he was going to live up to his promise, but I

wasn’t aware of the 12 foot, class V drop that was going to conclude our journey. Due to the river’s topography, that part of the rapids can be skipped but my continued stupidity led our guide’s decision to take it head on.

“All in” is a rafting call that requires all participants to paddle in unison as hard and as fast as they can, but “all in” was taken literally when we reached the 12 foot drop. The back of the raft landed in the drop before the front of the raft, making me the first one out.

I knew I was under the drop and the raft was upside down. I knew I had to swim hard, away from the raft, and in one direction no matter what. What I didn’t realize was that Darren had fallen on top of me and I was pinned to the bottom of the river. Panic set in just before he was able to move and free me from the bottom; I frantically struggled to get out of the water and regain composure. Surfacing was a relief as I was able to get a breath but I still needed to swim hard and strong away from the falling water rushing down on top of me.

An instructor was guiding me by yelling and encouraging me to go in his direction. I finally reached him and he pulled me into a cave until the next raft completed the drop. The other riders in my raft, including my husband, were rather far up the river, comparatively. I joined the next raft until we could meet in an eddy and rejoin my group.

My worried husband anxiously looked at me with fear and his eyes and I said, “I still have my paddle”, which was a good sign that I was ok.

At the end of the tour, we took a 55 minute drive back to the Rincon Corobici Restaurant where we had a delicious lunch waiting for us. I thanked the guide for giving me my just desserts and I had a better view of the rafting in Guanacaste.