Holy Moments from an Unholy Disaster 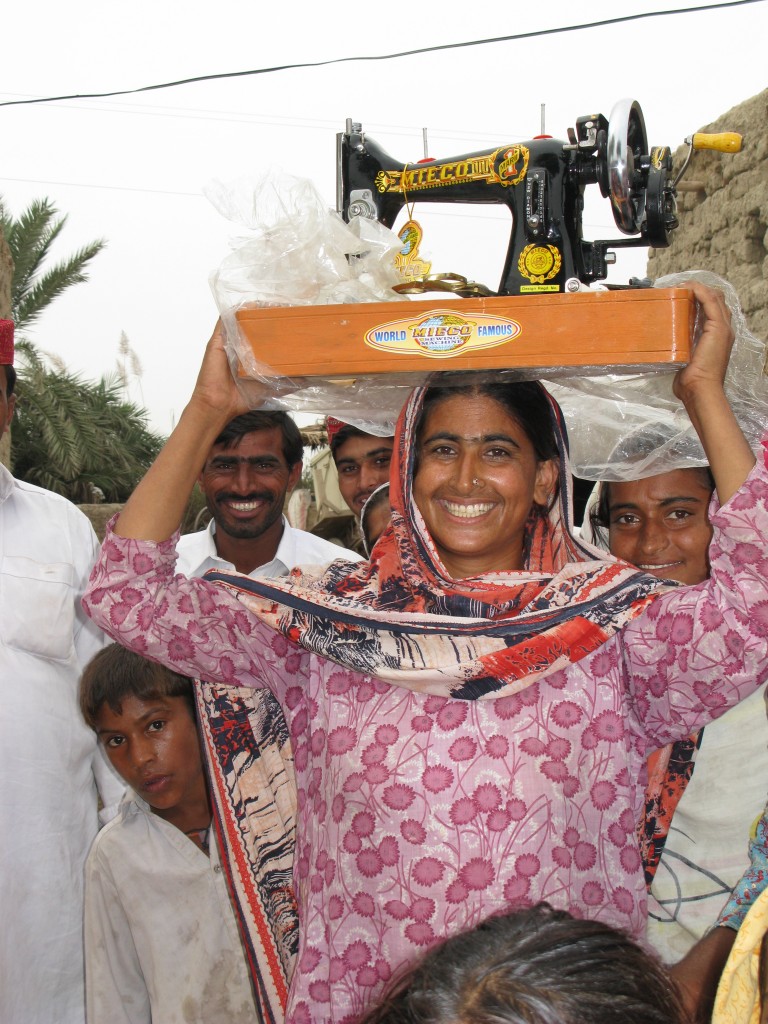 I am the first to admit that given the choice of a 5 star hotel or camping I will pick a 5 star hotel.  I tell friends that anyone who grew up in the developing world with a commode for a toilet and one bath a week would appreciate my love of luxury so it was with some surprise that I found myself so eager to work in flood relief in Pakistan.

When I first heard news of the floods that began to spread their strength and turmoil in various parts of Pakistan in August of 2010, I felt sadness that was somewhat distant and removed.  Raised as an American in Pakistanwith the call to prayer as my alarm clock it was my childhood love and home, but as an adult I have been more connected to the Middle East through work and travel.  My memories of Pakistan are primarily relegated to occasional emails from friends and to those moments on the subway when I close my eyes and the rhythmic movement transports me back to the Pakistani trains of my childhood.   That changed when I saw a picture in the New York Times of the city of Jacobabad under flood waters.

Jacobabad in the Sindh district of Pakistan was home to my family when I was a little girl, it was there that I broke my leg and where my mothers artificial flowers were stolen.  Stuck into the ground around our house to add color to clay that would never grow anything, they provided a source of joy for a few hours and then they were gone!  The NYT photograph hit my heart in a way I had not anticipated and through what could only be a work of God an opportunity came about for me to participate as a nurse in Medical Relief with internally displaced persons in that very area.  I never imagined that I could be a tiny part of this or that my life for a short time would resemble a National Geographic feature story.

Although I grew up in Pakistan and then lived as an adult raising my family in Islamabad, Pakistan followed by seven years in Cairo, Egypt, my current reality is that I work in downtown Boston and drink a Starbucks coffee daily.  I shop at Ann Taylor and get frustrated when my hot water runs out or I don’t have time to put on my eyeliner – this my friends is the somewhat unfortunate truth.  Early September, suddenly the idea of working with victims of the flood began to become real and I began to be cautiously excited, knowing I may not have what it would take but being willing to take that chance.

On October 15th, armed with thirteen thousand dollars worth of donated medical supplies and numerous bottles of vitamins, I boarded Etihad Airlines and flew via Abu Dhabi to Karachi ending the journey in Shikarpur, Sindh.  Just outside the Shikarpur gates, a kilometer from the hospital where we were staying, we saw the remains of the ‘Pictures of the Day’ from the October 4th online edition of the New York Times – 27 burnt convoy trucks. They had been destroyed by members of the Taliban in the area and those same Taliban had been found hiding out in a mosque just a half kilometer from our base.  I remembered saying to a colleague just the week before, “Don’t worry! I’ll be no where near the burnt convoys!” I hadn’t paid as close attention to the location as I should have.

The two weeks that followed were filled with what I will call holy moments – watching a mom point to Heaven in thanks as food was distributed to her family, laughing with children at my own mistakes in Urdu and Sindhi, praying in the depths of my soul for the baby who looked like a skeleton at 4 months of age and the emaciated mom who held that child with the love only a mother could have, putting shoes on an ancient woman with a million stories written into the wrinkles on her face to guard the ulcerated sore on her foot against infection, delivering a sewing machine to a widow who danced with it on her head and seeing so clearly that people are created in the image of God.   These women and children in their unwashed yet beautiful bright colored clothing were dear to the heart of God and “no mere mortals”.

The team of a doctor, two nurses, a community health worker, interpreter, and food distribution team were like a mini United Nations from 6 people groups with ability to speak 6 different languages between us but a unity in purpose and spirit that gave us efficiency as well as times of laughter and joy. We covered 8 villages and two IDP camps in 14 days with surveys of needs, medical camps and food distribution. Mud huts, tents provided by USAID, rope beds, chickens, roosters, water buffalo and cow dung completed the setting and tested our nostrils and stamina but everyday provided a new adventure and new moments of awe. We gave out malaria medicine like it was candy at Halloween and scabies lotion and soap even more so. We experienced desperate eyes change to eyes of hope as a mother realized that her child would be cared for, as a father realized his daughter’s wound would heal. The holy moments were greater than those experienced in any church I have attended and brought me to my knees in tears, laughter and gratefulness.

There was for me an added bonus.  Almost anyone who was raised in a country other than their passport country (better known as a third culture kid) can relate with the immigrant experience.  The sense of isolation, nontransferable skills and being ‘other’ can creep up at the oddest of times and result in a deep loneliness and sometimes conflict with one’s passport country.  The two words ‘between worlds’ best describe our lives and feeling most at home in Heathrow Airport waiting for a connecting flight is very common.

During the time I was in Pakistan, I was not other – I was home.  Seeing friends who knew me when I was young, receiving blessings from men who worked with my father and women who had deep friendships with my mother, walking through compounds to the embraces of old friends, and being woken yet again by the call to prayer were more holy moments that I had not anticipated as I prepared to go.  I was told a couple of years ago by a wise friend that there are times in our lives when we need to remember who we are.  I was given that gift through the action of working in flood relief and going toPakistan.

I arrived back in JFK International Airport in New York City after 23 hours of travel and within a few minutes felt ‘other’ again – there was a moment of confusion as I looked at the Immigration line options.  Was I really a resident alien?  An alien? No – I was aUS citizen shaped by cultures and moments that were not of my own doing.  In that moment I recognized that the peace of belonging happens deep in my soul and that peace can transcend the outside circumstances.

that is a mystery to me but I know it is nothing I did and really simply Grace.

Check out more posts from Marilyn at http://communicatingacrossboundariesblog.com/