Climbing with Razor Blades and Irises 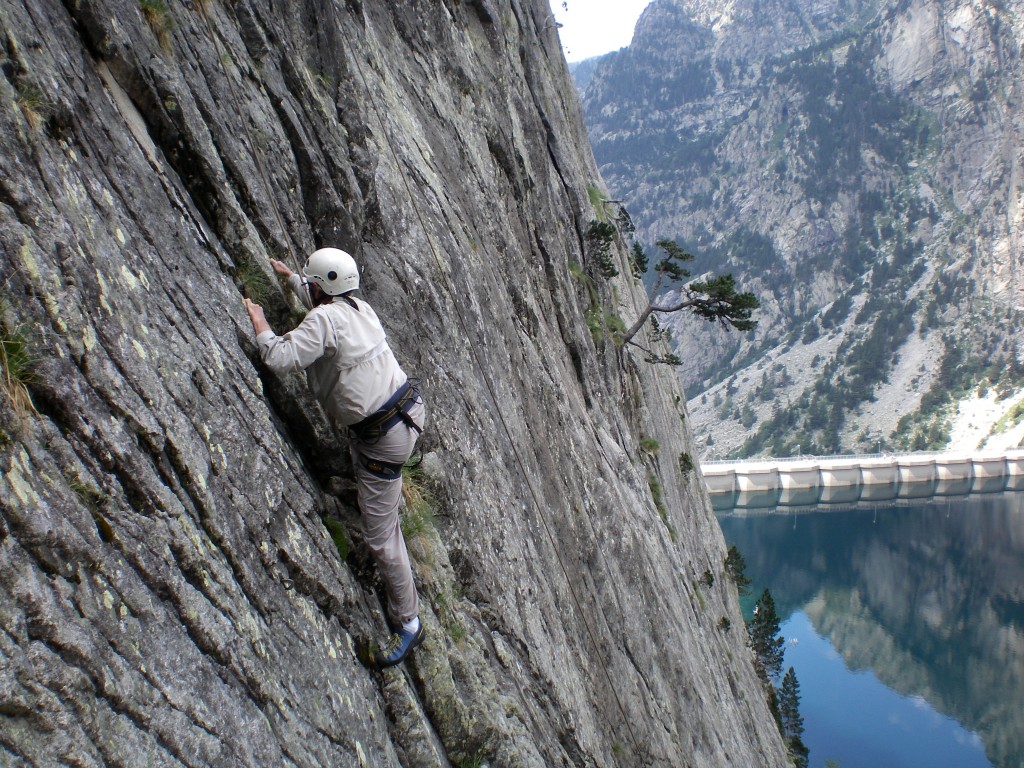 ~Featured Writer: Anne~
The World Is My Cuttlefish

Even in the gym, it’s a solo pursuit. One talks to other climbers on the floor but it’s a focussed endeavour once you’re on the wall – all very serious. If one wanted a sport that encouraged cup-of-tea-chat one would look to tiddlywinks, dominos or knitting relays. (Sometimes, contemplating a rocky overhang or a pendulum-swinging traverse, they are a very appealing alternative).

This is not me. Note the ruins in the background.

But once a year, climbing becomes a team sport for me. We meet with the BB’s colleagues and climb together. Some of the group (which changes each time)  have never set foot on a vertical rock, some have years of technique and muscle that make even the hardest climbs poetic feats of grace and native cunning.

On our first day in Caldes de Bois, the Pyrenees, Spain, not far from the French border, we crossed the dam at the end of the road and followed the path around to the left. Decamping at the base of a number of walls of various climbing grades, we faced the onslaught of the wind, unpleasantly chilly despite the sun. I was delighted to see rich, velvety purple irises scattered around the area (and less than delighted when they came out blueish on my camera).

With two guides – Guido, our supreme guru (website in Italian) , and Juan, a lovely local chap – the newbies were harnessed, shod and on the rock in no time. A number of top ropes side by side ensured heaps of traffic, a hullaballoo of shouted encouragement across the rock and from below, and plenty of wide-eyed fear and fun.

How nice it is as you grip the rock, rigid with fear on your first climb, wondering ‘Am I there yet? Please let me be there,’ to have someone alongside you as evidence that it is possible to scale sheer rock with a grin. And it’s perfectly acceptable, even condoned, to pass a few pleasantries. A quick “How’s your mother?” and “What the hell do I do next? OMG what a view!” is standard exchange.

In situations such as this where people are having a go, watching others learn or watching others in order to learn, camaraderie develops. The businesses that send their employees off on outdoor adventures rely on the bonds that develop through vulnerability. A person who has pushed themselves through fear or fun, brims with life. And even when the intensity of that daringness fades, one is an incrementally different person.

This climb is at another dam wall.
Note the zig-zag stairs on the left of the rock face.

Rock climbing always brings home to me the wisdom of doing one small thing after another to achieve a goal. On a difficult climb, it’s often the only way I can keep going (amid helpful shouts from the BB to “Just go up.”) Find the next tiny hold and move onto that. Another hold, which I couldn’t reach before, presents itself and I continue my creeping ascent.

Later, on a climb in Jurassic Park, an area just off the road south of El Pont de Suert, Alyssa, a never-say-never 20-something, snared me for a climb way past the difficulty I would normally contemplate, with the old “You can just do one move and come down”. To my surprise I found it rather fun (especially when Guido, seeing me flagging at the crux, lent a helping hand on the belay) and made it to the top, albeit with mangled fingertips and plenty of rests.

Whilst climbing that and a slightly easier grade just beforehand, I understood that look on other climbers’ faces as they cast around for a hold, not with desperation, but with interest. It’s the famous ‘flow’ where the task brings you to yourself; where you are your body-mind and its interactions with the world.

On a roll of enjoyment and accomplishment, I opted for another climb. My fingers were red and stinging already and the rock was comprised of tiny sharp edges which necessitated crimped holds using fingertips. At one point, as I tried to find something decent (read ‘smooth and large’) to grab, Rich, Alyssa’s father, called up some advice. “There’s plenty of holds there. Just feel around for a razor blade and that’s it.”

It’s comments like that that keep me going back for more.

Read more from Anne at http://worldismycuttlefish.wordpress.com