Healing through Digging up the Past 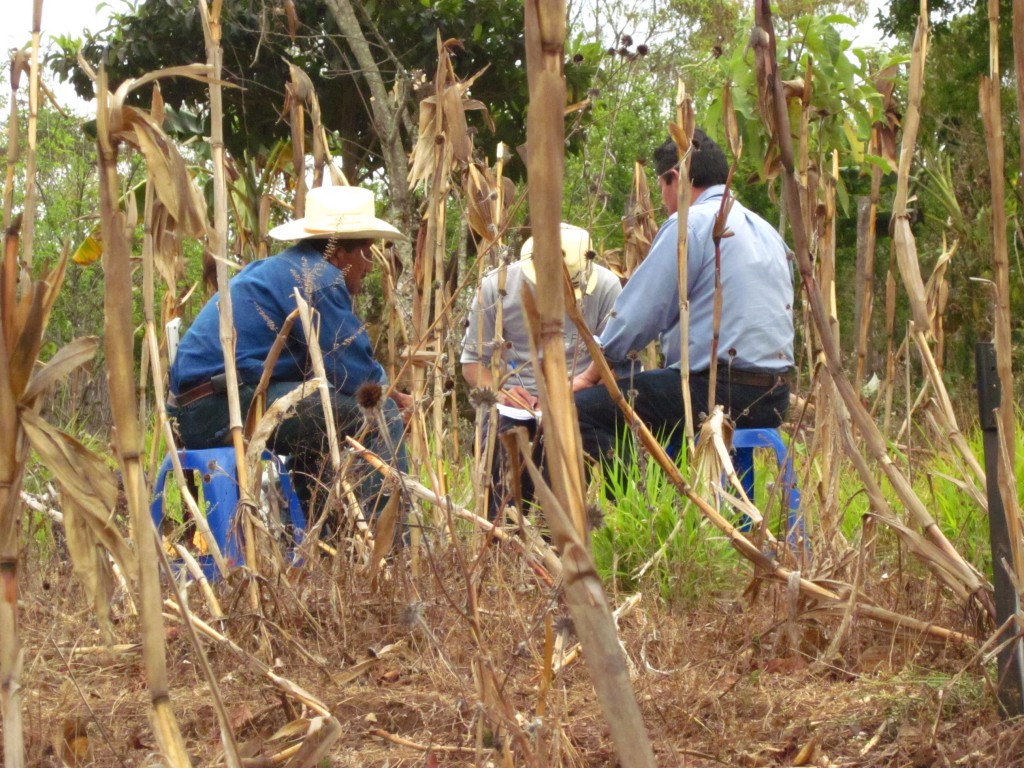 It’s a Friday and I’m in a pick-up truck with my co-worker and one of the many human rights defenders we accompany. I’m relieved there is room inside because we’re on one of the main roads leading out of Guatemala City and the fumes are bad enough for anyone to not want to have to sit in the back. Plus, by the time we leave the city behind the road turns into one giant pothole. The road between Chimaltenango and San Martin Jilotepeque is officially coming in second place as the worst one I’ve been on this country. (First place would be the one between Los Encuentros and Santa Cruz del Quiché.) Our final destination is a cornfield behind a house, where a little over 29 years ago three young teenagers buried their father. A few days before the entire family fled into the hills surrounding their house. The army was rolling in. When the dad walked back to the house the next day, thinking that the soldiers had left, it turned out he got back too early. He was tortured and killed.

Between 1962 and 1996 Guatemala faced an internal armed conflict in which, according to conclusions of the United Nations Mission in Guatemala, 200.000 people were killed or disappeared. In an attempt to “take the water from the fish”, to take out the guerrilla by destroying their perceived social base, a disproportionate amount of these 200.000 victims were non-combatant civilians of indigenous decent. The repressive response of the State and the methods used, led the Commission for Historical Clarification to the conclusion that the Guatemalan military committed acts of genocide.

It took the brothers a day to feel secure enough to make their way back and quickly bury their dad in the cornfield. The teenagers are adults now with kids of their own. They decided to officially exhume the remains of their father and give him a proper burial. They have permission from the person who currently owns the land to start digging. The public attorney is there for the official paper work, the archeologists from the Foundation for Forensic Anthropology in Guatemala are there to properly excavate the remains and there are two women and a man working for the Coordination of Widows of Guatemala (CONAVIGUA), a Guatemalan human rights organization part of who’s job it is to help families in this process of exhumation and reburial of their relatives. My job is to accompany the people from this Guatemalan organization and observe.

During the internal armed conflict, the Guatemala military organized civil patrols which were involved in the disappearance, killings

and massacres of people in their own communities. Nowadays, many of the survivors still live in the same village as the people that victimized their relatives. This makes the search for a process of remembrance, recuperation and healing often very difficult and CONAVIGUA receives threats from people who fear that with digging up the past justice might be coming after them 30 years later. The idea is that with the presence of international accompaniment these threats won’t actually turn into intimidations or attacks.

I see how one anthropologist interviews the three brothers and takes DNA-samples from the inside of their cheeks. The other anthropologists marks the piece of land where the digging will start. The piece of land where the oldest brother thinks to remember he buried their father. After a photograph for the archives is taken, the teenage grandson starts digging. He never knew his grandfather, but he still knows what to look for. After 29 years what once was a person would have been reduced to bones. Everyone knows what a skeleton looks like. If this was a movie in which someone’s life is put into a sequence of important shots. This would be shot 1: the kid starts digging. Shot 2: The kid is wiping sweat from his forehead. He is up to his knees in dirt. Around him are corn plants, all of them harvested and most of them broken off and thrown to the side. Shot 3: The kid would hit the first bone, and slowly the image would fade from dark ground to a complete, uncovered skeleton. And I so wanted the kid to find him. Wouldn’t it have been great if he could have given this person back to his family, this person that he never knew but that yet is part of him?

This is the way it actually goes: The kid starts digging at 1pm on Friday. After fifteen minutes he realizes this is going to be a hell of a job. It isn’t just plowing a couple of centimeters of field to plant some corn. It is digging more then a meter in a field that all of the sudden seems enormous. The brothers are starting to help him out. At 3pm they stop and we all have lunch. The discussion starts. Maybe they buried him a bit more to the left or to the right? He can’t be lying deeper than where they reached now. After lunch one of the sons disappears. He comes back a while later with an old lady who was there the day they put him under ground. She tries to remember and agrees with the spot where the kid started digging. But he doesn’t show up. At 6pm they call it a day. We go back to Chimaltenango to have dinner and some rest. By the time we make it back to the field Saturday morning, the family had already started digging again. There are two more persons. Friends from the kid and reinforcement for what might turn into another long day. However, around 10am a bone is hit.

It isn’t the kid that found his grandfather, it is one of the brothers. Works for me too.

This is when the forensic anthropologists come back in again. In the course of six hours they slowly excavate and exhume the bones of the father. Because the skeleton has been there for a very long time, the bones are porous and it is impossible to hold everything together. So it all disappears in paper bags. Right hand, left foot, cranium, etc. etc. The bags go into a big plastic bag, that goes into a box. The box goes into the back of the pick-up and the anthropologists take it to their lab. Over the course of six months to a year, they will examine the bones and take DNA from the left thigh. That DNA will be matched with the DNA-samples from the brothers. In the end, the bones will be put into a tiny coffin and given back to the family. At that moment, after 30 years, they can give their father a proper funeral.

It’s a Monday morning and I find myself in the laboratory of the Foundation for Forensic Anthropology in Guatemala for a “fieldtrip”. We see two of the five rooms where they store boxes with exhumed remains. Lots and lots of boxes. From many different years and many different places. One of the anthropologists is telling us what he is doing with the bones that are lying on his table. I look at the box under it. It has the same municipality written on it as the one I went to. The bones lying on the table belonged to an 8-year-old boy though.

At the moment of publication of this article, ex-president Efraín Rios Montt and several former high-ranking officers of the Guatemalan army who ordered the chain of command during the most gruesome years of the internal armed conflict are facing charges of genocide in the Guatemalan courts. Making it the first time in history that a former president is going on trial for genocide in his own country.

From August, 2010 until July, 2011, I worked as a volunteer for Peace Brigades International (PBI) in Guatemala. Through methods such as protective accompaniment, independent observation and analysis of conflict situations, based on the principles of non-interference and non-partisanship PBI tries to deter violence against human rights defenders in order to open up space for peace. PBI works on request of local non-violent people, organisations and communities working for human rights and social change not only in Guatemala, but also in Mexico, Colombia and Nepal. For more information about PBI, the different project countries and the PBI support groups in other countries with volunteers from all over the world, please visit http://www.peacebrigades.org/.