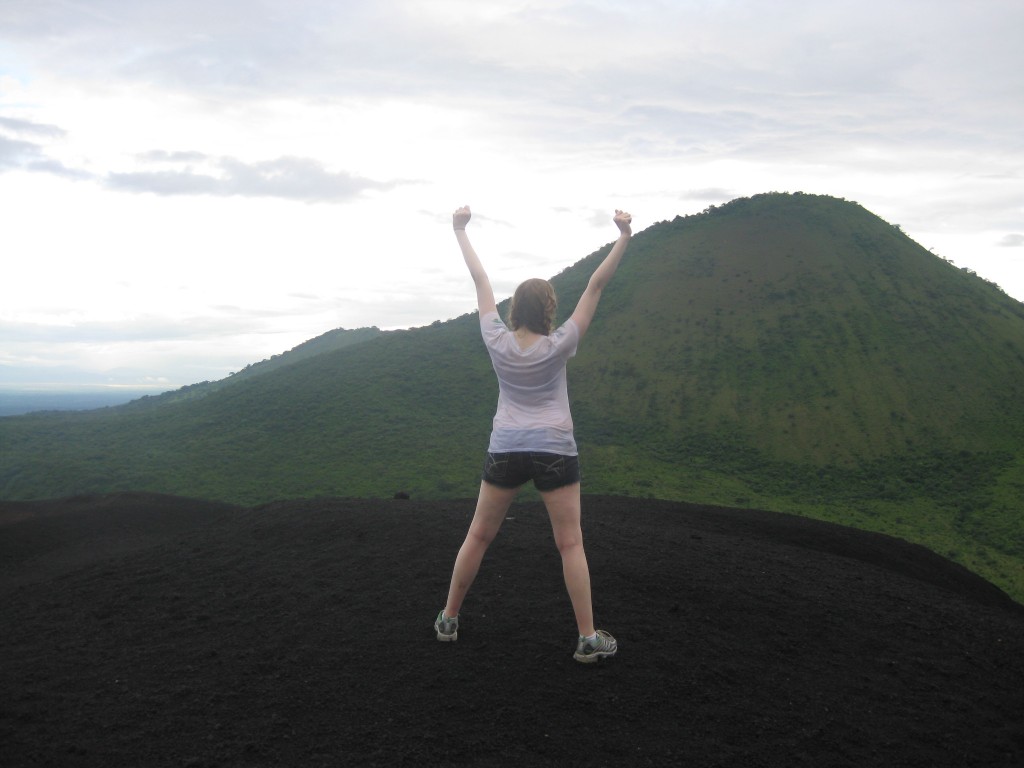 We stopped about halfway up the volcano to catch our breath. The rain had just start letting up and Babs wasn’t sure how long our window was before it would start pouring down again (or before one of us would be struck by lightning). She gave us the Reader’s Digest informational speech on Cerro Negro to speed up our downtime. I took advantage of the camera-safe moment to document our frightening experience, since I was too distracted and excited to really pay attention.

Our adventure brought about mixed emotions of exhilaration, wonder, and a dash of misery (it was freezing).

We were hiking up a freaking volcano in probably the worst conditions known to man (with the exception of seeing lava) and we were still (so far) alive! It was definitely something to celebrate.

Babs ushered us ‘lovelies’ down to the crater; apparently we were in a race against time and nature to get to the top. Helina commented that this was unusual and more intense than what she’d experienced before (they normally have you walk along the top of the volcano at a more leisurely pace, not that this hike was a walk in the park to begin with). The meteorologist in me guessed that they did this to avoid any outright attacks by lightning bolts, but I could have been wrong. It was so surreal to walk past smoking rocks and the black ash. The smell of sulfur filled my nostrils and it made me queasy.

Babs hopped up and down, leading the group up the other side of the volcano. Her cartoon-like reflexes and constant prattle was exhausting. Didn’t she know I was concentrating all of my energy on not slipping, dropping my board, or getting hit by lightning? It started to sprinkle again. After what seemed like a never-ending uphill hike, we made it to the top. (I later found out that we did the traditional 50 minute hike in half the time. This made me feel better about my wheezing and I was somewhat impressed by our abilities). As I dropped my stuff and headed to the view of the crater, I wondered if the Amazing Race would ever create a volcano challenge. Suddenly all thoughts escaped me. I caught my breath and took in the view.

It’s not often that you get to stand on top of the natural wonder that was responsible for creating the world around you. I kept trying to wrap my head around this evolutionary wonder as I regained my energy. Then it was time to get into our very attractive orange jumpsuits. The thin layer of canvas was supposed to help protect our bodies from soot and rocks. They were soggy from the rain and I felt like an escaped convict. All we could do was laugh at each other.

It was very sexy. We went to check out the side where we would be boarding down. Suddenly the fear set in. I couldn’t see beyond the drop off. For all I knew this was where the earth ended; I would be boarding into the abyss, never to be found again.

And to add to my panic attack, Babs told us the haunting tale of cyclist, Eric Barone, who tried to set a speed record down the side of Cerro Negro and nearly killed himself. I’m not sure why she chose to tell us this now, but it didn’t help my nerves.

Babs told us not to make any expressions of happiness as we rode down the volcano. A smile, shout, scream, or any other visage of excitement would land us with a mouthful of volcanic rock. We were given our tutorial on how to ride down our plank of wood (hold on to the rope, stay in the middle of the board and use your feet to brake) and then told to line up. And so we began our descent, two by two down the side of Cerro Negro. Butterflies fluttered in my stomach. I didn’t have a choice at this point; there was no other way down. I sat on my board and took in a deep breath. I hoped I wouldn’t wipe out as I kick started my way down the volcano. I watched the volcanic ash fly around me. It was a self-controlled roller coaster with no track or brakes besides my legs. I picked up speed as I hit the deeper incline. I had to keep mentally reminding myself not to let out shouts of excitement.

And before I knew it, I was at the bottom surrounded by my fellow fearless female travelers.

I couldn’t believe it. We had successfully boarded down the world’s most active cinder cone volcano! I wanted to go again. And I wanted to go faster. The rest of our Suave Dulce crew that didn’t join us up the volcano watched us slide down the mountain. Emily Rieman shot an awesome video of Jen’s ride down. She would be one of the record holders for the day, hauling down at a gnarly 53 km/hour.

I think we all made similar faces when we heard the group before us had been struck by lightning. Who knew volcanic ash is a conductor for electricity?

One of the best parts of the trip was the complimentary beer and cookie you received upon completing your ride. We all cheered and toasted our non-fatal descent as we loaded back up into our orange dune buggy.

The ride back through the sand dunes was almost as exhilarating, terrifying, and possibly more dangerous than our actual descent. We were thrown from our seats and forced into a game of musical chairs while trying very hard not to spill our beers.

I would walk back to my cabana late that night. My jeans were still sopping wet and I was cold, my clothes and dirt particles clung to my cold skin. I sat on my bed, and let out a heavy sigh.

Holy hell, what a day.

As I started changing for bed, I kept hearing the hiss of sand spilling out of the crevices of my clothes and onto the floorboards. I remembered Holly saying the day before that we would most likely be covered in volcanic ash at the end of the day. Sure enough, I was finding pieces of volcano in my bra.

I couldn’t help but smile. I mean, how often do you get to say that?

Read part one of this adventure at http://www.bucketlistpublications.com/2012/02/28/cerro-negro-part-i-a-dune-buggy-lightning-storm-thoughts-of-eminent-doom/

Read more from this author at: http://nomadgrad.com/