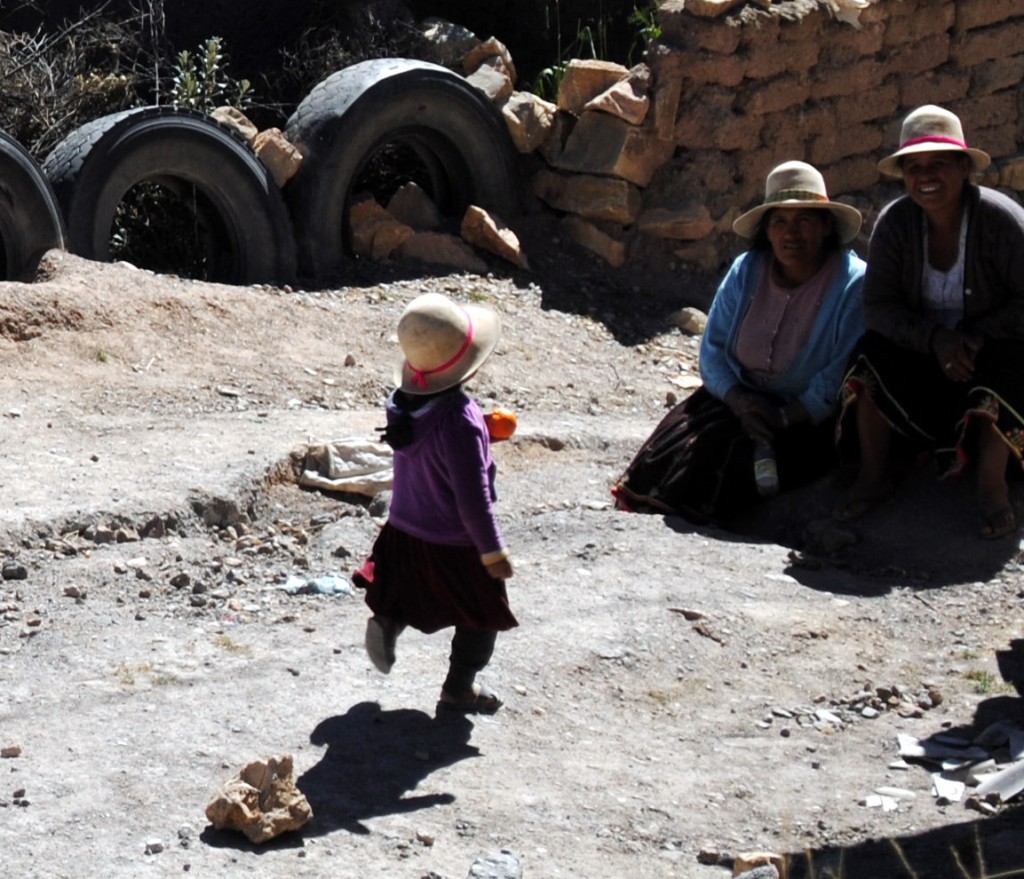 Many years ago, I veered my rental car through the streets of Rome, parked in front of my hotel, and swore I would not drive again until it was time to leave Rome altogether.  Escaping Rome with body and vehicle intact was a kiss the ground moment.

I recently survived another kiss the ground driving experience, but this time as a passenger. My driver was Sister Fulvia, and I was riding along to visit communities and deliver aid and amidst remote villages in the mountains of Bolivia.

I had been warned by past survivors that riding with Sr. Fulvia is not for the faint of heart. “She rides with God” I was told. Sr. Fulvia’s driving training began as a young nun chauffeuring her Mother Superior, aptly enough, through the streets of Rome. For the last 40 years however, the now 70 year old nun has pursued her mission while driving the mountain roads of Bolivia and Peru. Around town (Cochabamba), you might spot Sr. Fulvia negotiating traffic on her motorcycle – all the better to avoid traffic jams and tight spots. But for heading out to the mountain villages, we piled into a vanagon with drop-down benches on either side and plenty of room for supplies.

Five of us joined Sr. Fulvia on that day’s mission; two Dutch women at the end of six weeks of post college travel through Central and South America, a young woman from Norway revisiting the sites of her previous aid work in Bolivia, Anna, also originally from Holland, but who had been doing service work in Bolivia for many years, and myself. Anna was the conversation facilitator switching easily between English, Spanish and Dutch. Sr. Fulvia didn’t seem to care whether or not she was understood; she talked often and excitedly in Spanish with occasional bits of Italian thrown in. I understand enough Spanish to consistently trail the conversation and my Dutch is limited to singing happy birthday (unfortunately, that situation did not arise), so it was nice when the conversation rotated to English.

The actual pavement conditions on the main road were surprisingly good, the danger lay in the constant twisting and turning, the steep rise and fall, the lack of guardrails and the 1000 foot drops. Caution was definitely called for, but it seemed not to be in Sr. Fulvia’s nature. She would pass at will, oncoming traffic be darned, whether on inside curves, outside curves, uphill or down.

Adding to the danger was Sr. Fulvia’s penchant for delivering aid on the fly. Whenever we passed road workers or families walking

along the roadside, she would dig around in our sacks of supplies for a package of cookies, gum or an orange to heave out the window as we sped past. Since the process of rummaging for goodies, rolling down the window, honking the horn and throwing the treats takes at least two hands, Sr. Fulvia tended to let the car do its own driving. After a few close calls with oncoming traffic and precipitous cliffs, and even a quick adjustment of the steering wheel from Anna in the shotgun seat, we decided to take over the goody chucking so that Fulvia could concentrate on driving.

After surviving the main road, and subsequently a dirt track that was more trail than road, I was well rewarded. I was introduced to families scratching out a living in a remote and inhospitable environment with little or no access to any public utilities, services or education opportunities for their children. Where I did see schools and daycare facilities, I was told how families would make long treks daily or weekly to make sure that their children had the opportunity to receive supervised care and education while their parents worked the fields. Sr. Fulvia herself was responsible for the construction and operation of one such school and dormitory center where the children could spend the week and lessen the burden of an arduous daily commute. While there, we were treated to a visit with the children, a bit of lunch and the use of the newly installed bathroom facilities.

I will long remember Sister Fulvia and be grateful to her for showing me a world far beyond my previous experience — and for then bringing me safely back home.

David Weindling is the founder and director of Farther Foundation, a 501(c)(3) charitable organization that provides scholarships for educational travel experiences that inspire eager and deserving students to reach their highest potential.