Ten Reasons Why Traveling With Kids Is Cool 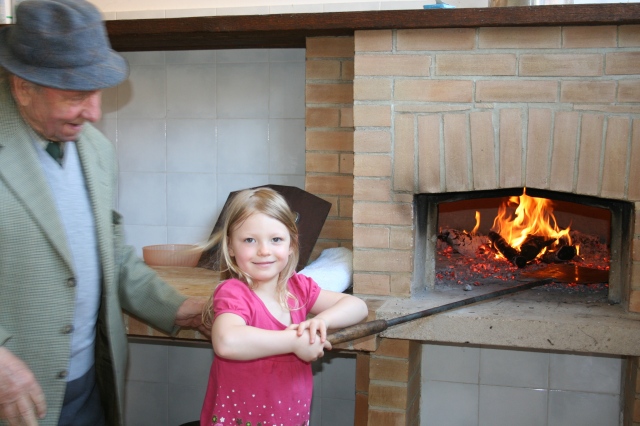 If I had a dollar for every time someone told me I was crazy to take my toddler to Italy by myself I would have never come back.  You are wasting your money; she will never remember anything.  She will be a mess on that long flight.  How will you pack everything by yourself?  She won’t stand going to museums or sitting through long dinners.  Jet lag, potty issues, getting sick, being bored.  I heard it all.

But one month after my daughter’s second birthday, I defiantly boarded a flight to Rome armed with a backpack of her necessities, one suitcase for both of us, a stroller and Benadryl.  I could see that look in the other passengers’ eyes.  You know the one.  Everyone hoping we were nowhere near their seat; thirteen hours with a small child in an even smaller space could be considered a version of hell on earth.  To the shock and relief of those around me she was an angel on the plane;  she devoured her ‘fancy’ meal, watched a movie and then proceeded to pass out.  I can’t say the same for many of the other passengers.

I quickly found out that traveling with my daughter did two things:  opened doors to experiences and got us free stuff.  People who would have done nothing more than complete their transaction with me or more likely not noticed my presence were suddenly whisking us behind counters and showing us part of the real Italian life I had not seen before.  We met dogs; we met grandkids.  We watered plants and learned to make pizza.  We held rabbits and petted goats. And I haven’t even gotten to the free stuff.   My daughter learned a simple smile meant extra scoops of gelato or little candies in her hand.  I don’t think I went anywhere with her that some old lady wasn’t trying to feed her.  She was the star at dinner, our waiters taking pride in her appetite.  Did I ever pay for dessert?  Maybe my own?

She loved the Roman Forum, although it was the beetles not the ruins that caught her eye.  Every new hill town was exciting; who knew how many kitties would be hiding in the narrow cobblestone streets.  Trains were a marvel.  Maps became new toys.  Piazzas her playgrounds.  My passion for travel deepened with each new discovery she made.

Maybe I was crazy and it is true that she doesn’t remember that trip, but my daughter has no fear of the unknown and loves new experiences.  I have since taken her back to Italy (see the photos below) and she now has her own travel bucket list.  The lesson to be taken here is that having a family does not mean your travel dreams are over.  They are just different.  I may not be able to travel as much as I did before, but I never use children as my excuse to stay home.  Travel is good for them.  They begin to understand the world is a bigger place and differences are to be celebrated.  Travel is good for you.  You will find indescribable joy watching your child experience another culture.

I could list the top ten reasons why traveling with kids is cool, but I think these pictures do a better job. Read more from this author at: Once in a Lifetime Travel