Roses are Red, Old Buildings Come New, This City is Sweet, So off to Jacmel we Flew! 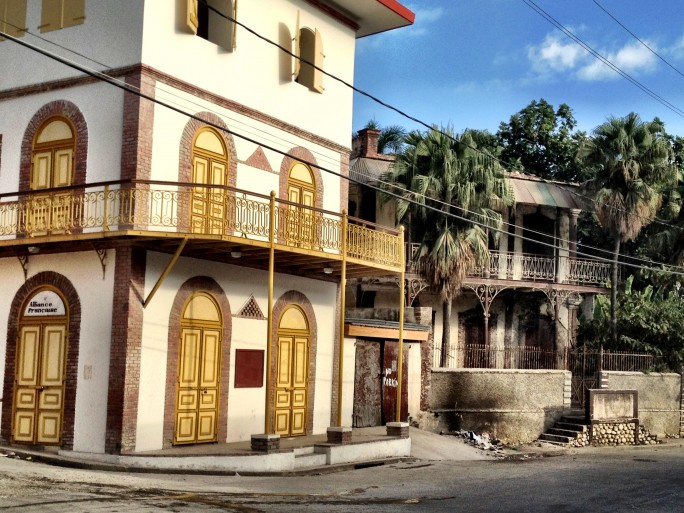 The first vision of Jacmel from the elevated mountain road reveals a small city hugging a dry riverbed and the South-Eastern Haitian coastline. From this distance, the city appears especially bright in the afternoon. At night, this same view reveals a glyptic burst of electricity against the gas lamp burning provincial belt. Descending into the city is exciting as clus

tered buildings materialize all at once. After reaching the stop-over gas station just outside the limit, the charms of old, crumbling buildings begin to tell a story of a colonial history, thousands of different uses, collapse and renewal. Our Valentine’s Day was marked by an impromptu motorcycle journey into the city by way of Kabik. As we zoomed and dodged along the generally flat strip we had no idea what kind of day was in store for us, but we trusted Jacmel’s reputation of being home to Haiti’s most laid back artists to fill our day with cool finds. What we did experience beyond our expectations is Jacmel as its own masterpiece. Every turn unfolded a new-for-us but actually old door, shop, hotel, or market of surpassing beauty that communicated a vibe of modest chill.

In reflection – after speaking with many of the young artists we met walking around or in their studios – the mental space of Jacmel relates a wealth of possibilities, local talent and galvanizing spirit. All around the city artists practice and share their work, entrepreneurs strive to achieve their next goal, and forgotten spaces gain new life in the imagination of an inspired person. The well-known Hotel Florita is a prime example, and a place we definitely would like to stay one day.

Tucked into one of Jacmel’s enchanting corridors is the original structure from 1888, largely unaltered save earthquake damage and modern plumbing. We could not have found a better place to spend some of our Valentine’s day. Knowing the street is lined by eager artists and finding an hour or so to enjoy the hotel Florita, which is a step back in time – felt like we were in the most romantic place in all of the Caribbean. Walking into the Florita incites mirages of stylish 1950s parties with posh women artfully whispering among themselves and men in fedoras trading jokes over large cigars. We sat down for a cold Coke, and to snoop around the rustic property. The Florita’s adjacent spaces are paradigms of the roofless Jacmelienne architectural ghosts. This is noticeable from the outside but dreamy from the interior.

I was told by a bartender that “on a clear night there are millions of stars in the sky” that must look amazing from the ground floor. Floating staircases leading nowhere relate traces of once existing floors.

Dilapidated structures turn to phantom limbs for the passerby who can only dream up the endless secrets stored in the invisible walls. Dreamy indeed.

The decay of the buildings reminds of classic Grecian ruins fitted on French colonial structures. What remains of three-story edifices are one-story walls festooned with cracks. The two upper floors of the Florita’s next-door collapsed after the 2010 earthquake, yet the ground level with pool and bar remains. It is the kind of space that would be the most chill place to be in New York over the summer, and the rustic feel naturally bears an effect that people the world round pay tens of thousands to achieve. We explored as much as we could – mounting the staircase blocked by an assertive flowering tree onto the bare-bones second floor. Nature has begun to reclaim these building as vines burst through walls and untended trees chew through the floor. That same appeal is visible everywhere outside. Brightly painted rusting doors rhythmically lining the streets are unclaimed works of art.

Similar roofless structures are being used by families, shops, artists and for events. We could not help but to be taken by the dynamism of the place, and soon found ourselves postulating about the price of one of the senior structures. No doubt many others who have locked eyes with Jacmel’s colonial charm have imagined similar scenes of grandeur. Presently many buildings around town are being privately reconstructed, and I hope that they are largely being restored to their ancien regime greatness.

Much to our pleasure we learned that the life conducted within the mysterious battered doors of Jacmel is as full as any anywhere in Haiti.

Artisans avail themselves of the openness and collaborate within studios with relaxed aspirations. At the FOSAJ school of art that we toured, lessons are taught to young and old artists alike, and there is a constant exhibition space. In this space we were granted an untainted insight to the progress of regional Haitian art. The craft papier-mâché and recycled (found) art are two notable movements within the artistic community that manifest in amazing masks and costumes. Jacmel has always been known as a cultural center of Haiti, and to witness the ingenuity and craft of many artists here is very compelling as their work marks the prevailing mentality of the city, which is vibrant and colorful.

From here, we wandered through the town to its local 24 hour market. The bazaar in the center of the city is housed in the most beautiful iron bodied town square. Here residents come to buy meat, seasonal vegetables, flip-flops, cell phones, tennis shoes, suits, cereal etc… (and they are presented in that order). The intensity of the experience within is memorable as it feels like there is never a still moment while people barter, gossip and trade. Though few would find this scene romantic in the conventional sense, we are the type of people who find the authentic, strange and dynamic corners of the world to be the most lovely.

We learned that day from a local that the talent and upside of Jacmel is finally being recognized by the Haitian government, which has sought out foreign investors to really engage and capitalize on the opportunity of the port city. According to some late evening research from home Haiti Libre reports: “During her visit in the metropolis of the South East, the Minister of Tourism has announced that the Venezuelan government has about $30 million to of make the city of Jacmel a real pole of tourist destination. “This funding should invest in the expansion of the airport of the city in order to transform it into an international airport and the redevelopment of the tourist port of Jacmel to accommodate cruise ships,” said Stéphanie Villedrouin.”

Once this money is distributed, it is a sure bet that Jacmel will take off. The small city has received a lot of attention from real estate developers in the last few years and it is already a highly trafficked destination for domestic vacationers. As the airport is extended to accept international flights traffic is expected to rise exponentially, which ought to spur further expansion. There are several existing plans of how to maintain the grace of this city while accommodating the celebrity it is sure to garner as a beacon of Haitian culture under its growth. One important lesson learned in Haiti is no matter one’s goals Haiti will almost always change you before you change it. Without this first internal transformation the aforementioned intentions will become fragile caprices. In the case of Jacmel, one can fall in love by walking and walking. But to truly understand the place talk to the people, engage the artists, find your favorite building and do it with someone you care about. Hopefully most who invest in the city will maintain a culturally sensitive approach to building that retains the order given by the existing system. In Jacmel, what is old is now the frontier and the new age of pioneers & artists are responsible to ensure the character originating from its history is not lost in the excitement of new development.

Read more from this author at: www.ayitipapperi.wordpress.com