By: Jennie Posted in: Adventure, Animal Encounters, Destination, Thailand, The Kingdom of Laos 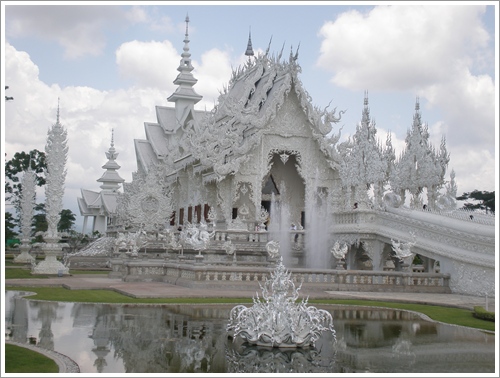 With a Friday off school for the Queen’s birthday, I though I would make the most of the long weekend and explore more parts of the North of Thailand and Thailand’s famous ‘White Temple” as well as the city of Chiang Rai.

Me at the Hot Spring- Chiang Rai

On the Friday afternoon, I took a bus to Chiang Mai just under 200km west of Phrae, seems slightly backwards if you consult a map of Thailand and see I was heading to Chiang Rai… just under 200km NORTH of Phrae. However I found a tour which incorporated everything I wanted to do in Chiang Rai…. in the space of a day!! It made for a ridiculously busy day but I got to see and do much more than I could ever have expected!

The tour picked me up in Chiang Mai at 7am and I was joined by a Dutch family, a Spanish couple and a French  family – 10 of us in total along with 2 of the Thai tour guides which gave me a great chance to use my newly learned Thai speaking skills!

We drove for an hour and a half and arrived at our first stop… Chaing Rai’s hot spring! If im 100% honest was a slight anti-climax. We had been billed for a ‘glorious natural wonder’ and when we got there we found a few tiny pools of water, a fountain and a water garden in the middle of a car park surrounded by shops selling all sorts of Tat.

Now don’t get me wrong the water was very hot (around 80-90 degrees) and it was quite interesting to watch the locals cook eggs in the water for the tourists as well as bamboo. I don’t know what I was expecting but this wasn’t it.

We got back in the van and drove another hour to Wat Rong Khun. Thailand’s famous ‘White Temple’. Now THIS was impressive!!

The Story behind the temple is as follows. A boy from Rong Khun went to university in Bangkok studying architecture. He travelled to London and build a

Anywhere you go in Thailand you are always surrounded by temples and it is easy to stop noticing them after a while. There are so many for a few reason.
1- they were old schools usually attended by men.
2- They were hospitals.
3- They were used to store herbs and spices
4- Used as a meeting point for villagers
5- For the King of the area to show his power.

Guardians of the moat surrounding the temple

However the White Temple is unlike any other I have seen; for starters, it’s white (if you couldn’t guess by the name!) its unfinished and still getting worked on, the inside is paintings of recent events (I will come to that) and it has a clear heaven and hell. It is stunningly beautiful.

The temple is surrounded by a ‘moat’ which is filled with ‘mythical fish and serpents’  you then enter ‘hell’ looking you can see the guardians of heaven and below coming out of the ground are hands that are in hell. It really is a sight to see. You cross over hell and all its creatures and enter ‘heaven’ this is over the bridge. Really is something!

Walking over ‘hell’ with the hands coming from the ground

Unfortunately, the next bit you are not allowed to take pictures so you will have to use your imagination. You walk into the room and in front of you is a monk meditating (the most lifelike waxwork I have ever seen!) On the four walls of the room only one is painted, one currently being painted and the other two bare…. This is the part of the temple that is incomplete.

The wall that IS complete is quite hard to explain. Its a reflection on the world with hundreds of different scenes. All around are effects of global warming and pollution, with superheros scattered everywhere. The likes of superman, spiderman, Doreman (lol) Ben 10, Tomb raider, Michael Jackson, Star wars… you name it they are there! These are to show that whilst we might like the thought of these, in real life there are no superheros… just us.

You then move over to the twin towers and the plane that crashed into it, falling from the sky is rain…. but actually its thousands of missiles and bombs- signifying the wars going on in the world. If you look above the scene you can see eyes looking down on you…. but if you look close there is a person in each eye…. one eye had George Bush and the other Osama Bin Laden to represent the war or terror. Above them again is a skull representing death and the death of the situation, then look at the top and you see the Buddha image restoring peace. Like I said… very hard to explain but really is a piece of work!!

After the delights of the Wat Rong Khun Temple, we got back on the bus and headed to the Golden Triangle.

This was something that I wanted to see however I got more than I bargained for!!

We arrived and it was blistering hot!! We got a bit of history on the way there about why it was called the golden triangle and the purpose it used to serve…. that and how to make opium (something I wont share!)

The long tailed boat I was on

There are 12 of these “triangle’s” in the world, where 3 countries meet at one point. However Thailand’s triangle has a bad reputation for selling drugs, mostly opium and heroin. As there were the 3 countries there was not a single currency so the drugs were traded for gold… hence the name “Golden Triangle”

We took a long boat out into the water and watched the Golden Buddha of Thailand shrink into the distance. To our left was Burma (or Myanmar), to our right was Laos and behind us Thailand. We passed no mans land which was now really just over grown grass but which was once a hub of activity. We passed Win&Win Casino on the Burmese side then “Laos-Vegas” on the other side, as gambling is illegal in Thailand, Thai’s can cross the river and go to one of these casinos!

The boat finally pulled in and I was no longer in Thailand but in Laos!!!  This small part of Laos didn’t require a proper visa just 20bhat (10p) and a tiny slip of paper to say you were allowed in the county. The place was full of kids asking for money and loads of little markets… all duty free!

Cobra whiskey! This was ‘marinating’ the whiskey!!!!

The tour guide took us (well the adults) into a tiny hut and said  we could sample the local delicacy…. Whiskey… and wow…
First one he got the shot glasses and before pouring whiskey in each he got tongs and pulled out a HUGE cobra which was ‘marinating’ the whiskey. If you drink this it is meant to give you strength and good health. Was quite disgusting but the whiskey was not bad!!

Next, they pulled out an armadillo whiskey, gecko whiskey and then a turtle whiskey!! I never had any of these but their were full animals in the big glass case holding the whiskey.

Tiger Penis whiskey – To think I drank the whiskey that was in!! :/

And then the one that had me in fits of laughter….. Tiger Penis Whiskey…. and Yup you guessed it…. marinating the whiskey was a (huge) Tiger Penis!!!! I had to try some as not many people can say they have ever experienced something like that…. and surprisingly was quite nice… even more surprising was that I was the only one willing to try it!!!

Deciding I couldn’t go back to Thailand without something I bought a small bottle of the cobra whiskey as a pressi but have had to wrap it up as it’s quite creepy to look at!!

They went through a few others but after 3 shots of Whiskey I decided enough was enough… the boat was rocky enough without adding whiskey into the equation!!
After around 30 minutes on the island, drinking, shopping and doing something else I can’t say for now or else I will ruin the surprise, we got back on the boat and headed to Thailand. We stopped off for a beautiful lunch and then headed to the next stop… Mae Sae!

This is the official border between Myanmar and Thailand and is the most Northern part of Thailand. I couldn’t cross this border due to my visa and work permit but we went around the markets for half an hour then it was back in the van and onto our last stop!

Most Northern part of Thailand

The Karen Long Neck Ladies was something I really wanted to see however as with the hot springs it was slightly disappointing. Instead of seeing the ladies in their tribe they were all manning stalls of scarfs they had either made or bought at the market… Another victim of tourism I suspect. However their story is interesting.

The women wear the rings (which is actually a big coil) to protect their necks from the mythical tiger which bit the women on the neck killing them. No women= no babies= no tribe! They start to get their rings from aged 5 and get them changed every few years adding on one or two each time. Although to change them they have to unwrap the coil and replace it with a new one. The coils are very heavy and instead of making the neck longer it actually pushes the shoulders down giving the illusion of a longer neck.

Me and the ‘most beautiful’ long necked lady

We met the “Most beautiful woman” in the village who wore 25 rings, she was so petite and skinny and her neck looked ridiculously long.

We were told that the women never take these rings off except for at certain times in their life.

Me and the twins from the tribe

It was an interesting history behind them and it was interesting to see however it’s not something that I would heavily recommend as to do on its own is rather pricey!

After we visited the tribe, I was dropped off in Chang Rai while the rest of the tour went back to Chang Mai. The next day I toured Chang Rai on my own for a bit…. even went to get myself my first haircut since coming here!! Was a very interesting but tiring day and by the time Sunday came I was quite glad to be back in Phrae!

Read more from this author at: http://teacherjennie.wordpress.com/