Roll out the Red Carpet Please… 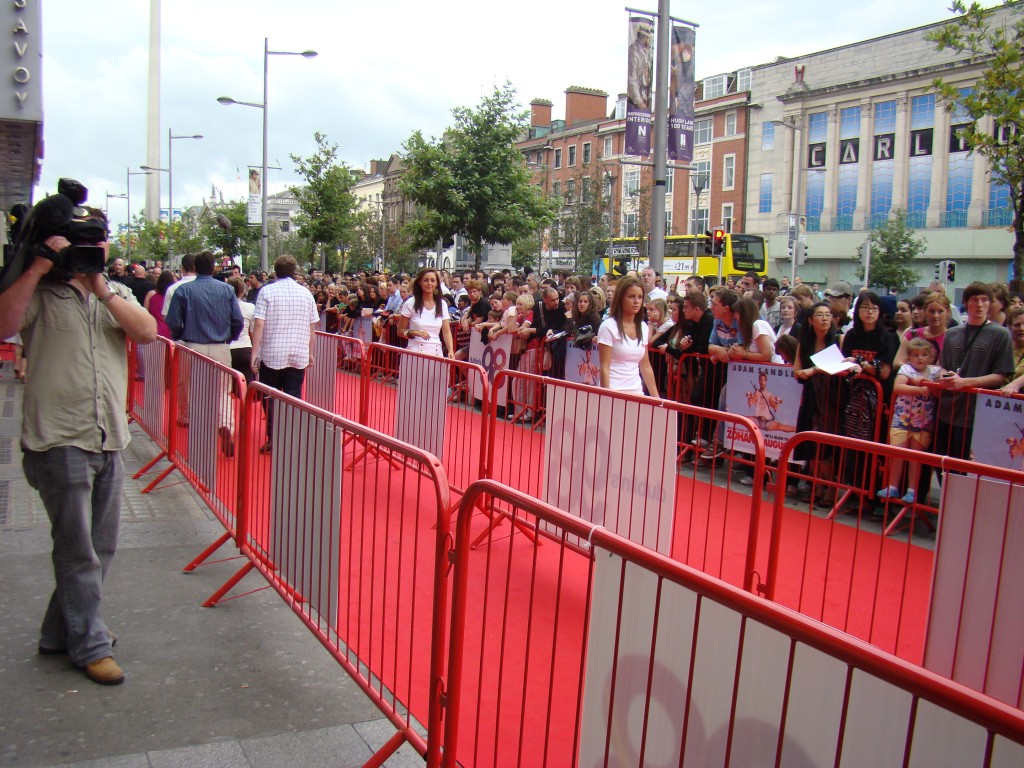 drinking, traveling, sleeping in tents and cars, and about 3 hours of rest a night. The best I could come up with was the movies. We hadn’t done anything with a hint of normalcy during the entire trip. A day at the movies was just want we needed, but we ended up getting a lot more than we paid for.

I was going to change from the clothes that I wore the day before, but I no longer saw the point. Everything that I had with me was equally dirty, worn, and nasty. We were very familiar with being in dirty clothes. As we walked down the street, I noticed several other people that looked like they were wearing bar clothes. I assumed that they were doing the walk of shame that occurs after hooking-up at the bar the night before. Their presence made me feel better about myself.

We walked into the movie theatre on O’Connell Street and purchased our tickets. The lady at the counter was friendly like most Irish people. She handed me the tickets, smiled, and said enjoy the movie. I smiled back and said thank you.

“That attendant was rude. He just shooed me away. You should say something to him,” I said.

“I don’t think that was an attendant. He was wearing a nice suit, was more ripped than a wrestler, and he had an FBI style earpiece. I don’t think saying anything to him is a good idea,” my husband replied.

“Maybe there is someone famous here.”

“Well, there’s no one around.”

We didn’t think any more about the rude man and we loved the movie; it was all that we could talk about as we walked down the stairs.

A red carpet was laid out at the bottom of the stairs. Music was playing and several security men now lined the theatre entrance. I walked up to one of the security men and asked what was happening. He said, “Are you serious? You don’t know what’s going on, really?”

I told the guy that we’d been backpacking for months and we had no idea what was going on.

He said, “It is the premiere for You Don’t Mess with the Zohan. Adam Sandler is going to be here in about 30 minutes.”

“Really. He will be here soon.”

After realizing that we were Canadian and telling us how much he loved Canada, he told us that he’d bring us to a press and media area where we could hang out when Sandler arrived.

We repeatedly thanked the guy and waited in the movie theatre with disbelief.

This is unbelievable. I love Adam Sandler.

The fans lined the street and pushed through the crowd to make their way to the front. They heard about it on the radio for weeks. Some people called frantically to get tickets to the premiere and they were dressed in their finest clothes. Reporters and photographers were there taking pictures and covering the event in front of a camera grew. We were at a Red Carpet Event and all we had to do was go to the movies. It was the epitome of being in the right place at the right time.

Welcomed by cheering fans, Adam Sandler and Rob Schnieder appeared on the carpet. They both worked the crowd by signing autographs, posing for pictures, and talking to the hoards of happy fans.

It was a surreal experience, and I was star struck. I was standing there watching them so intently that I almost forgot to take pictures. I did manage to get a perfect picture of each of the celebrities separately, and Adam Sandler’s autograph. We also snagged tee-shirts that were the perfect keepsake, and it covered my scraggy, stained tee-shirt.

They made their way into the theatre and we began walking back to the hostel.

“That was awesome! I can’t believe how lucky we were to just be there,” I boasted.

It turned out to be one of the most exciting days in Europe and we only planned on going to the movies.