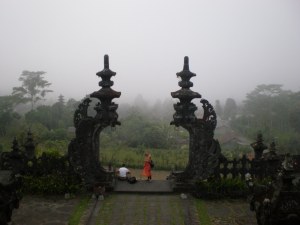 I LOVED this place! It was coming to the end of my travels by this point, and perhaps I was just feeling particularly appreciative, but I really did have a wonderful few days here.

I arrived to Ubud after a very long day travelling from the Gilli Islands around 9pm and began wondering the streets in search of a place to stay. I found a lovely little place on Monkey Forest Road (a really good location) that was in a beautifully floral setting and even had a HOT shower-as soon as I knew that it was sold! A week of cold, salt water showers on Gilli was more than enough!

In the morning the mission began to find the medicine man from Eat Pray Love, which actually didn’t turn out to be too much of a mission after all. That was a wonderful experience [see entry http://lifeasabutterfly.wordpress.com/2011/10/11/stepping-into-eat-pray-love/] and I had a lovely morning. In the afternoon I decided I would walk from the medicine man’s house to the monkey forest. In theory this was a really good idea, being a good walk but not too far, however it quickly became too far when I took the wrong turning!

I get terribly frustrated when I get lost on walks, because it is often hard work to get back on the right track, however I do kind of like it too. Getting lost enables you to see so many more things that you hadn’t anticipated, and things that are often not in the main tourist trail. For example on this walk I saw a naked man bathing in the river, I got to see the strangest creepy looking statue that resembled something along the lines of the Hulk, and I got to go in one of the local families house! In the end I paid a Pound or so for a very kind lady to take me back to where I wanted to go on the back of her moto, and considering the distance by which I had gone wrong, that was a very good choice!

Random statue on the route to lost

She dropped me off at the Monkey Forest where I went in to see what all the fuss was about. And what a lovely place it was! I have never seen so many monkeys in one area-it was incredible! There were the cutest little baby monkeys, there were old fat monkey and there were LOTS of cheeky monkeys! They were running around playing, eating bananas, jumping on people (I would have freaked if they jumped on me but it was very funny to see them doing it to other people!) and playing in the water. It was fascinating to watch.

There was also a monkey temple and graveyard, with little monkey graves!!!! I never thought I would see the day I would be visiting a monkey graveyard! There were also lots of statues around the forest, however they had a somewhat eerie feel about them. Perhaps it’s because they all seemed to represent death- for example there was one of this monster with its long tongue wrapped around a person killing them!!! I am used to the nice, calm and peaceful temples of Thailand and Cambodia, I didn’t like the feeling I was getting from these temples, they seemed evil, and it did put me on a edge slightly!

Talking of temples I did get to see lots more! I went on a day trip while in Ubud to see the local temples, I can’t remember the names of them all but it included the elephant temple which was a cave that was supposedly the shape of an elephant, although I’m not sure I saw it!  It also included a trip to the water springs, where local people were going to bathe, I don’t know the exact story behind it, but I believe the water is sacred and has healing powers etc. It was lovely to see, and really non-touristy which was nice-it was not even in the Lonely Planet!!!

Bathing in the hot springs

We also visited the biggest temple of the island, which was nice. I have seen so many incredible temples on my travels, I wouldn’t put it in with the best I have seen, but it was nice to see. It was also nice to see that it was being used for ceremonies and religious purposes, not just for tourism. The temple was made up of lots of separate buildings, and we walked right up this hill to a part of the temple that was really high up. There were not many people here at all and it was even more eerie than any of the temples I had seen before, with the mist so low that we couldn’t see past the bottom of the temple, it really did feel like a scene from a horror movie!!!

Eerie views from the top of the temple…

We visited a HUGE area of rice paddies that was very beautiful, and ate lunch overlooking the spectacular view.

Visiting temples in Bali was quite different from everywhere else I had been in Asia. Normally you would have to make sure that your shoulders are covered to visit the temples, however here you need to cover your legs and it didn’t matter if you had a vest top on revealing your shoulders! Everybody had to wear a sarong when entering the temples, even the men-it was very different from what I had experienced before!

During the day tour, I met many lovely people, and they were all very good company, it was nice to spend the day with them. There was an older couple from Italy, a couple from Switzerland and a girl from Finland. As well as the temples, we also went to the see active volcano on the island, where there was spectacular scenery, and paid a visit to a coffee plantation, where we learnt all about cock fighting and how the local people gamble over it, and we learnt about lots of different types of coffee and spices (including the coffee that you make from a cat/fox type animals droppings..eeeek!). It was all very interesting.

Ubud was a lovely little place that had some lovely restaurant’s. It is not a party place, so suits me in that respect, but there were many nice bars and restaurants to grab something to eat or drink. Some of the places were set a little back from the main street and were located practically in the rice paddy fields-they were wonderful!

One evening, I went for dinner at a beautiful little place, out in the paddy field and lit by candle-light. I had only been sat there a few minutes when a very nice French man came and asked if he could join me because we were both alone. So we sat talking for a while and then an English girl came and asked if she could join us because she was also alone. It was nice to sit and chat for a while with these two, and never in all of my travels have I had people come and join me over dinner in such a way! It was nice.

I went to see a traditional Balinese show, and it truly was fabulous!! It was set in a stunning building (that I believe was the community hall), that had beautiful intricate detail and carvings. The dance was performed by women only, there were about 50 women in all, most of which were wearing blue and pink outfits and sat around the edge of the stage playing various instruments.

The music they played was very distinctive; I immediately recognised it from here on when I heard it being played in restaurants/shops etc around Bali. They had an instrument, although I’m not sure what it was called that really stood out and made the music so unique. It was lovely.

There were dancers throughout the show, they had fabulous costumes and make-up and looked truly beautiful. The dancing was just as unique as the music and was absolutely brilliant! Similarly to the puppet show in Vietnam, the dancers were focused around particular aspects of Balinese life, for example there was the Warrior Dance that was about Balinese men being strong, there was a dance about women who sew, showing how hard they work, and there were many other fabulous dances. When dancing they did this really weird thing with their fingers where they would move their little finger and the one next to it together (which I certainly can not do!) without moving the rest of the fingers, and they would also move their eyes in a really creepy way!! There are a lot of eerie things about Bali!!

I really enjoyed my time at the show, in fact I really enjoyed my time in Ubud. Because I was soon to return home I bought lots of things to remind me of my wonderful time in Bali including clothes, incense, crystals, ornaments…the shopping really is great!!  I had an incredible few days in Ubud, and I felt so happy and content with everything. I felt that it had been a wonderful last travel destination. Now I would begin my journey back to the UK, with a few days in Dubai breaking it up. I am officially on my way home.

Bali has inspired me in many ways, in terms of self-peace and tranquillity, relaxation (I spent lots of time in the wonderful spas!!) and especially yoga. After seeing a yoga teacher traininer course advertised in Ubud it has really got me thinking about how this is something I would love to do. I will give it some more thought, and perhaps one day I may even return to Bali to learn to teach yoga. I loved Bali, it was simply spectacular, it was just perfect. I would recommend a visit to anybody. I was officially in love with this place-it was amazing! : )