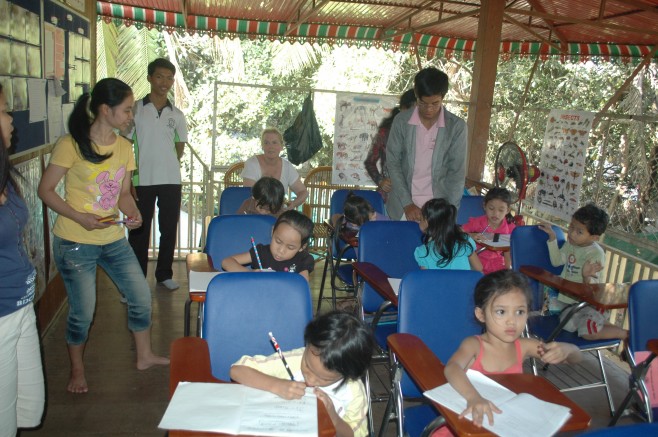 A lovely lady who introduced herself as Sochenda Kann greeted me. I was hot and weary after having been unwell with food poisoning a few days before. I had been in Cambodia for four days. Only a week before I had been freezing in England without the vaguest idea what Cambodia would be like. I could never have imagined that this country would steal my heart completely and that the children of Cambodia would become extremely important to me. As I opened the gate to shake Sochenda’s hand I had no idea that this visit would change my life.

Cambodia has a way of reaching your heart in a way that no other country seems to. At least that has been my experience. I had no idea what to expect but what I hadn’t expected was the smiling people that I met there. I had been home no less than two weeks before I made arrangements to return. It is not often we get an opportunity to make a difference. This was mine and it can be yours too. I hope after reading this you will also decide to do something meaningful for the people of Cambodia from your own home.

I am fortunate enough to know people who are attempting to make a difference in Cambodia and it has given my husband and I the opportunity to see things we may not normally see. One of these people is my stepson, James, who works in the emergency department of the Provincial Hospital in Siem Reap as well as teaching and training there. On our arrival last December, my daughter in law asked if I would like to visit an Orphanage where a friend was a member of staff. I immediately said yes. The following day we travelled in the tuk tuk for my first visit. I had stupidly visualised the Orphanage as being huge and rather monolithic, like something out of Jane Eyre. I couldn’t have been more wrong. After travelling along a very bumpy track and a bumpy track in a tuk tuk is no fun let me tell you.  I certainly lost a fair amount of my diet coke on the way, we pulled up outside a traditional Cambodian house that was as far removed from Jane Eyre as one could get.

‘Hello,’ welcomed Sochenda in her broken English. ‘Thank you so much for visiting.’

I removed my shoes before entering the house and had just got them off when the children ran to greet me. I followed them inside where they pulled me to their books and toys. Some were quite shy and just watched me, while others were keen to go outside and play ball. I sat for a short time with the youngest baby there and then saw a child who was clearly distressed and very unwell.  If anything brought my life into perspective this child did. Her skin was blue and her eyes sunken. This distressed me so much that I felt an urgent need to run from this situation that I could do nothing about. I forced back my own tears and asked my daughter in law what was wrong with the baby. With Sochanda’s help, she told me that Leangim, normally called Gem, was abandoned by her mother. Her father is unknown.

A midwife who helped Gem’s mum to give birth took pity on her and decided to adopt her. Unfortunately, eight months later Gem became really sick and the midwife and her husband brought her to Kuntha Bopha Hospital to get medical treatment. The doctor’s found she had a serious heart defect and needed an operation which could not be done in Cambodia.  With hope and love for Gem, the midwife sought help from any NGOs that could save her life.  She found the Children’s Sanctuary.

For the first time in my life, I felt so helpless. Here was a child so very sick and there was nothing I could do.

A week later I returned with my husband. No sooner had we stepped into the courtyard, then children began shouting hello to us from their classroom high up on the balcony of the house which is located alongside the Siem Reap River. I have never felt as welcome as I did that day and I only wish I could have been armed with more than just biscuits. The children had just started their lessons. They sat quietly listening to their teacher while occasionally posing for me when they realised the camera was on them. I had the pleasure of playing with the children on my first visit and reading to them from the collection of donated books on the shelves. This time I sat in on their class and again I could not resist photographing their happy faces while wondering how I could contribute to their lives. I asked how Gem was and she was brought out looking a lot better than on my previous visit, but still very sick.

Cambodia is a poverty stricken country and everywhere you look there is malnutrition. Many of the children here originate from impoverished rural villages and most children coming to the Sanctuary are orphans or have been abandoned by their families. When visiting the sanctuary it is almost impossible not to fall in love with the children. I pointed my camera again and Srey Roat Heng smiled proudly at the lens.

‘We found in her mother’s lap whilst she was begging beneath the scorching summer sun. She was only three months old.’ Sochenda told me.

‘Her mother was hungry and her breast milk was diminishing fast. She could not afford infant formula, had no access to clean drinking water and no facilities to keep bottles clean. Srey Roat and her mother now live with us and for the first time in her life, mother Mao is receiving a regular income for her work as an assistant at The Children’s Sanctuary.

It is thanks to an Australian couple, Dawn Cornish and her husband Doctor Andrew Clift that the vision of a home for abandoned children was realised. I contacted Andrew on my return home and he quickly put me in touch with Dawn.  Andrew Clift visited Cambodia in 2006. The couple had already worked with HIV infected orphans in Africa and Thailand. They decided that Cambodia was one of the neediest countries they had seen. Following their vision, Dawn set off establish The Children’s Sanctuary in Siem Reap the following year. Four years later I would visit and feel an overwhelming need to meet Dawn and Andrew who share their life with the first child who came to the orphanage and whom they adopted. Dawn has worked in nursing and medical recruitment and management and has studied international and community development. She has worked overseas particularly with AIDS orphans in Asia. Andrew Clift, meanwhile, has worked in ten countries for government, non-government and United Nations organisations. His work in remote Australian communities, five years’ work with orphaned and abandoned children, as well as hospital and project management, assists his CSI work in Cambodia.

Within a month of Dawn returning to Cambodia, the venue for the orphanage had been found and renovations took place. Their first baby arrived weighing just 2.2kg. Shortly after, others followed. Abandoned babies were taken in, as well as others with cerebral palsy, HIV and epilepsy. Dr Andrew Clift described the following two years as a ‘Big adventure’

‘Many of the children in the orphanage originate from impoverished rural villages where their families live in conditions of extreme deprivation,’ Dawn explained.

‘Most of these children are malnourished, many severely, and significant proportions have other illnesses, most commonly infectious diseases.’

Despite significant improvements since the end of recent conflicts, Cambodia still remains one of the world’s most impoverished countries. Most families survive on less than one dollar a day and children are the ones most affected by the poverty. The under-five mortality rates remain very high. Half of all Cambodian children suffer from malnutrition. Less than half will complete primary school.

When a child is taken into care at the sanctuary, the main objective is to address any health issues. The children are cared for by the Sanctuary nannies and what wonderful people they are. All are trained in first aid and health care with emphasis upon hygiene. A doctor and nurse visit the children on a regular basis to check on the children’s health and progress if they are on treatment. Full dental care is also provided for all children. But, as always, money is a problem. The Orphanage depends solely on donations and sponsorship. I met the staff first hand and was so impressed. It was hard to control my emotions in the face of such caring dedication. Since its establishment Dawn Cornish has welcomed sixteen children into The Children’s Sanctuary in Siem Reap but she has also supported many children in a local village school and assisted people who have needed lifesaving operations. Her husband, Andrew Clift, has supported this venture by working in outback Australian and Pacific hospitals. One person helped by The Sanctuary is Srey Cheak, who has thalassemia, an inherited blood disorder requiring regular blood transfusions. She is being assisted by The Children’s Sanctuary for her medical treatment.

A few days before writing this article I emailed Sochenda for some background on the children. I was thrilled to read that thanks to the efforts of Dawn and Andrew, Gem underwent major  cardio-vascular surgery at the Angkor Hospital for Children on Friday, 23rdMarch 2012 under the care of the visiting Singaporean cardio-thoracic team.  The surgery was a success, which means Gem’s symptoms should dramatically improve and her life expectancy extended. Gem is due another operation in December this year and hopefully this will also be successful.

On my journey back, I realised that I could help in more ways than I had at first imagined. I could write about the sanctuary and bring attention to its needs. For a small amount each month I could sponsor a child there.

The Children’s Sanctuary Incorporated (CSI) strongly believes the best place for a child is within his or her own community. It works together with families and single mothers who are wishing to relinquish their child due to their circumstances, and find solutions to avoid separation. The children, who are a part of the CSI family, are those who have nowhere else to go. They are either true orphans, have been abandoned, are seriously ill, or were living in a high-risk environment. The children under CSI’s care receive a secure and loving home, a balanced diet, high-standard health care, private education supplementary classes and weekly outings

I hope I have encouraged you to do something to help. I will be returning to Cambodia in July to work as a volunteer in the hospital where Gem had her operation. From my photos you can see how happy the children are. During our visit we saw the children receive gifts for their outstanding work in the classroom for the past year. Visitors are very welcome at the Sanctuary provided prior arrangement is made and you can help with the lessons if you wish.

My time spent with the children was very humbling and visiting the sanctuary certainly puts things into perspective. When it is time to climb back into the tuk tuk, both the staff and children come to wave goodbye. It is a visit I shall not forget.

For information on sponsoring please visit the sanctuary at www.thechildrenssanctuary.com

Lynda Renham-Cook is associate editor of the scavenger.