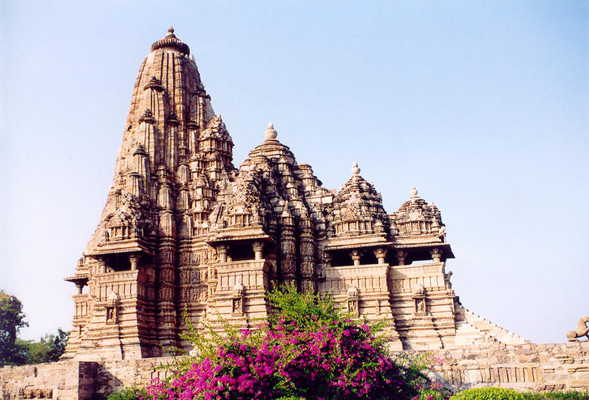 A full moon night, a lotus filled pond and a beautiful lady alone bathing in it. The moon god gets seduced with her intoxicating beauty and comes down to the earth. With arrival of dawn, when he is about to leave, the lady has one question in mind – how will she survive in the society bearing such a sin? The moon good promises “Your son will be a great King. He will build numerous temples and gardens. He will be known in the entire world for his bravery, intelligence and achievements”.  The lady flees hundreds of miles away and in the middle of a wild jungle gives birth to the great King, Chandravarman. She cuts all possible links with the external world and concentrates completely on the upbringing of the child being the only source of information, education, care, love and courage.

Sounds like a story? Well, it is a thousand years old legend and it is alive even today through one of the greatest creations of human beings of all time – it is UNESCO world heritage site – it is the great Khajuraho.

King Chandravarman built 85 temples in the middle of the wild jungle and thus started the great Chandela dynasty. “Chandela” finds its origin in the term “Chand” which means the moon. Unfortunately, only 22 out of the original 85 temples have survived today. But even 1 out of those 22 is enough to change your perception about the extremity which a stone structure can define. I am not a historian, neither am I an architect. But to understand the amount of impossibility of perfection that Khajuraho temples demonstrate, you don’t need to be either of them. From 13th century till 1838, the ruined temples were lost in the mist of the deep jungle until a British engineer came to know about this place from a local labor and decided to explore the wonderland.

I made a plan to visit Khajuraho in December 2011. It was winter time and being a warm-blooded guy, I always feared winter of central part of India. But still I wanted to make it this time as it was always in my bucket list. I spent quite a few hours on planning my itinerary. I received some expert opinion on why I should spend no more than a day there and that the temples are nothing but erotic stone structures. Really? Are you kidding me? Khajuraho is nothing more than stones? It was good that I did not listen to them – I made my mind to spend three days and nights and explore all 22 temples. My decision was right – what I came back with was treasure of my life.

The temples are broadly divided into three groups – eastern, southern and the most prominent western group. The eastern group contains three Hindu temples – Brahma, Javeri and Vamana and four Jain temples – Ghantai, Adinath, Shantinath and Parsvnath. The Brahma temple is the second in the world – the first one is in Pushkar, Rajasthan. The Ghantai temple originates its name from the bell kind motifs engraved on the pillars. You get awestruck by the perfection of the designs carved on the stones – each bell design is perfect, is strikingly similar to each other and bears a glimpse of what it was thousand years ago. My auto rickshaw driver did not consider Ghantai temple as one of the places to see. According to him, it was set of few pillars just waiting for their turn to taste the soil. But I insisted on seeing it and reluctantly, he drove 1 km extra to take me in front of Ghantai temple. The main small hall of the temple is now thronged by few local villagers – they use it for sleep, gossip, meeting place, melting pot, smoke, dry clothes and may be some more. Ghantai temple, with all its past glory is only surviving as a multipurpose utility tool and just waiting for its turn to break down into pieces. You won’t have to pay anything to visit it – no entry fee, no protection from external damage, no care – nothing! Alas, my country!

The western group temples are best preserved. Here you have to pay an entry fee of 10 Rs. Such undervalued treasure! It is the same me who paid 13 Euro (close to 800 INR) to climb to the top of Eiffel Tower, who paid 20 USD (1000 INR) to visit body museum in New York and it is the same me who is paying 10 INR to spend an entire day in the western group of temples. Other destinations are great in other parts of the world; I have no intention to undermine them. But I just feel sorry about the amount of importance we give to the greatest creations of human beings that are abundant in India and no one even wants to pay some small attention in preserving them. The western group is comparatively better preserved though – there is an attendant in each temple who can tell you the history of the temple, can show you the stone sculptures and their meanings which you otherwise tend to overlook and ignore.

When you visit the temples, the first question that comes to your mind – “how was it made”. Each temple of Khajuraho is loaded with sculptures. Deities, demons are there everywhere – but that’s true for any temple in the world. The biggest striking difference is the portrayal of eternal human emotions. This is the very reason Khajuraho is one of the UNESCO world heritage sites – because of creative human genius.

Khajuraho even today is nothing more than a small village. Since it is visited by foreign tourists, it now offers croissant, internet, Swiss chocolates and premium coffee. But the basic facility of the city is still no more than that of a village. The question that comes to my mind is – how in the earth, how thousand years ago, this place was accessed by the king and his people? How did they build such massive temples with that kind of perfection? How did they know the geometry and physics to understand what should be ideal load bearing capacity of a pillar to withstand thousand years of storm and rain and thunder? And the biggest question – how did they bring such emotion out in the stones? I keep wondering – how? how? how? No one knows.

I keep loitering and there is a surprise waiting for me in every corner. The mountain like architecture of Kandariya Mahadev temple, the passionate figures of Laxman temple, the simple yet stunning Chitragupta temple, the statute of the lady taking out a corn from her feet – there is surprise everywhere. In Khajuraho, humans are the biggest focus – that’s why you see moments of their lives immortalized with magnificent artist work. You see battalions of soldiers gearing up for the war, you see someone losing life under the big fat feet of an elephant, you see a soldier doing the last good-bye to his family, you see a king being greeted by the countrymen, you see pride, betrayal, passion, desire. Each sculpture of Khajuraho shouts out to prove its existence.

I get awestruck with this

When you take a walk alone through the lanes of the temples, you feel that the stones are not dead. They are alive – they are breathing! A dead piece of material cannot portray such emotion. The beauty of the lady cannot be shown more vividly. The lady doing her make-up catching a mirror in one hand in an ancient stone statue and putting an eye liner to her eyes is impossible – it may seem to be very easy today, but it certainly not was….. The same comment holds true for the erotic sculptures – they are so candid, so vivid, and so lively that you get awestruck when you see them. Khajuraho temples were just not for worshipping the god, but they were more meant for portraying the greatest human desires in most simple, eloquent yet blatant way. That is the beauty, that is the uniqueness, that is Khajuraho.

The lady with a mirror

The lady with a mirror

My favorite – look at the lady applying eye liner

Spend at least 3 days in Khajuraho – if you are satisfied in 1 day, then you have not seen it. Light and Sound show is a must.

Khajuraho is now connected with rail, though a comfortable 3 hours car journey from Satna is preferred.

Now the village has an airport – so you can reach easily by paying extra cash. International airport is in making, so more foreign currency on the way.

Will go back again…

Read more from this author at:  http://pallabmukherjee.wordpress.com