How Many Turtle Eggs Fit in a Bra? 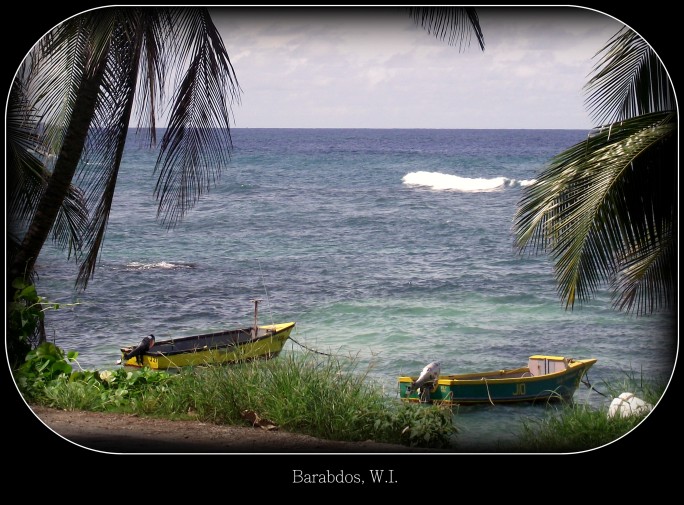 The second largest town in Barbados is in the North-West, Speightstown (pronounced – ‘spike-stong’); a small village town that boasts one of my favorite West Coast beaches, Godings. It was nesting season for the endangered hawksbill turtle and this beach, like many others, is one of their nurseries. At this time of year a company comes from England to check and protect the eggs and hatchlings.

Hatchlings, attracted to light, often head toward hotel grounds that are lit up in the night, rather than the sea. These turtle angels from England patrol the beach at night, guide the hatchlings toward the water, bury eggs should they become exposed and attempt to hide nests from poachers by erasing the mother’s telltale tracks.

I had patrolled some nights with this group. It was fascinating work and I fell in love with the cause. I wish they were there on this day. But I was alone. I was one of a few crazy ones to venture out.

The day after side-lashes from Hurricane Ivan smacked Barbados broad-side; as if a parent reprimanding an unruly child in September 2004, and despite warnings, I headed off, on foot, to “my” beach. The weather had died down, the island was in shambles, water flooded with raging, river force in places. People were standing outside chattel homes assessing the damage, crying, sitting on the ground, elbows on knees, overwhelmed.  It was a two-mile hike to the beach.  I was worried, determined and on a mission.

The paved road in the gully that led to the beach was itself a mere jungle; broken branches, fallen trees, dark, damp. It was a creative process maneuvering through debris, galvanized metal gashed my leg. I could feel the blood but I ignored it. Downed electrical lines had fallen across roads, sparking and hissing like venomous snakes.

I climbed over an old growth mahogany with a girth the size of a small car, under, over and around the predatory wires, shocked to see my destination had disappeared. White and pink coral sand replaced by gravel, limestone, garbage. What was once a wide, peaceful beach, dropped off short into the swollen, muddy sea.

Uprooted palm trees are an easy fix, stand them up and pack the dirt back around them. What couldn’t be fixed, were the exposed turtle eggs and dead hatchlings; a potential feast for those blessed with flight, but not one bird was present, nor another human.

I started to collect the eggs. There were hundreds and nowhere to bury them. I had a handful, some white and some black; which I supposed had rotted.  Startled by movement inside a soft, black shell, the sensation tickled my hand. One was alive, almost to term and ready to hatch. Excited and feeling a sense of urgency I stuffed the soft-shelled, squishy eggs in my pockets, in my bra, trying to keep them warm.  I would move them, but it was impossible to save them all. It was a slow, painful process. I had lost a shoe, my foot injured and bleeding from cuts inflicted by coral and limestone. When I tried to retrieve it the surf defiantly snatched it away. My leg was becoming infected; a little red line was traveling upwards.

I followed the broken and chaotic coast line, in the direction I’d come. I passed Heywood’s Beach, praying the little turtles tucked away inside my clothing would survive the journey, if not all, then at least the one, the only one that ever showed signs of life.

Neighboring Six Men’s Bay, is Port St. Charles; A multi-million dollar Marina and Yacht Club. Surely a facility protected in an event like this. It was, and in a little cove I reburied the eggs. I traveled back and forth, back and forth, for two days and one night. I rented a room in town, rested for an hour. I couldn’t bring myself to leave.

I don’t know how many eggs I re-buried or how many corpses I sent back to the sea , but I said a little prayer for each as I stumbled my first steps toward home. On the third day I could do no more . . . . . . Translucent purple sacs, similar to hurricane damaged turtle eggs, jiggled under my red-veined, brown eyes. My throat, I imagined, was bleeding from the grief that clawed its way out of my tortured heart. The clothes I’d worn when I left, stretched and barely clung to my body, gave me an androgynous appearance. Soiled from sweat, ripe and stank of blood.  I had done all I could, was mentally and physically exhausted, but perhaps, I saved one life.

Eyelids blinked back heavy tears of loss. I fumbled with the gate-latch, stumbled, death-dropped my aching carcass on to a debris riddled patch of grass that once posed as a neatly manicured lawn and groaned so violently, my heart wrenched tightly in protest.  But I suffered less than the hawksbill.

I lay among the rubble for a moment ignoring insects that tried to invade my clothing, inspected my numb skin with inquisitive pincers. My eyelids dropped, I attempted to empty my brain but it continued to think despite my internal orders. Frustrated, I arose, one thread-bare shoe on, the other lost at sea. I felt semi-comatose, despondent.

My house had survived, though a small section of the roof suffered and now rested in the neighbor’s yard, snuggled against a leafless frangipani tree.  The same tree, who nights before had let loose one of its leaves as I stood outside considering the tropical storm. Hurled by a seventy-eight mile an hour wind, the leaf ousted my independence as it nearly impaled my chest, it certainly was no birch leaf twittering on a Canadian breeze; that one leaf had the power to send me back inside, to peer out the window instead.

The interior had deteriorated in my absence. Its new occupants appeared; an army of ants that marched single-file across the tile floor, up the cupboard in the roofless kitchen to lap like little puppies on an open honey jar. New tropical life forms had colonized the pile of dirty dishes in the sink. Green lizards lounged as if they were on vacation, ignoring the screeching green monkey hunkered indignantly in the corner of the dank, moldy smelling, water-logged room; as if he was paying the rent and I had invaded his space. The power was out, still no water, but there was a roof over my bed and it was dry.  The Island was still shut down.  I rested, musing, that sometimes Mother Nature is one crazy and powerful woman; and wondered how one of those fragile eggs, could survive her wrath when the giant mahogany couldn’t.  I think I fell asleep with a smile on my face. One person can make a difference; no matter how small it may seem and even, if it is only one turtle baby at a time.