By: tutelar Posted in: Adventure, Destination 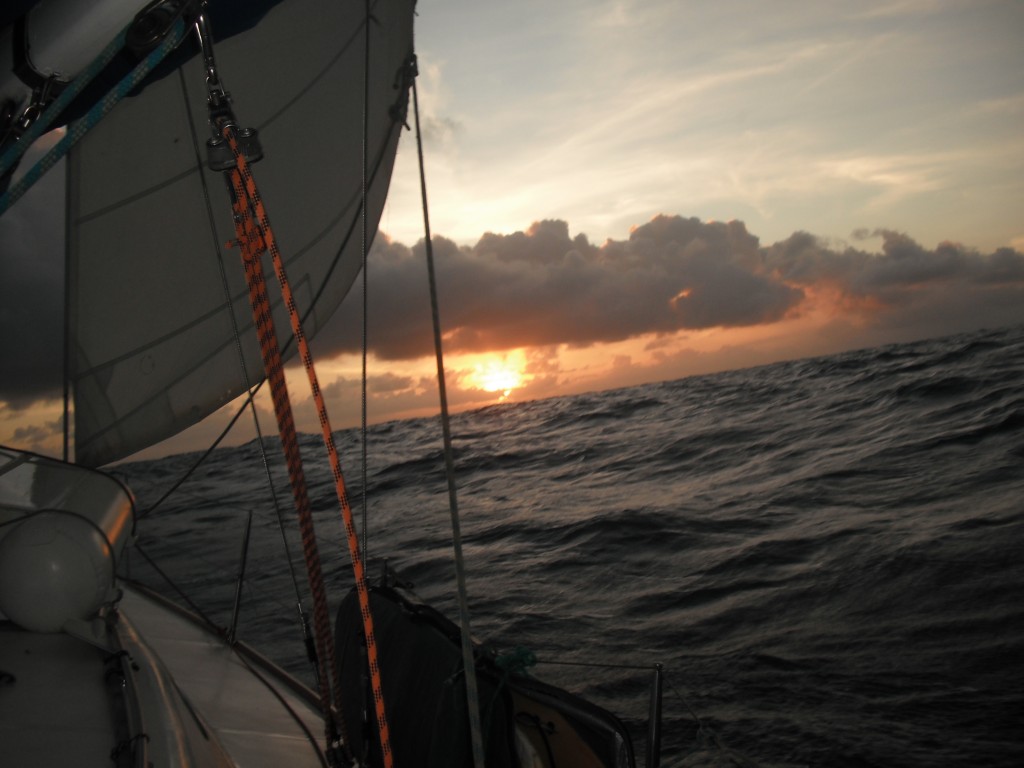 I can’t say I’ve ever dreamt or planned to cross Atlantic ocean. One day life exposed me to the question:

– Would you if you have chance?

So life gracefully threw an opportunity to my feet. And I picked the challenge up.

Here’s the diary of the crossing Cabo Verde – Brazil that took us 15 days.

It was sad to leave Cabo Verde:  almost unexplored, unlived. I felt my being there undone and neglected. But it’s time to go, the journey should continue.

The way between northern and southern groups of islands Cape Verde takes more than a day. We will pass between Bravo and Fogo.

First 24 hours comes to the end, but I still didn’t sleep a minute. Can’t even describe how I feel. And that’s only the first day of crossing.
We sleep in the back cabin. It’s impossible to stay in the front one: from time to time the boat hits the wave and its fore jumps madly.

Sunset diminished in a thick layer of clouds near the horizon. Sea is choppy and uncomfortable, and everything’s shaking. Waves try to invade the cockpit. Everything’s wet, including this notebook and my blanket. Salty drops on my glasses.

We go side-wind. Wind’s a bit stronger than forecast predicted: around 20 knots. We steered in order to save autopilot from excessive stress.
At the beginning of the trip I loved to steer. This way I involved myself in interaction with the boat and sea: watched the yacht response, wind and waves influence. I enjoyed feeling how one gentle move of a steering wheel return the boat on a right course.
I guess steering a boat somehow can get us feeling that we can control nature, make it serve, wherever we go. Dangerous state of mind! Fedor Konyuhov, Russian yatchsman who cruised around the world many times, once said: “When I lost my fear to the ocean, I quit. Otherwise, it would kill me”.
After that he switched on desert safaris, as I remember : )

Night is half starry, half cloudy. I see a moon, it’s dim. But being veiled by clouds, it doesn’t obscure starlight.
Chris is practical, he prefers moony nights: moon acts like a torch that lights the ocean and all its dangers. I’m romantic, I love nights without moon, when stars are brighter.

Orion accompanies me for the whole night. It doesn’t happen in the northern part of the Earth – it appears only near dawn.  He’s my guardian, and even clouds can’t veil the shine of his bright three-star belt.

The legend says that Orion was a glorious hunter. Once together with his hinds he was chasing a deer. They ran through forests, fields and mountains, and no one of them was going to surrender. But Orion didn’t know: that wasn’t an animal he’d been chasing, it was a god under a guise of a graceful deer.  The divine creature jumped to the sky and continued his run among stars. Even then, in rush and ardor, the hunter didn’t stop and reached the sky after his aim.
So Orion is still there, chasing a deer in his infinite run.

In the light of uncertain sunrise we passed the island Fogo. It’s far away, I can see only silhouette of it. I hope one day I will return here: to explore the national park and climb the volcano that gave its name to the island. Now we go to the open ocean.

After midday wind and waving have calmed down. Now it’s hot outside and so is inside the boat. And, finally, not too wet.

Before going to bed in the morning I took a pill from sea-sickness. One of its side affects is desire to sleep. And that was I counted for. And – hooray! – attempt to fall asleep was successful. On watch 2pm-6pm I feel gorgeous. On the place of exhausting desire to sleep comes appetite. To delicious lunch, performed by Crisa, I added cake, some fruits and nuts.

Later I will discover that pills don’t really work in my case. I had been already too exhausted on the second day to stay without sleep longer.  Pills didn’t make any significant difference and I gave up.
I just need to accept the fact that I’ll have little sleep on this crossing, despite opportunity to stay in bed for 12 hours (4/4/4). Just keep going. I don’t care anymore.

No wind. Little wave swings the boat. We reach zone of downdrums – latitudes close to the equator and known for absence of wind. We hope that waves will calm down too. In previous time Chris crossed downdrums, he said, the ocean reminded a swimming pool.

In the ocean even far from a shore there’s life. Birds are hunting fish, virtuously maneauvring in gasps of wind above waves. Bunches, flowerbeds and even fields of brown seaplants drift silently with tide.I’m watching flyfishes, hovering above waters. Huge groups, hundred maybe. They rise in front of the boat, moved by fear of unknown “sea creature”. They fly against the wind too, using a wave as a trampling.

But ocean carries not only life but death too.
At night Chris found a dead calamari on a cockpit: wave ruthlessly threw him from an ocean depth. At day I noticed a big flyfish on our starboard. She was already dead. I waited for Crisa to wake up and throw the fish away – he’s more courageous in “dead fish question”.

At night the moon rises. Here it’s turned upside down. Unlike in Russia, it grows up from bottom to the top. Now it looks like a bowl of ananas juice.

The moon doesn’t stay longer. But when it sets down, stars come on stage. There’re many of them tonight! For 30 minutes, while listening for Portuguese course, I “picked up” shooting stars and made wishes between “Escucha e repete” practice. Facing the sky, backed  by “doghouse” (a tent that protects cockpit from wind), I swung on a bench, murmuring Portuguese words. My beautiful shift time.

Read more from this author at: http://follow-wind.com/