By: theadventuresofadr Posted in: About, Destination, Mexico, Vacation 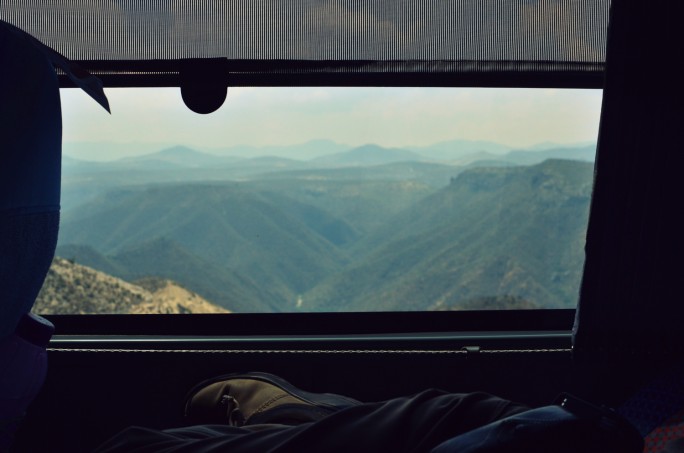 We departed from Puebla in a mad dash to catch a bus and I left another lock behind in the hostel.  I’ve been leaving bits and pieces of belongings here and there as a sort of metaphorical breadcrumb trail so we can find our way back someday (justification).   The bus to Oaxaca brought us through sweeping mountain views and our first healthy dose of highways that cling onto cliffs with the feeling that they were carved out of the rolling Mexican landscape with a giant chisel.  After arriving in Oaxaca we immediately hopped onto a city bus, walked through the bustling zocalo (this almost made us change our plan again), and found the shuttle van depot (literally a hole in the wall with vans).  We had 2 minutes before the bus departed, so we figured fate was telling us to get on. The shuttle from Oaxaca to Puerto Escondido was horrifying to say the least.  There were two traveling options to get to the Pacific coast from Oaxaca by rubber and asphalt.  One was a gentler, longer route that would chew up about 12 hours of life while the other was about half the time straight through several mountain ranges.  You can probably guess the choice we settled on.  It was later confirmed that this stretch of road was the toughest terrain in Mexico to cross.   The journey started out nice as we found ourselves driving through fields dappled with small pueblas towards a poetically yellow setting sun.  That false sense of security immediately disappeared as we started switch-backing up the side of mountains.  The driver seemed to a have a strong proclivity for the gas pedal and a disinclination for brakes and would zip around corners in the other lane cutting turns whenever possible.  Our journey turned into an erratic version of human pinball in the van.  At one point we did not have a straight section of road for almost 2 hours straight.  As night approached I found my eyes glued to the windshield watching the headlights illuminate the edge of the road and the sheer darkness of the void just beyond the white line.  It seemed like our chariot was going to careen into the abyss at every outside turn only to miraculously recover at the last possible moment while we clenched our seat’s arms waiting for the end.  A water bottle dropped out of my bag and it took about 2 minutes to retrieve as it flew across the floor from left to right.  We were the only travelers on the shuttle and didn’t know if this was normal or utter madness.  Our fears were confirmed when the driver had to pull over to let a passenger off to vomit.  The route was dotted with small towns along the way, all offering 24 hour food options and bathrooms.  We stopped in a small town for food and ate fresh tacos in a Mexican family’s living room that was completely open to the street.  The shuttle at this point had become my worst enemy and I wanted nothing to do with it.  For three or so more hours we desperately looked for any signs of flat, gentler landscape ahead.  After 7 hours in this maddening van I damn near kissed the ground upon arrival in Puerto Escondido.  We spent a total of 12 hours on Mexican highways and welcomed the humid, salty air. We spent a night in Puerto and saw the blue Mexican Pacific for the first time in the morning.  By noon we had our packs on our back, and were sweating profusely trudging up hills towards the shuttle location.  A taxi driver heard us talking and stated he was going that way anyway and would give us a great deal to get closer to our little beach haven.  We agreed, and wound up running errands with him and his aunt (his other passenger and reason he was in this town in the first place).  He kept telling us “10 minutes, no problem, we leave soon”.  We waited at the bank, went to a social program office, and got an oil change. Frustrated from an hour and a half of personal personal and the climbing thermometer we were finally heading towards Zipolite.  Palm trees were now dominating the landscape and my mind was reeling thinking about our destination.  A small fishing boat brought us through a lagoon and dropped us off on land where a collective truck was waiting.  We crammed 10 humans and supplies into the back of a pick-up truck and drove down a sandy road for about half an hour until we reached paradise. Imagine sand roads, thatched roof homes, palm trees, and endless empty beaches with animals dominating the sea and land.  There were maybe two or three vehicles in this little village of about 400.  Life here seemed to have been frozen in the past because of it’s isolation.   Shoes were not necessary, or sandals for that matter, and shirts were optional.  We found a cabana we read about in Lonely Planet and for 25 bucks a night. We lived in a dreamy, windowless room on the 2nd floor equipped with 2 beds with mosquito nets, an oversized view of the lagoon, and our very own palm tree that waved it’s fingers at us in the cool ocean breeze.  The sun set straight down the lagoon offering an otherworldly feel as we looked at Pelicans and cranes searching for their next meal in the waters teeming with wildlife.  It felt like this part of the world hadn’t been spoiled by human activity yet.  The lagoon was teeming with birds, fish, and crocodiles and for a decent price you could pay to take a boat out at night to observe the bioluminescent algae. After 3 days we did some math and came to the conclusion that we would go broke if we stayed in our little hut so we shifted gears and decided to camp. After meeting some surfers we wound up renting an extra tent and wound up camping out under a thatched roof at a family restaurant/cabana compound.  The surfer was from Oregon and a disagreement with his parents about school and life in general resulted in him living on his own since he was 15.  He became progressively weirder as the week unfolded but kept us entertained for the most part.  Camping was free granted you ate at their restaurant.  The servings for every meal could easily feed two and were the freshest servings of home-cooked seafood you could ever imagine.  We “survived” on whole fish, lobsters, octopus, fresh fruit, smoothies, and eggs all cooked to order.  The mother running Restaurant Isahmar spoke island Spanish and barked orders all day long in a voice that held generations of hard work and modest living.  Since most of the island lacked running water we bathed using buckets and flushed the ½ toilets (top half missing) with the same tool.  I would like to make an author’s note here and say that as the week progressed I became quite skilled with buckets and developed shower techniques that save both water and time.  We hand washed all our clothes and slept on the sand with the sound of waves lapping every night.  The loudspeaker on the roof of the store next door gave us a healthy dose of Spanish every morning as the boats came in with supplies from the mainland. For the first few days it was just us and a small group of surfers in this slice of heaven.  Days were spent with complete disregard for time paying very close attention to relaxation and letting our minds run out of thoughts until nothing existed.  We thought we had successfully dodged Semana Santa in our beautiful bubble.  By day four we had noticed that a younger college crowd began to arrive like ants marching to melted candy.  They came in groups and all set up tents, which made the solitude of this place a little more interesting at first.  As each day passed by we watched our paradise slowly melt away.  It was like finding an oasis in the desert and watching it dry up before your eyes.   Spring break came in like a tidal wave and by Tuesday and we were in the thick of it.  Tents now inundated every thatched roof restaurant in sight and the beach became infested with bodies and bottles of booze.  We did our best to escape by crossing the channel to the other side where pristine beaches were still barren to try and avoid the reality of the new situation.  Nights were now filled with bad versions of beach rave parties, bon fires with stumbling drunks, grandfathers wearing g-strings, and beach vendors trying to earn a buck selling anything from sardine tacos to full size hammocks.  When Friday came both Elissa and I felt that the age-old adage of “if you can’t beat ‘em, join ‘em” was appropriate.  We determined the only way to feel at peace with the environment here was to drink pina coladas and 40 oz coronas while observing the madness.  This was day three of “party mode” for the crowd and by now they all began looking like mutant versions of their previous selves.  Their young bodies were now covered in bruises, bug bites, and impressive sunburns.  As this thought passed through my mind I realized that the virus that spread through crowd had infected us as well, and we had become one of them too.  On a walk through some thickets Elissa and I had come across some indigenous plant that locals called “the tiger’s hand” and had a poison-ivy like reaction on her legs that also showed up on my knee, stomach, and wrist.  We also had a healthy dosage of sun and been worn out by days of watching waves curl, boogie boarding, and late nights.  We were now worn down images of ourselves, caricatures in our own bodies. But we still managed to have great and memorable experiences amidst this vibe.  One night we went out on a boat to check fishing nets with the one of the family’s nephews during the full moon.  We cut the waters through the lagoon illuminated by the gigantic flashlight in the sky passing the mangrove jungles on either side of the channel.   Hundreds of feet of weighted nets captured about a dozen fish for meals the next day.  That is a memory that I’ll get to hold onto forever. We waited out the rest of the week until Sunday to escape back to the mainland which was welcomed by this point in time.  An hour by boat through the mangroves brought us back to land.   But the vision of the paradise still remains solid in my mind amidst the weirdness that came with jaded traveling surfers and the flood of college kids primed and ready to get wasted on a beach. Read more from this author at: http://theadventuresofadr.wordpress.com/