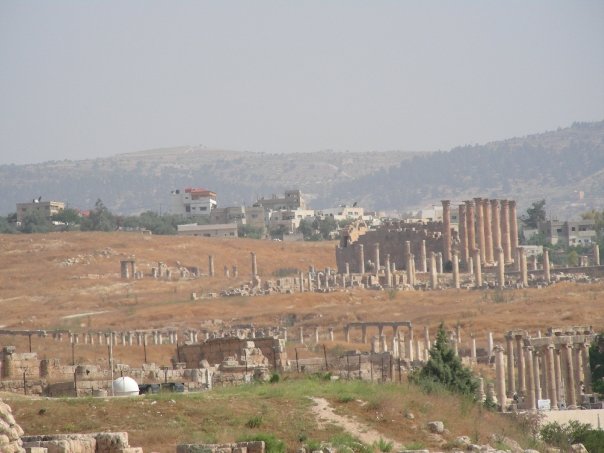 In northern Jordan there is a place where old and new have melded in perfect harmony.  Ruins of antiquity rest beside a thriving city – ancient Gerasa and modern Jerash.

The city of Jerash was the final stop of my trip to Jordan, just before we crossed the border into Israel.  Second only to Petra in terms of tourist interest, the ruins of Gerasa  are some of the most extensive ruins of a Roman city that can be found outside of Italy.  I remember walking up to the entrance, the same entrance used by thousands before me, dating back to the second century A.D. – Hadrian’s Arch – the original gate to Gerasa.  We were on a time crunch with only a few hours to explore the ruins and I felt a sense of urgency to discover it all as I looked out over the city.

Photo courtesy of Wikipedia (because I couldn't find my picture of it).

Passing the hippodrome, we learned that mock “games” are performed daily for the tourists.  I could almost imagine a little Arabian stallion charging around the ring, nostrils flaring, head held high.

Our guide pointed out some short steps down to a little doorway and mentioned something about catacombs.  Oh, the temptation!  Never before have I so desperately longed for a torch.  My inner-adventurer fought my better judgement – and lost.

We wandered across the worn cobblestones of the colonnaded Oval Forum first.  This place seemed to have the heartbeat of the old city pounding within it.

And then we spotted a huge Roman theatre.  I made my way toward the stage in hope of photographing my compatriots looking below from the stone seats when a sound stopped me short.  It couldn’t be, but I knew that sound well!  Bagpipes?  And sure enough two men stood at the front of the stage – one with his lips to a set of bagpipes and the other keeping time with a drum.  Their heads were covered with the traditional keffiyeh and they were clearly Jordanian.  The mix of it all was amazing to me: Arabic men with bagpipes in a Roman theatre.  I wasn’t familiar with the song they played but found myself lingering to hear it, until the ruins started calling to me again.

Then I was off again, stepping lightly and quickly along the colonnaded streets to reach the ruins of the temple of Artemis and another of Zeus, to glimpse the remnants of Roman bath houses.  The hot sun beat down overhead and sweat pooled at my lower back.

Gerasa has been wonderfully preserved, with the newer city of Jerash being built around the old city instead of over top of it so as not to disturb the ruins.  A little bridge connected the two and it really gave a sense of worlds colliding, old and new.

And just like that it was time to go.  We had to double-time it back to our designated meeting place.  Back on the bus and on our way to the Israeli border, I smiled the whole way.  The excitement of exploring Gerasa will remain with me.

Read more from this writer at: Dangerously Daydreaming