Adventure in the Sierra Ancha 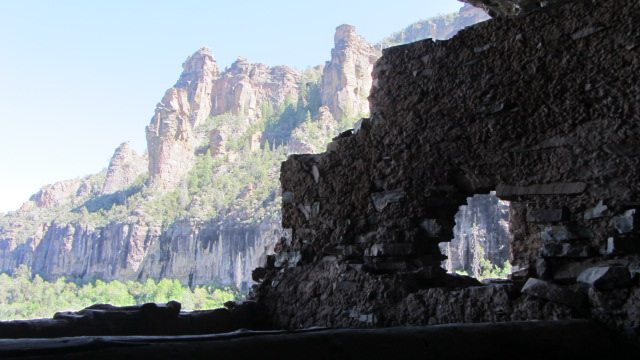 It was a motley crew that set out from our house early Saturday morning.  I had proposed this little expedition after reading an amazing article about the Sierra Ancha in a popular magazine a few months ago, and was really jazzed when a few people actually seemed serious about accompanying us. Aside from my husband Dan and I, our group included our longtime petroglyph-documenting mentor and camping-in-the-outback guru Bill, an amazing man who’s nearing 75 but has the body and stamina of a 20-year old, and John, a fellow rock art buff who has also been accompanying Bill for years on the many petroglyph-documenting camping trips out in Arizona’s Tonto National Forest.

The oddball of the group (in an outdoorsy sense) was Brian, Dan’s best friend from Jersey.  Perhaps inconveniently for him, our trip just happened to fall on the weekend he was to arrive for a week’s stay.  After going back and forth with Dan as to whether Brian would be up for something like this or if we should just reschedule, Dan decided he might as well ask him.  Brian, in his typical non-committal manner, let us know he was up for the trip.  Actually I think his exact words were, ‘Eh – yeah…I’ll go.’

His response didn’t carry a lot of emotion, but this was a brave move on Brian’s part.  He had only ever camped once in his life – a comparatively cushy night in our pop-up camper in a nice campground in Sedona’s Oak Creek Canyon – and after a harrowing night involving a trio of racoons and a picnic table full of glass beer bottles had vowed never to camp again. We set out from Phoenix bright and early, taking the 60 all the way out past the mining town of Miami to Claypool, then heading north on the 188 towards Roosevelt Lake.  It was relatively smooth sailing, including the next leg of the trip which involved a nearly 20-mile joggle on a washboard dirt road.  It didn’t get hairy until we hit the last 3 or 4 miles of the drive.

‘High clearance vehicle required for last approx. 4 miles,’ is how the guide book put it – which was true, especially for the second creek crossing which involved hitting the creek at about a 45 degree angle and praying you didn’t bottom out coming back up the other side.  What the book failed to mention was something more disturbing than the condition of the narrow, gnarly, boulder-strewn final stretch of road:  the approximate 1000 foot drop on the passenger side!  I felt sick as I crawled along at a snail’s pace, only thankful I wasn’t the passenger.  After about 30 harrowing white-knuckle minutes, we finally spotted the little mining road where we would begin our trek up into Pueblo Canyon. It was there, hidden high in the cliffs, that the ancient ‘Anchan Culture’ had lived.  Evolving out of an indigenous Archaic culture as early as AD 800, the Anchan people had started out as farmers living in stone pueblos along the creek banks, but late in the 1200s something changed.

It was then that some of them began to retreat up into these secluded canyons and build nearly inaccessible, and possibly defensive cliff dwellings.  To add to the mystery, these dwellings were only occupied briefly – no more than 100 years – before the Anchan people abandoned the area completely in the early 1300s. After parking the trucks, we headed back on foot to pick up the little mining road where it bisected the dirt road and traversed up the side of a broad hill.  It was a pretty steep grade, and it was hot out.  As always, I took mental stock of our situation and my mind rested on my usual first concern; Dan’s water supply.

For all of his meticulous (ie anal) preparation in every other area, I’m now convinced that Dan will have to actually suffer from full-on dehydration or heat stroke before he truly believes he needs more than 1 quart of water per hike, no matter the distance.  True to form, today he carried two 16-oz plastic water bottles – and a Camelbak with an empty pouch.  I reminded him that we had an at least 6 mile, difficult trek ahead but he didn’t seem too worried.  Ugh.  At that point there was nothing I could do but firmly remind him to please ration his water. We began the hike, which the guide book had cheerfully termed ‘bushwhack out and back’, with Dan and I falling into the rear with Bill, while John and Brian from Jersey forged ahead at a good clip.  The trail quickly narrowed as the mining road faded and finally disappeared beneath our feet, replaced with what looked to be no more than a well-traveled game trail.  We switch-backed up the flank of the hill, practically burrowing through the thick manzanitas in a grueling, steep, nearly 1000-foot climb.

Finally the trail leveled out and opened up and we were able to see the far canyon wall, getting our first tantalizing glimpse of the cliff dwellings, although we weren’t yet a third of the way to our destination. John and Brian quickly disappeared ahead again as Dan, Bill and I took a much-needed breather, enthralled by the view across the canyon and taking advantage of the photo op. First View of the Dwellings

As we hit the trail again, it got narrower still, and began tunneling through thick, low, deciduous-looking trees.  In parts, we weren’t even sure we were still on the trail.  After an exasperating muddy scramble up a 10-foot, nearly 90-degree stretch of trail during which I managed to drop my walking stick, my hat, and my knife in quick succession, we all stopped to catch our breaths and I realized we hadn’t heard nor seen Brian or John for a while.  Now even more unsure as to whether we were on the trail, I yelled for them, to no avail.

Dan recalled seeing what appeared to be another branch of the trail about 10 minutes earlier, and wondered if they had gone that way.  At that moment a hot wave of anxiety washed over me, and I got a sinking feeling in my stomach.  How dumb we were to not stay together!  If they had gone the other way, they could be heading for an entirely different canyon than us, and our only hope would be to head back down to the vehicles, adventure aborted, and hope they eventually turned up.  I  opted to stay with Bill while he rested, and Dan pushed ahead; soon I heard his unmistakeable bird call…’Twee, twee!’  Thank God – he had found them! We all regrouped, vowing not to separate again, and started back along the trail as it opened up into a rocky, cathedral-like stretch that hugged the canyon wall.  Great streaks of minerals streamed down the rock walls, and natural seeps dripped water all around as we continued on.  After passing what appeared to be a small rockslide that had covered part of the trail, I suddenly heard what sounded like a huge maraca rattling and echoing back and forth across the canyon walls.  Everyone jumped backwards about three feet, which was a bit dangerous as the trail was only about three feet wide with a steep drop-off behind us.  Finally John spotted the perpetrator; a large rattlesnake coiled against a rock, huddled, rattling and ready to strike.

They say your true nature comes out in crisis situations and I have to admit this isn’t the first time I’ve felt a twinge of guilt at my incredible sense of self preservation.  I finally got close enough to take a picture (full zoom of course) after being reassured that the snake was not going to unexpectedly fly four feet through the air at me. The trail continued along the canyon wall, passing a solitary ancient one-room structure perched right next to an historic uranium mine (guide book warns not to go in, for obvious reasons!) before reaching the back of the canyon and a beautiful, seasonal waterfall.  This time of the year it was sprinkling healthily, although I’m sure if we would have been a month or so earlier it would have been more of a force to be reckoned with.

Apparently, the ledge below the falls, which you must cross, also gets icy in the winter, but rest easy – if you slip the drop won’t send you ‘plummeting 300 feet’ like the guide book says.  I’d estimate it at a good 50-foot plunge, although it is pretty much sheer rock so I suppose the actual height is irrelevant; you wouldn’t be walking away from that fall.  Just sayin’… The crown jewel of this trek was the reason we came:  magnificent cliff dwellings lie just beyond the waterfall.  Room after room, they lined the cliff ledge in a seemingly endless progression, better-preserved than any I have seen before.  It truly brought me back in time to see the actual posts and beams, stucco still clinging to the walls, and even faded paintings right on the stucco walls.

Interesting factoid:  famous archaeologist Emil W. Haury visited these very cliff dwellings back in the 1930s to collect tree ring samples for his monumental tree ring dating project.  You can see cuts on some of the beams, but I’m not sure these were from Emil – although it made for an interesting thought.  There was almost too much to take in, the pictures in the slide show below will hopefully do the experience some justice.

Upon visiting these amazing and extremely inaccessible structures, it’s hard to imagine what would have caused the Anchan people to choose to live somewhere so difficult and seemingly inconvenient to reach.  Some archaeologists think they moved up there to be closer to reliable sources of water but others believe it was a defensive move in response to a threat by other, possibly invading, Native Americans. After drinking in our fill, we headed back the way we came, eager for the comparable civility and comfort of our camp site.  Most of us were silent on the way back – whether from exhaustion or reflection, I can’t say for sure, but for me it was a little of both.

I was happy we all made it in one piece and got to experience the wonder of the cliff dwellings.  I was thankful that Dan still had one sip of water left by the time we finished, thanks to careful rationing.  I was glad noone got hurt, bitten, or otherwise incapacitated.  I was excited that Brian had gotten to see something so remarkable, and so different from what he was used to in Jersey.

Back at the campsite, while enjoying a celebratory round of Skinnygirl margaritas in plastic camping cups, I eagerly asked him what he thought of the journey and whether the  end made it worth the strenuous hike in.  His response was typical Brian: ‘Eh – it was OK I guess.’