Body Buildings: From Top to Bottom, Castelling is One Extreme Sport

By: moseyburns Posted in: Accomplishments, Spain 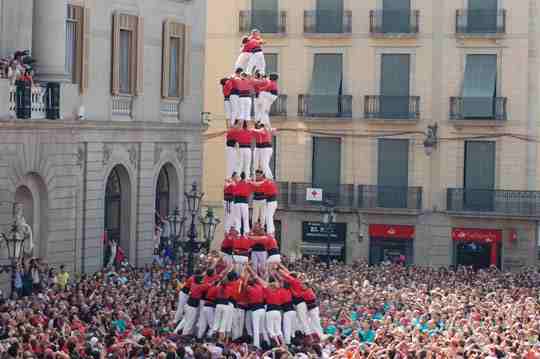 Bodies pressed together, feet search for a hold on the backs of those below, inching upward, layer after layer steadies itself to support the next. Barcelona’s oddest spectacle looks to be the original extreme sport, before snowboards and parachutes became the thrill seeker’s weapons of choice. Visitors to Spain’s second city can witness the feat of human tower building and even lend their bodies to the cause, if they’ve got the courage.

The group is called Castellers de Barcelona, and their passion is castelling. It’s partly a sport but mostly a public performance – some would say a living work of art made from the bodies of the artists – where groups of people support and stand on each other to make human towers that can be up to nine persons high. Castelling is a unique part of Barcelona culture that locals have performed at festivals since the 19th century.

Jacqueline Reid of Montreal, Canada lives and works in Barcelona as an English teacher and is a member of Castellers de Barcelona. The group has been her window into Barcelona culture and its people.

The smallest decisions often bring the most life-changing consequences. Six years ago Jacqueline decided to attend the castelling showcase at Barcelona’s La Merce Festival, the city’s largest annual event, and the castelling equivalent to game seven of the Stanley Cup finals.

She watched the castellers take their places within the structure. First the sturdiest and stoutest form the base, or pinya, of the castell, the structure they hope to build. They link arms, one behind the other, forming a circle, each person supporting the one in front of him, like the buttress of a wall. The smaller members, usually children, then climb on top of the pinya, forming level after level until a small child stands on the top, completing the formation. Several clubs compete in the showcase and the highest, most ambitious castell wins the prize.

By coincidence some of the castellers Jacqueline saw perform at the festival jumped on the same metro as her still wearing their team uniforms: red shirts, white pants, and black sashes, or faixa, around the waist. By speaking with them she learned that anyone can become a member of their club. Most of them had no previous experience with acrobatics, and the club has members from other regions of Spain, Germany, France, and the United States. `

A castelling practice in Barcelona

There are no age limits either; small children as young as six form the highest levels of the castell, and a 70-year-old woman watches the members’ bags while they perform, a wise precaution in a city known for theft and pickpocketing. The club members call her Yaya Bossas, “Grandmother of the Bags.”

A great casteller does need to have some defining traits, however, and their motto is “Força, equilibri, valor i seny”, which in English means “strength, balance, courage, and reason.” Strength is needed to hold those above you, balance to keep yourself steady, courage to risk a fall, and reason to avoid it.

Jacqueline began training with the club, learning the role of each position on the team and how each person supports and becomes part of the formation. She soon learned the importance of courage and reason when during one of her first performances the castell collapsed on top of her, giving her a painful neck injury.

“I was helping another team and I was not experienced enough to be as close to the centre of the pinya as I ended up,” she says. “The team was trying an overly ambitious castell since it was the last show of their season. I was the only one hurt in the fall. Usually there are no injuries from falls, certainly fewer than from other sports.”

The accident didn’t change Jacqueline’s mind about becoming a casteller, and six years later she is a popular member of the club. She recently had a baby boy and introduced her new son to the club members when I visited a practice. Castellers de Barcelona is as much a social group as a sporting club, and Jacqueline says it has been a great way to make friends among the locals and master the Catalan language spoken in Barcelona.

One of the people who met Jacqueline’s new son George that day was Josep Sitya, who joined the club eight years ago when his two daughters became members. He’s one of about 200 active members; there are about 1200 members in total

The club is also a social centre. Here friends and family relax as they watch the practice

“It’s one of the most important parts of [Catalonian] culture,” he says. “It’s a thrill to see something that you’ve work so hard to create, even if it only lasts a short time.”

Castellers de Barcelona is now preparing for another season of dramatic human tower building, ignoring the laws of physics as they lift their creation higher and higher into the sky. When the club began in 1969 they could manage a four-person-high castell; now they can comfortably build a structure nine persons high, and are always working to beat the record.

“It’s very rewarding when the team works hard all season and achieves our goals,” Jacqueline says about castelling. “It’s a great chance to be involved in something that is pure cooperation and excitement.”

Read more from this author at: http://moseyburns.wordpress.com/