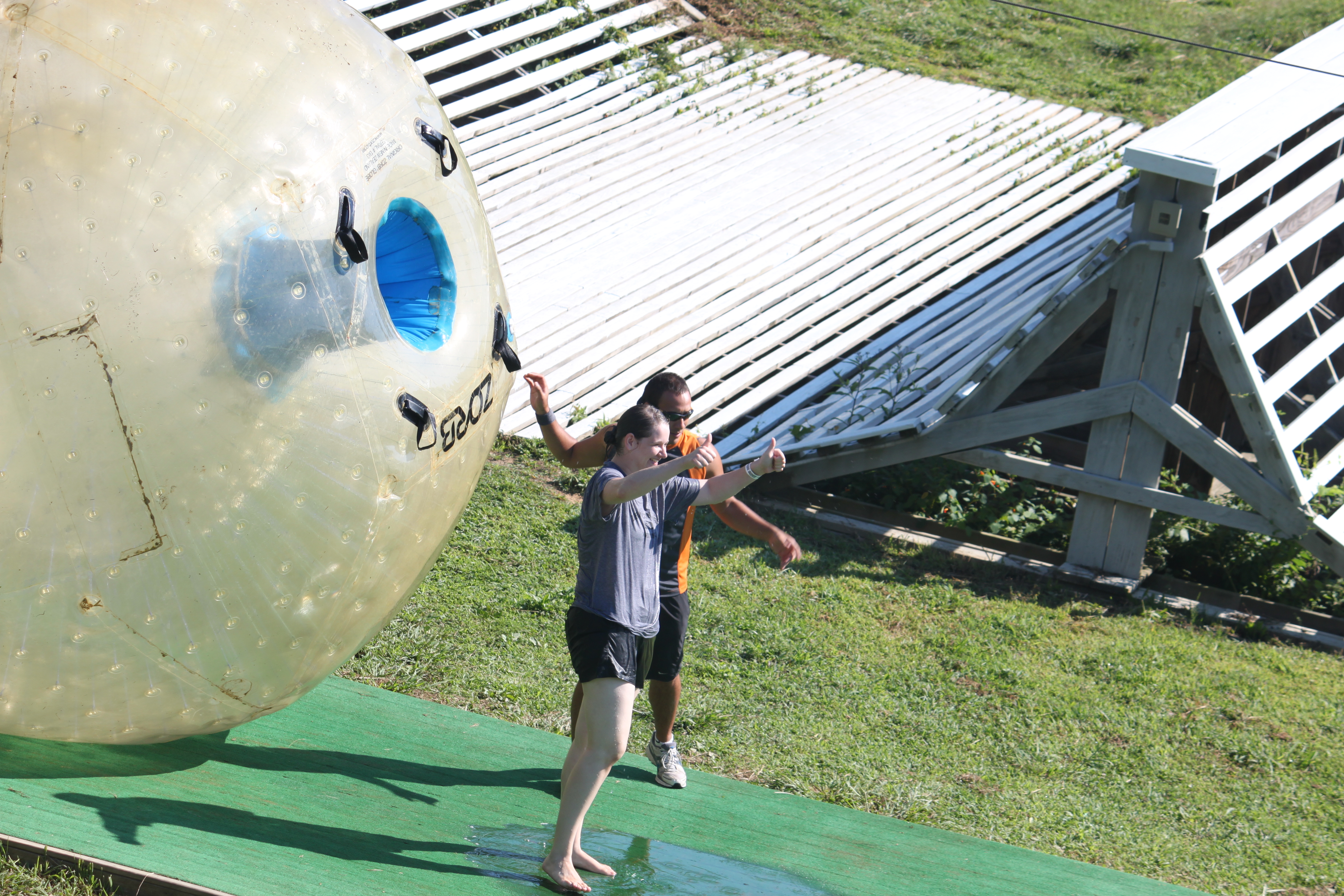 There is no rhyme or reason to how these ideas get in my head. I am not an adrenaline-junkie or a thrill-seeker. I am a thirty-year-old, mother-of-one, whose idea of a good time is a book on the couch with a mug of hot chocolate. In cozy sweatpants and big socks. Get the picture?

A pre-roll picture with my daughter – the globes are resting at the top of the hill in the background.

But every once in a while I end up skydiving or whitewater rafting or, in this case, globe riding. It was purely coincidence that our summer vacation spot also happened to be the location for the only Zorb site in the United States. Once that coincidence was discovered, I had to take the opportunity. It’ll probably be a while before I’ll make it to New Zealand, home of the sport, so this was my chance.

I was the third person to arrive at Zorb Smoky Mountains in Pigeon Forge, TN on a sunny Tuesday. Nestled well behind the glitz and stink of the main road, the small barn-like office building only partially hid four globes at the top of a grassy hill. I had two options: dry ball (harness required, compared to astronaut training) or wet ball (no harness and a bit of water inside the ball with me). When I chose the water-ride I had two more decisions: straight track or zig-zag. I had arrived with the idea of doing the straight track – seemed faster and less likely to cause accidental water inhalation – but after chatting with an experienced “zorbonaut” I opted for the zig-zag. Why not? I was only rolling once and this was the most dramatic experience I could have so I paid and boarded the bus.

There were three total zorbonaut-wannabes in the bus to the top for the first rolls of the morning – one couple and myself. The couple had opted to do the dry ride first so I chatted with the woman while the man got strapped in. As the minutes ticked by she stared at the inner-sphere of the large globes and started to get worked up about the small space inside. “I’m starting to feel claustrophobic,” she admitted over and over. Great. I hadn’t even considered that. I was freaking myself out about drowning in a puddle of water. Also, what were the odds that one of my knees would smack into my mouth and knock out some teeth? By the time my turn rolled around (pun definitely intended) I was convinced I would be either dead or toothless by the end.

Someone pushed the ball  out of the gate, and I swear that ball got off the ground as it went down the track (though my husband took pictures to prove otherwise). In between furious blinks to keep water out, I was trying to sneak a peek at where exactly the ball was headed. There were several wooden fences posted along the top of the embankments, and I was certain that I was about to go airborne over one of them and into the neighboring lot of trees. Meanwhile, the tilt-a-whirl effect was looping my brain into thinking I was careening down the hill at racecar speeds.

Who came up with this idea? (New Zealand, in case you missed it earlier)

Because it’s awesome. At the bottom, they opened the valve of the ball to let me out. The pictures look a bit like the birth of a mutant with water spilling forth before sopping toes emerge, but those are definitely my pasty white legs and my exuberant thumbs up.

The Zorb photographer wanted me to do a “crazy jump” on the count of three, but I was a wee bit too wobbly to be attempting such shenanigans. I was alive with all my teeth and wasn’t particularly interested in sustaining an injury in a post-roll jubilant jump.

At the top of my list of dumb things that I’ve done in my life are: getting back in the raft after being dumped in Class 4 rapids (got dumped a second time for that choice) and getting up at 4:30 AM for a month for intensive athletic training across the street from a pastry shop (didn’t lose any weight or inches on that one). Globe riding at Zorb Smoky Mountains was definitely not one of the dumb ones. It’s near the top of my list of great experiences.

Read more from this author at: http://frifflethoughts.wordpress.com/