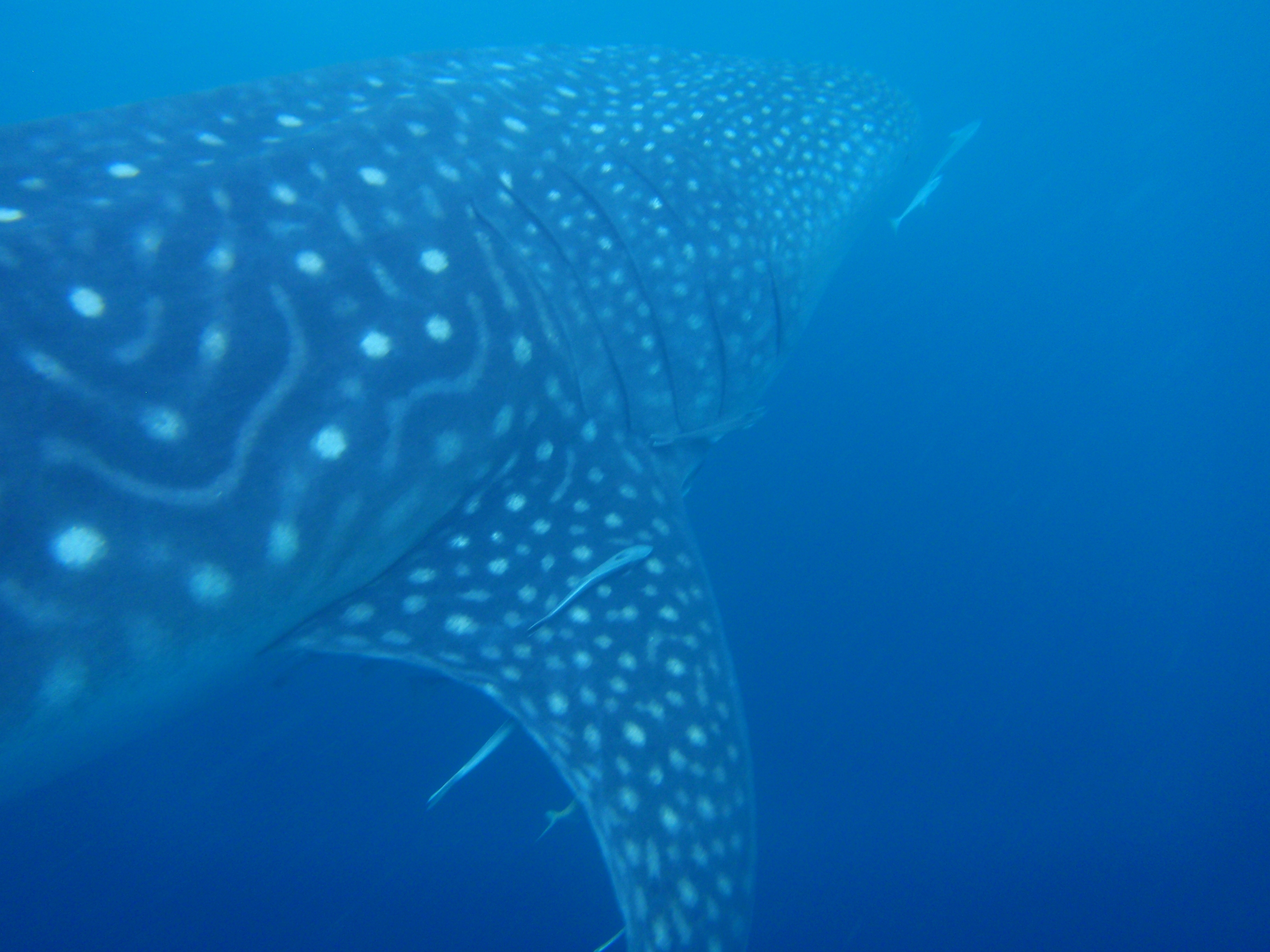 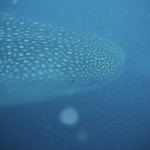 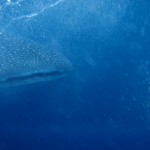 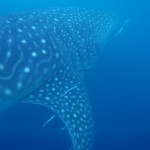 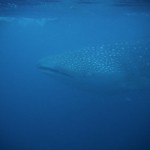 Heavy grey clouds filled the sky when we arrived in Exmouth and it was not long after we had parked our backpacker van at one of caravan parks that the big, juicy rain drops began to fall. The weather was not looking good for our plans to swim with the whale sharks the next day.

Ningaloo Reef is one of the few international destinations where the elusive whale sharks return each year around the same time. These behemoth sharks appear more like whales as they are filter feeders and don’t have the sharp pointy teeth commonly associated with sharks. Every year they return to Ningaloo to feed on the plankton that occurs in conjunction with the coral spawning. The whale sharks range in size, the average being 9 meters long with a mouth around 1 meter wide.

For as large as they are, the ocean is so many thousands of times larger that the best way to find them is using a spotter plane, with only a boat you would have to follow the currents and hope for some good luck. Despite the bad weather and cloudy sky – good indicators that the spotter planes wouldn’t be out – we thought we’d ask around to see if any companies had a confirmed trip for the next day. It was an all around “No”.

After two days of waiting, we finally heard from one company that they had a confirmed trip for the next morning and we eagerly signed up. We awoke to a sky still full of clouds, but the trip went ahead. We and thirteen others headed out on zodiacs to the awaiting boat. However, the staff had forgotten to warn us that we were to be joined by a film crew from Discovery Channel Australia who were making a travel documentary around Australia. After watching the presenters cruise in on zodiacs for the fourth time, we were all eager to go and the zodiac driver finally told them enough was enough if they didn’t have the shot, too bad.

Once we were all onboard, the captain headed off for the deep blue. Unfortunately, the spotter plane was not able to fly since there were still too many clouds, so the majority of our morning was spent just cruising around following currents and checking out popular sighting spots in the hopes of finding a whale shark.

About an hour into the trip the clouds began to disappear and the captain received the good news that the spotter plane had left the coop. Lucky for us, the company that we went with did not share the plane with other boats, which meant that when the pilot spotted a whale shark, we had first access to it and therefore more time to swim with it. It wasn’t too long before we received more good news, a whale shark had been spotted. The captain sped off in the direction of the GPS coordinates. As we raced towards the whale shark, the staff briefed us on the rules of engagement.

Avoid swimming near the tail (getting hit can be lethal)

Divide into groups, half on one side, half on the other (no kicking or leg pulling to try to get ahead)

When you hear the whistle, stop where you are (don’t chase after the whale shark)

We cleaned our masks, put on our fins, listened to the guide repeat the rules, and then prepared to jump in.  I was, thankfully, not with the film crew. Since I suppose they must have paid more, and one of the presenters was more than slightly seasick, their group jumped in first. After their designated amount of time, the first group stopped swimming and my group jumped in. We waited for the whale shark to approach.

Above water we watched as the dorsal fin slide along like a sailboat on the water. It was heading straight for us! We quickly divided in half and started to swim along as it rapidly approached. I went to the left so that I could photograph the spots just above the left pectoral fin. The spots in this region are like the “bodyprint” of the whale shark and the organization ECOCEAN (http://www.whaleshark.org/photographing.jsp) has a photo-identification library to keep track of and identify different whale sharks. This whale shark was over seven meters long and looked as though it was barely making any effort as it swam past us, swishing its tail back and forth like a cow swatting at a fly. We struggled to keep up as it cruised along.

After two exhausting swims with the first whale shark, we had a break and a buffet lunch before the call came in. Another, slightly slower moving whale shark had been spotted. Once again we were off. The captain moved ahead of the whale shark to give us time to jump in and wait for it to approach. This time my group went first. We jumped in. We looked around. We waited. Nothing. Just as we were about to swim back to the boat, the whale shark was upon us. A giant mouth arose from the depths and once again, we were directly in its path!

This time, I was incredibly fortunate. In the mad rush to move out of the whale shark’s path, everyone mistakenly went to the other side except for my partner and I. We were alone on the left side of the whale shark. No swim fins, no flapping arms and legs or streams of bubbles to block our view. I took a short video as I swam alongside it. I longed to touch the spots on its back and to feel the scales of its skin. I wished I could take a similar photo to the one that I had seen so many years ago in National Geographic Magazine. But then, I remembered the rules. I watched as the tail swished dangerously back and forth. And I kept my distance. Maybe not three meters, but far enough away that I was not in danger of being swatted like a fly. When the whistle blew, I watched as the magnificent creature swam away, seemingly unperturbed by the crowd of humans that had attempted to share its space in the ocean and ride in its wake for a brief moment of time.

In addition to the two whale sharks that we swam with, we saw humpback whales, a pilot whale, dolphins, a hammerhead shark and a manta ray. It was an absolutely incredible and completely unforgettable day.

To read more about my overseas adventures, please visit my wordpress blog, Neshamayin.