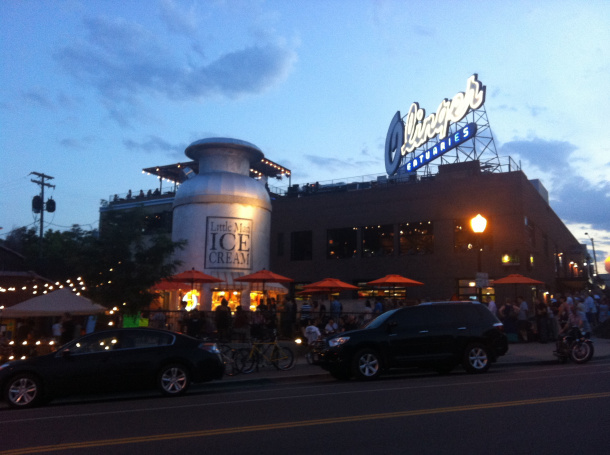 A visit to the Denver restaurant Linger is like entering into The Sims game portal, where anything is possible. The concept of the restaurant is illogical—Linger is at once a refurbished mortuary and an eatuary, that serves multi-cultural street food, in a fine dining setting. And the patrons, like virtual Sims characters, follow unquestioningly along this design.

That’s because Linger owner and chef Justin Cucci—like the Sims player who oftentimes develops a virtual mansion in likeness of his dreams—strategically designed Linger with his restaurant reverie in mind.

Sunset at Linger. Little Man Ice Cream shop, a separate establishment, sits out front and awaits for Linger customers looking for an after-dinner desert. Cucci describes the relationship between the two separate eateries as one of an almost symbiosis. “A lot of people at Linger go through the lines for ice cream, which at one, yes, I lose desert business,” he says “but the flip side is, when everyone is in line for ice cream, just about everybody cant help but look up and look at our patio and our dining room. I see a million people just pointing up. So I think it works two ways where we bring them new business and they bring us new business.”

“I wanted a restaurant that I wanted to go to more than anything, that wasn’t already represented in Denver,” Cucci says. “I like quick and easy foods that don’t oftentimes have the circumstances of fine dining.”

In 2010 Cucci opened the doors of a building once owned by Olinger Mortuary—this time, to serve the living—and assigned street food as the menu’s general theme.

“They were all pretty, I would almost say, irresponsible choices because it was a big space, it cost a lot of money and street food as a restaurant concept is definitely unproven, especially in a market like Denver,” Cucci says.

I visited Linger for the first time a few weeks ago with a friend. The dark-eyed hostess with a silver ring connecting her right nostril with her left motioned us towards her with a shutter of her eyes.

“We’re looking at two hours for the dining room, but if you wait right here, I can get you a table on the patio,” she said. A subtle, black and white photograph of a woman in a coffin hung on the wall beside the hostess stand. Five minutes waiting and another flutter of the eyes, to signal we were in. And not just in, we were accepted.

Cucci describes Linger as a nod to the building’s history. “In terms of the building, it was a matter of bringing some of the mortuary elements into the restaurant without beating people over the heads with it.”

A jazz band playing at Little Man Ice Cream can be heard from Linger’s rooftop patio.

My friend and I climbed two flights of stairs and met another hostess on the roof deck polishing silverware. She directed us to the patio tables. We turned right at a green RV, which opened to a flat of servers dressed in hipster Linger t-shirts, with thick eyeglasses; male patrons dressed in semi-formal attire and, most of them, with neckties; women in Spice Girl wedge sandals, with their legs crossed, as long as skyscrapers. They were sipping lemon spritzers with cucumbers and bubbles, lounging and conversing, lingering, beautifully dressed.

“I feel way too under dressed, like I’m a teenager. You should have warned me!” My flip-flop wearing friend said to me as we stood beneath the taller patrons, still waiting for our table.

The crowd of young professionals held picnic table beer cups, and plastic wine cups, sharing portions of popcorn, miniature burgers and small plates with surprising combinations like fried chicken and maple syrup. The jazzy band played at the ice cream shop below us. A shivering saxophone lingered throughout the ceiling-less scope of the Denver skyline and slow-motion sunset. A Rastafarian “Colorado Love” sign dripped red and yellow paint down a nearby chimney. We sat four stories high in what felt to me like that secret play den I always wanted—something a child would make up—with members-access-only.

“Why are you asking me about work right now? Can’t we just take a moment to enjoy the scenery,” my friend warned me, when I asked how her day at work was. Apparently the members-access-only implied that, during dinner, we would not mention our 9-5 jobs. I could tell the other patrons, looking over the Denver skyline, would agree with my friend.

We were seated at a table by the edge of the flat. Our server greeted us and placed an embalming-glass (filled with drinking water) in front of us. When I asked her what she thought of Cucci, my server said, “Oh Justin’s great, he’s always around. He has his hands in everything.”

As owner and head chef, Cucci plays a central role in both the business aspect, and the creative aspect of the Linger establishment.

“I was plugged into restaurant life, including chefs and servers and the whole system, from the earliest I can remember,” Cucci says of his born-into love for hospitality. Growing up, his parents owned The Waverly Inn in New York City “It just became part of my DNA.”