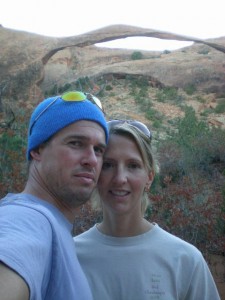 As many people must travel far distances to find work in this economy, they might understand why I flew down from Bend, Oregon to Tyler, Texas to help my husband, Paul, drive his truck and tools back home. He spent two months there, building. We took advantage of this necessity by having a little mini-vacation, staying in Bed & Breakfasts and enjoying a rare week without the busy activities of our four daughters.

One of our stops was in Salt Lake City, mostly unremarkable because we stopped on a Sunday. Salt Lake City citizens must keep the Sabbath for there was an eerie ghost-town feel of its empty streets, flanked by imposing Zion banks, and closed shops. We traveled in October. The billboards were of two types: haunted houses and, just as scary, breast enlargements.

We visited the Mormon temple, of course, but we wanted more – mainly food and beer. Luckily, we found a brazen establishment that should not be overlooked: The Beer Hive Pub, just down the street from the Temple. Touting their Polygamy Porter and Captain Bastard’s Stout and pulling from an authentic German menu from the Vienna Bistro next door, Paul and I had a divine luncheon seated at the prohibition-style bar. Inlaid in the bar was a strip of ice where Paul and I kept our hearty pints cool. Eating in-house sausages and saurkraut was the perfect completion to our time in Utah.

That morning, we had breakfasted in Moab. The previous day we had rolled into Moab early evening and, short on time, chose a 3 1/2 mile loop through the Arches National Monument to view some of the most famous arches.

Of course, following Paul means pushing the envelope. We had carefully traversed a variety of precarious boulders following a series of cairns to the hot spots of the park.

With the quest of “just one more,” night fell before we had returned to our car and we had to slowly make our way home searching for the cairns by the light of our cell phones, often on the tops of rounded boulders with drops on this or that side.

When we reached the wagon-wheel of main trails, we wound our way through slabs of sandstone rounded by the weather so that in the darkness they looked like enormous beehives — or ancient Old World tombs.

Yet, Paul’s failing to plan ahead, a trait which invokes many exasperated sighs from myself, is the very thing that causes these adventures. If it turns out bad, we might get hurt or, in a few extreme cases, win the Darwin award. If it turns out okay, we’ve experienced something worth telling. So far, all things have turned out okay. I usually get a minor hurt — I’m the clumsy one, probably because I’m scared — falling on the lava rock near the glacier on Broken Top and cutting myself (because we had to blaze our own trail instead of using the perfectly good one on the other side), stepping in the pit and spraining my ankle (because we had to run the trail instead of walking it), falling from the tree and having my pride incensed (because we had to climb it because it was there). Paul pays for these dearly as I berate him for not thinking about this or that before we get in the middle of these messes. But, in the end, you’ve got to hand it to him, when we’re all done and look back — we’ve had an adventure. We’ve lived.

From the summit of Broken-Top, with bloodied knee, I skiid down the backside of the mountain in my tennis shoes. When I sprained my ankle — a mile from any road– Paul carried me up out of the river-bottom and I hopped to give him rests. When I fell from the tree, Paul laughed ’til he almost fell from the tree himself, pointing his finger at me and gloating. Though painful, humiliating, or scary, these are moments I can still feel and touch and smell and remember — memories that fuel a gratefulness in my heart for having done it.

I’ve climbed to the top of city buildings with him. I’ve scrambled over slippery rocks with the rushing of a river around me. I’ve rock-climbed when he’s forgotten to fasten my harness right. Somehow, with Paul, there’s always an element of danger.

After receiving a ticket for running a stop sign, I learned in traffic school that even since seatbelts have become widely used and cars made safer, accidents have increased. There is a level of safety that remains out of reach. Some theorize that humans innately seek a certain amount of risk.
I find that to be true.

Somewhere deep within us is something that prompts us to risk, to see the possibilities of win or fail, to feel the weight of life or death, to press the limits of achievement. It makes us feel alive. Paul’s just a little more astute at following it. As for me, I’ll keep following him, sometimes in the dark, sometimes in the cold, sometimes up the backside of mountains. The road’s interesting. It clearly feeds something deep within him and it gives me something to write about.