Roughing it in the Wilderness 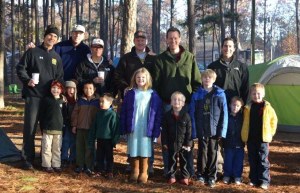 With the latest outing of the Dads’ Bucket List (7 dads, 9 kids), we decided to take it to another level by putting our survival skills to the test with a night out in the wild.  No couch to lay on.  No TVs to watch.  Just man vs. nature.  We would be far, far away from any civilization so as to really put our skills through the paces and demonstrate to our kids that we had what it took to take on everything that Mother Nature could throw at us and come out alive on the other side.  That’s right, we doubled down with the high risk adventure of camping at Stone Mountain Park – a 15 minute drive from home.

The stress in pulling this one off started about ten days before we even pulled up to the campsite.  You see, we men often try to act like our wives are the ones with the Type A personalities that have to have everything mapped out and planned down to the minute.  But we (or at least some of us) are just as guilty.  Enter exhibit A with Kevin Watts who hit me up in like late October for a comprehensive supply list (although he very stealthily claimed it was a request from his buddy Pete Do).  Dude wanted “coverage” on food, shelter, fire, latrines, entertainment, laundry facilities, parking, disaster scenario plans and even munitions.  Regarding the last item, he claims he “heard from a trusted source” that an attack by Jamaica on our sovereign nation was imminent and I guess he figured that the crazy Rastas would go after the Stone Mountain campers first.  So I spent two sleepless nights putting together a supply list that initially looked more like something for a move overseas than a trip overnight.  What we ended up with was a list that contained lots of chips, dips, burgers, juice boxes and most importantly BEER!  With these essentials I figured we could overcome any hardships – or marauding Jamaicans. Tough to beat the Fall colors

We arrived a little after lunchtime and the weather was perfect with temps in the low 70s and not a cloud in the sky.  While the dads started to set up camp the little guys immediately got into superhero mode with an epic battle between good and evil.  I had no idea the Legion of Doom had an outpost in a state park just outside Atlanta.  No fear because Batman, Green Lantern and a bunch of the Avengers stayed busy facing down the threat.  Once most of the camp was set up, a couple dads (I believe Kevin and Pete, but neither will own it) started to work on the fire because when it’s 3pm and mid-70s what you need, of course, is a fire.  The problem was they appeared to be more focused on sending smoke signals than creating fire (best I could figure the first message was something like “Hey honey, we made it to camp and it’s going well except for all this smoke.”).  I suggested a simple text might be a better mode of communication from here on out.  George Markley decided to take over the reins as God of fire and got us a nice little flame going.

Base camp around a roaring fire

Superheroes morphed into a game of Cops ‘n Robbers, which allowed the dads to play our own game of “Spot the neighboring campsite flashing us the nastiest stare because our loud band of miscreants are going unchecked while we stand around drinking beers and talking college football”.  We got the hint and migrated most of the troops down to the lake for some fishing, or as one dad called it “baiting a hook with no hope of getting a bite”.  From there it was off to play a little sand volleyball followed by some paddleboating before dinner.

The dinner menu was nothing short of gourmet.  We started with an appetizer of Pâté on toasted grains (a.k.a. chips and dip), followed by an entrée of beef Wellington and suckling pig (hamburgers and hot dogs) and then dessert of fondue au chocolat sur les biscuits (s’mores).  Dinner led to everybody hanging around the campfire, which sparked some solid ghost stories then to some not so solid guitar playing and inevitably to bedtime for the kiddies.  My youngest son, Bo, wanted his buddy Thomas to sleep in his tent so we obliged knowing we could move him to his own tent later.  Although brother Blake had no problem falling asleep, we could hear Bo and Thomas having a harder time. Even Avengers have to sleep

The next day when I asked Bo what he and Thomas were talking about at bedtime he responded with “Thomas kept telling me ‘Bo, be quiet and go to sleep’.” (Welcome to my world, Thomas).  Once the kids were down, we sat around the campfire and had quite a few laughs before calling it a night ourselves.  At dawn, Mike McIntosh took the lead with breakfast by whipping up some pancakes and bacon while Pete Do made us some warm cups of Vietnamese coffee (for the record, I’m sold).  After breakfast the kids made sure all the other campsites were up by starting another game of Cops ‘n Robbers.  A little more fishing was on the docket before we packed up and headed back to civilization with all members of our party accounted for.

So when we polled everybody about how this experience ranked, we got thumbs up all around.  After reflecting on all the fun we had, I was thinking about if there was a moment that stood out for me.  If I had to pick one, it was probably something that happened in the middle of the night.  I woke up at about 2am to the noise of one of our little campers crying.  It wasn’t a loud tantrum type cry, but one of those low, soft sobs where a parent can tell that a child is really upset.  I called out to Phil McWard and asked if everything was okay and he responded, with a calm “yeah, we’re okay now.”  The cries went away and I fell back asleep.  In the morning, I asked Phil what happened and he said that he had taken his daughter, Anna, to the bathroom and his son, Jack, got scared when it took too long for them to get back.  I thought about it a fair bit throughout the day because for some reason it really resonated with me.  I see our little guys getting more independent with every passing year, but as yet they haven’t gotten to that point where the novelty of dad has worn off and they don’t want us around.  For now they still want to do things with us and for us to be central figures in their lives.  For me, that moment of Phil calmly reassuring Jack that everything was okay was just another example of how they want us in their lives.  How they need us in their lives.  And how we need them.