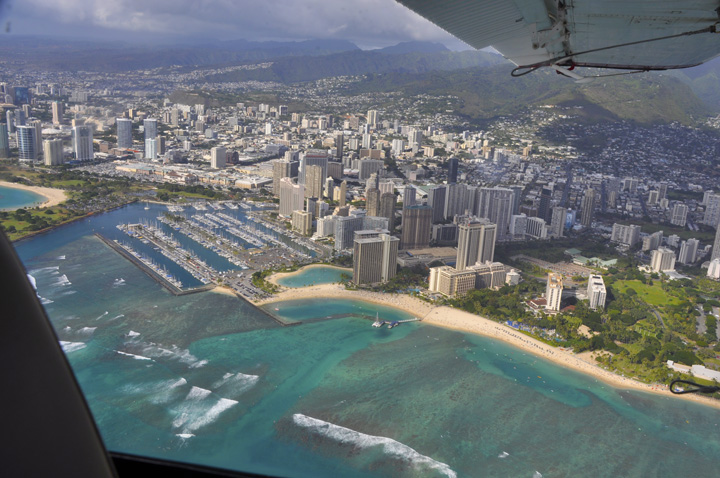 Jack and Jill had been a couple for almost seventeen years and had shared many wonderful times—travels to exotic places, sunset walks on the beach, cooking meals and watching football games together, long talks, and even—when Jill could persuade Jack, which was rare—going dancing.

They’d also tackled their share of difficulties, but no matter the circumstances, they’d always been there for each other—as confidante, coach, cheerleader, Florence Nightingale, and general support system.

So in the fall of 2012, Jack planned a surprise for Jill. She plagued him with questions, trying to trick him into revealing even miniscule hints about this surprise, but he was resolute (and, if truth be told, enjoying the game). The only clues he would divulge, which weren’t really clues at all, were that she should take two cameras and that the setting would be outdoors.

At 2:15pm on December 22, they set out, driving west. Just before they reached the Honolulu airport, Jack turned down a road that led to an industrial area by the ocean. This was quite puzzling because Jill knew the area. It was mainly used for airfreight services such as FedEx and UPS. As they passed FedEx on the right, Jack turned into a driveway on the left that Jill had never noticed before. And there it was, adjacent to the ocean—a little office, hidden by a hedge, bearing the sign, Island Seaplane Service.

Now she knew—they were going for a ride on a seaplane. Jill had flown on small planes before but never a seaplane. A new adventure. She was delighted.

Inside the office, Jack checked in, then disappeared for a few minutes. He came back carrying a cardboard box, and Jill could see a bouquet of yellow roses—her favorite—peeking out of the top. How sweet, she thought.

Jill was so surprised and overwhelmed by all this, she barely noticed the three TSA security guards until she was told, “You can’t take your camera bag on the flight.” And there were more rules—cameras were allowed but the straps were not and had to come off. While Jill attended to this task, Jack engaged in a serious, hushed discussion with the three security guards who refused to let him take the box containing the flowers on board.

As it turned out, President Obama was in town (Jill didn’t know because she’d been too busy to watch the news in recent days). That’s why the guards were there. That’s why the heightened security. But roses—a security threat? The guards did eventually relent, and after checking the contents of pockets, plus a thorough pat down and wanding (the zipper on Jill’s cargo pants caused a “beep” and had to be investigated), Jack and Jill were allowed onto the floating dock next to which the seaplane awaited, its pontoons bobbing on the water.

The guards followed them, watching for suspicious activity, Jill suspected. One guard offered to take a photo of them together in front of the plane. Then they climbed aboard, Jack in the back seat with his box and one camera, Jill in the fold-out seat in front of Jack so she could have the flexibility to take photos from either side (Jack’s idea because he was accustomed to Jill’s obsession with photography).

After fastening seat belts, they all donned headsets so that Jack and Jill could hear the pilot talking to them during the tour. It would take about five minutes, he told them, to taxi out to the take-off spot.

And that’s when Jack made his move. Out of the box he took an exquisite lei—a garland of perfumed tuberose interlaced with golden royal ilima flowers—and placed it around Jill’s neck. Then, before Jill knew what was happening, he handed her a letter. It read, in part, “I cannot imagine being without you. I would like to share the rest of my life with you. Jill, will you marry me.”

The headphones made it impossible for Jack and Jill to talk to each other, but she turned around and took his hand, squeezing it and nodding vigorously. But Jack wasn’t done. He reached into the box again and pulled out a necklace—a double strand of deep-green jade stones—and fastened it around her neck. She wanted to throw her arms around him and kiss him almost more than she could bear, but again she squeezed his hand and held on tight while the little plane lifted off effortlessly into the Hawaiian sky.

Honolulu, the Ala Wai small-boat harbor, and the beginning of Waikiki

At first they flew east, the high-rise office buildings of the city glistening below them in the afternoon sun, the deep blue of Honolulu Harbor, the green-roofed Aloha Tower Marketplace sitting aside its namesake ten-story clock tower—once the tallest building in the state and still a beacon welcoming ships into the harbor.

Honolulu Harbor and downtown, with the Ko’olau mountain range in the background

Then came Waikiki. From this vantage point, how azure and enticing the ocean looked as it flowed over coral reefs and onto the most famous strip of beach in the world.

Earlier, the pilot had told them they would circumnavigate Diamond Head for a good view of the storied peak, even though it meant veering slightly off the approved course. But at his attempt, the radio crackled and a voice said, “Are you familiar with the blue line?” meaning, ‘get back on course!’ Air-traffic officials were allowing no deviation today, so the pilot turned around and headed back the way they had come.

National Memorial Cemetery of the Pacific at Punchbowl crater

Still, there was more to see. Punchbowl National Memorial Cemetery of the Pacific, its worn volcanic crater rising from the congested city like the Acropolis in Athens, Greece, seemed deserted, although the next day it would be overflowing with a thousand guests—including the President—attending memorial services for the late Hawaii Senator Daniel Inouye, a decorated WWII veteran and until a week earlier, before his death, a powerful force in Washington and third in line for the Presidency.

When they reached Pearl Harbor, the Arizona Memorial came into view, its white frame spanning the sunken ship below. It, too, was eerily deserted, its flag at half-mast in honor of Senator Inouye.

Air Force One and fighter jets

At Hickam airfield, the pilot pointed out Air Force One on the tarmac. Nearby, an orderly array of eight fighter jets appeared, with space for a ninth. Was one jet in the air at all times? Patrolling the coast while the President was on island? Ready to shoot down any plane, even a tiny seaplane, that veered off course? A chilling thought.

From there, the pilot headed inland, over Oahu’s elevated central plain with its quilted acres of pineapple fields, coffee and cacao plantations, alongside the island’s western mountain range and across a deep rift in the earth known as Kipapa Gulch, to the North Shore, where winter waves can reach heights of 25-plus feet, drawing surfing competitions and crowds that often bring the two-lane shoreline road to a standstill.

At the edge of sunshine, a wind farm appeared, and beyond it, a rain squall. The pilot ventured a little closer to the island’s northwestern tip, edging out to sea to avoid the inclement weather, and then turning back (they couldn’t continue around the island because, with the President in residence at his Kailua vacation compound, a ten-mile, no-fly zone was in effect).

Waianae mountain range and a section of Kipapa Gulch

The partnership of sun and rain must have known what this day meant, though, because it conspired to bestow upon Jack and Jill a blessing in the form of a rainbow before whispering farewell.

Too soon the southern shore came into view, and the pilot landed on the tranquil waters of Keehi Lagoon with a gentle rapid-fire series of smacks rather than the usual rubber-wheel-on-concrete thud. The proposal ride was over. The TSA guards said their goodbyes and left.

just about to land in Keehi Lagoon, with Diamond Head in the background

And Jack revealed to Jill why he’d been allowed to bring the box on board: He’d confided in the guards that he planned to propose, they made the call, and the Secret Service had given its permission.

His high-flying, Secret-Service-approved proposal accepted, Jack got the “yes” hug and kiss he was waiting for.

A spring wedding is planned.