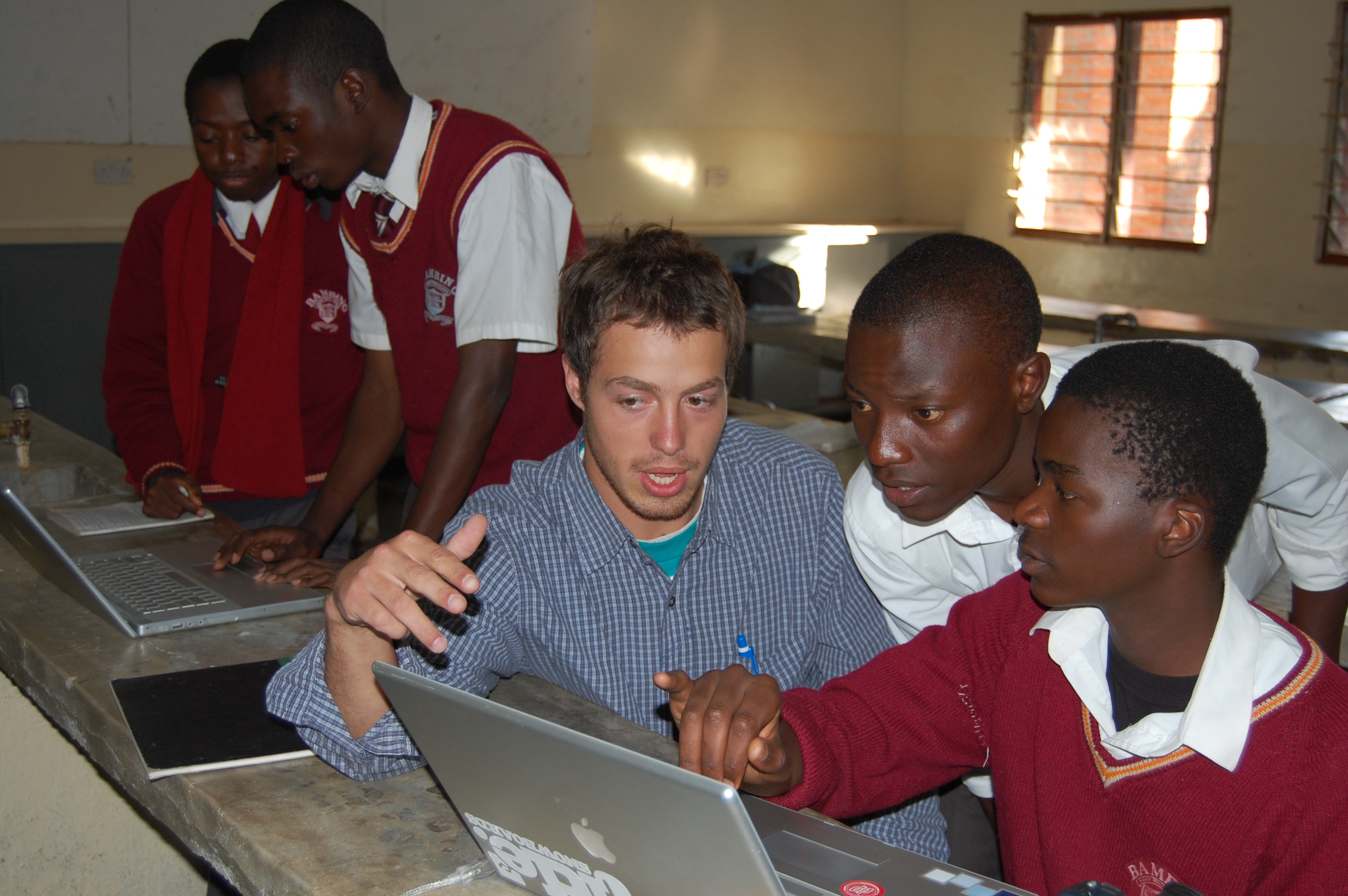 Running through opened doors to opportunity could be a life-directing motto for some. For every door entered, more adventure and experience you’ll gain. When an internship in Malawi leading a participatory video workshop on climate change to students became a tangible reality, I got right to work making arrangements.

Landing in Malawi’s quaint airport, I found transport organized by internship supervisors of the Red Cross/Red Crescent Climate Centre. It wasn’t my first time in Africa, but Malawi quickly proved unique. Driving to lodging on the outskirts of the capital, Lilongwe, we passed sections of land where dry grass had been burned–a result of children smoking out mice and lining them, charred, on sticks for sale.

So there I was, an excited second year university student walking through unknown streets toting video equipment through crisp morning air under a slowly warming sun. The omelet man–friendly fellow whisking precision, per order omelets at amazing speed where I lodged–had fueled me well for the first day. Finding the Bambino School on foot, I met Nelson, a welcoming headmaster who had arranged a select group of 15 students.

With participatory video, the teacher guides while participants become true leaders. This fit my style of communicating–I had zero formal experience actually teaching. All the same, I quickly connected with students, which inconsequentially is a number one priority in participatory work.

We had a brief week to produce a 5-minute documentary from conception to product with an inexperienced group, but things fell into place quickly. The group was bright and ambitious, with individuals willing to take leads, organize, document and facilitate progress.

Working in one of the classrooms, cool with a cement floor lined with chilled rows of marble desk, our storyboard formulated fast once we nailed down a guiding vision: how climate change has affected rural versus urban areas in Malawi over time.

Bringing the storyboard to life proved fruitful as those eager to film learned camera skills and others acted out scripts, conducted interviews and aided with set-up. At the end of the day, everyone had a laugh reviewing the day on film.

After initial introductory filming on site at the school, we were ready to walk through town in search of people with significant knowledge on climate–farmers, gardeners, those who have been around to experience changes. Meanwhile, Malawi Red Cross and Nelson were organizing logistics for a field trip to a rural village an hour or so away to capture the rural view later in the week.

The foot expeditions were exciting. I’d only experienced town so far through brief walking and driving, aside from lunchtime, during which most walked down a worn path leading to a nearby mill/store. Along the path, vendors sold an assortment of food and set up nifty stands with large metal bowls of oil to fry potatoes. Outside the store, ladies worked in traditional practice grinding maize (corn) into flour to make nshima, a staple food in Malawi, Zambia, Mozambique and parts of the Congo. Malawians see the process from production to eating as a form or art.

Each day we recapped and assessed what to do next while uploading footage and revising material. All the while jokes and tales were shared while musical influence enlightened. At one point I broke into Garageband and showed a few musical friends the

basics. Soon enough, they produced a catchy tune and recorded impressive lyrics. Here I learned a sort of talent show comprised of dance and musical performance to celebrate the end of term was Friday, the last day we were together. I couldn’t wait–not to leave, but to see the performance. Energy of those preparing acts was manifest.

With our urban section under wraps, everyone was jazzed to caravan to the rural village Salima. Many traveled in a mini bus procured by the Red Cross. I rode in a pick up truck with Marc, a Malawian Red Cross representative driving, Nelson in the front seat and myself nuzzled in the back of a 2-door with two students that had become particularly close–Richard, who had taken to filming, and one who went by his musical name, ZigZero, who was part of a local group that had produced an album and had a solo CD in local language, Chichewa. It was a fun crew.

Driving down lengthy stretches road with vast, flat landscape, we passed pedestrians afoot and occasionally pedaling–wherever their destination, they had a ways to go. Making a pit stop, we gathered refreshments, stretched legs and browsed. I found a sweatshirt unique to any style from home and bought it as a present.

Life was different–simpler–and expressed a presence of cheerful calm. Despite having access to less wonders, or evils depending on how you look at it, to the Occident, people exhibited resilient positivity.

Veering towards Salima, the driver noted fields of maize that rotate with nitrogen-fixing legumes to maintain soil health–no mono-crops or chemicals used, that’s for sure–just labor by knowledgeable hands.

Chichewa is the primary language in Salima. Having proficient fluency in English and Chichewa, ZigZero was the official translator and served the role phenomenally. He was astute and could convey what mattered quickly. I found his company and conversation always interesting, with wise words and philosophical thought that reflected his poetry and song.

Children ran about, dusty and full of energy and expression, excited to have visitors. Going through introductory motions, people were shaking hands while holding their wrist. The first few people I saw were elderly, and seemed to be assisting their arm through the motions. Then I saw younger people doing it and found out it’s a gesture of respect. An understanding of respect was apparent, and pleasingly noted through student’s slightly adjusted conduct.

A mat lay where villagers sat, elderly sat in chairs and students stood and occupied desks working through questions. Although I couldn’t understand, when we edited to subtitle later, stunning stories of floods, droughts, sanitation, storage and farming struggles revealed. Climate was no doubt effecting the rural and urban in different ways. It was great students were linking such relevancies.

Once the duties were complete, we spent time with the villagers communicating, attempting to communicate, and taking photos. The kids especially enjoyed photographs.

During our goodbyes, I held my right wrist with my left hand in a gesture of respect and felt a subtle connection beyond language barriers, one understood through eyes, expression and mysticism–despite simultaneously feeling like an mzungu awkwardly initiating cultural relevancies in a place obviously foreign to me. Nevertheless, like attempting to use a local language when traveling (outside of Montreal, where poor attempts at French are not accredited), the gesture was appreciated.

Mzungu, by the way, is a term mainly used in central, south and eastern Africa usually applied to European and American travelers. Roughly, it means ‘someone who roams around aimlessly,’ or someone who goes round and round without a clue as to the circumstances and world they are in. Packed up and beginning to roll, we waved as little ones chased as far as they could.

After a day in dry heat, everyone wanted to visit the lake, which I think had been on the surprise agenda all along. Lake Malawi is home to the greatest diversity of freshwater species on earth, the third largest, second deepest lake in Africa and ninth largest in the world.

We strolled near the water, a handful of people jumped in and more photos were taken. It was a relaxing endeavor after a long day, which made the ride home far more comfortable as our bodies wanted to sit and relax.

Back in the truck, we gathered a few bloopers attempting to record voice-overs for the film before Marc stopped at a fish vendor’s stand at a T in the road, more or less in the middle of nowhere, and purchased a sizable fish. He tied it onto the back of the truck, we bought a couple sacks of groundnuts from the kids and continued on.

Sharing success as we regrouped that evening, everyone was feeling satisfied with accomplishment thus far. I was impressed and grateful to work with a group of motivated, creative students.

Having documented everything is only part of producing a video. Uploading, organizing and editing can be endlessly time consuming. It was Thursday, we had to finish by the following day and the students had an active day of fun and shared talents ahead.

The next morning I starting strong with a satiating omelet before walking to Bambino, determined to teach and finish as much as possible. Although many had performances to prepare, we started working from a rough digital storyline. We knew what had to go where and how to do it, but it’s a tedious process. I took control to speed things up, while working closely with small groups. Select students were particularly interested and extremely helpful along the way.

We worked in a different classroom that faced the performance area, but had to take breaks to get a decent view and immerse in the energy. In front of a lively crowd of peers, students put on spectacular dance performances and showed impressive musical skills.

Both a great time and distraction, festivities continued while the movie came together; we were determined to finish. Progress was impressive, but we were still plugging away as the day closed, bringing everything together with transitions, adding credits, translating and tweaking until content. We didn’t finish before having to part ways, not completely, but I only had a few things to finalize.

Emotions were roused from the day’s events, the ending of term, closing of our time together and fruition of our project. Creating a documentary can be somewhat like reading or writing a story as you involve with the story unrolling, characters enter and depth deepens. On top of that, we had grown together.

More than making a movie, we made and strengthened connections new and old. We learned about climate change, each other and life–we all grew with shared experiences documented through photos and videos to remember by. A few of us keep in touch to this day and hope to reunite.

On another level, we created a short, compelling documentary exemplifying issues of climate change in rural and urban Malawi, produced by a rising, evolving generation, who learned from a generation soon to pass.

From the land to the food, people to climate, city to village, and land to lake, Malawi will live on through our experiences together and what we created in that brief week together.

If you have the chance, I recommend a journey to Malawi. View the video link below and you’ll find a few faces to look for while you’re there. And most importantly, always be open to accept opportunity when you find it ushering you in through an open door.

Please share any comments and check out the links below for our video and more.

Visit my blog, SolsticeSon’s Celebrational Servings, for more writing and this story with additional photographs.