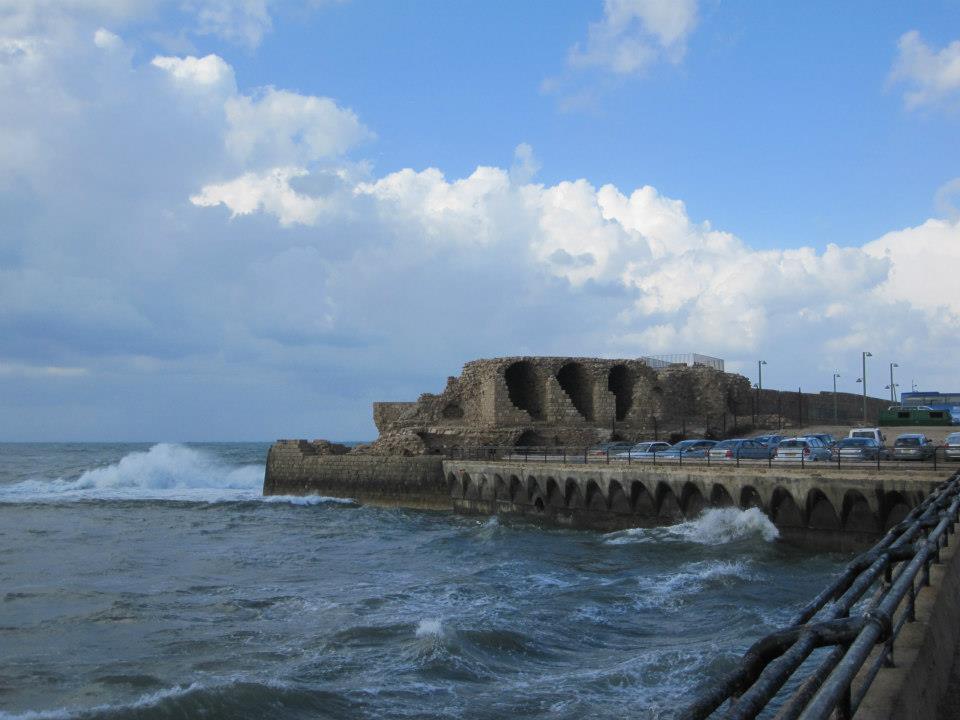 Last November, I went on a humanitarian aid trip to Israel, mostly working with prostitutes and drug addicts in Tel Aviv. On our days off we got to tour all over the country and one of my favorite places in Israel was the city of Akko. It’s one of few cities in the northern region that has been continuously inhabited since ancient times. The city is across the Mediterranean from Haifa (where my team and I stayed). Located on a peninsula and surrounded by stone walls, the quart of the city that we visited is mostly populated by Arabs. We were promised the opportunity to explore the ancient streets, a Crusader-era tunnel, and shop in the Arab market – and I was excited!

The rain was coming down in fat drops under a grey sky as we entered the city. The cobblestones were slick underfoot and we ducked our heads as drains dumped out torrents of water into the streets that were too narrow for cars to pass through. Already I felt as though I was walking through a city that hadn’t changed over the centuries. Buildings were made of bricks hewn from stone, other were white-washed and accented in blue, reminding me of a city I had visited in Greece. Out of nowhere, we heard the steady clip of hooves on rock – a horse and rider appeared from around the corner and we had to lean against the walls to let him pass.

It was as though we have been teleported back to the first century in this place so untouched by time. A domed mosque and spiraling minaret stood out against the cityscape and the only thing that reminded us of our reality was the afternoon call to prayer that rung out on crackling speakers.

First we visited a museum of Crusader artifacts. I would have hardly know the place was a museum were it not for the man behind a desk taking our money and a shelf with some brochures laid out. We descended a dark stairway to meet the opening of a tunnel that went for some distance under the city. It was built by the Knights Templar to smuggle in people and goods from the harbor during sieges. We had to duck our heads as we passed though (mind you, I’m only 5’1″) and the boardwalk we caravaned over bridged a trickling underground stream. The place was well-lit and artifacts from the era were displayed for us to see as we meandered through the tunnel. For me, it harkened back to a similar (but much older) tunnel that I explored just outside of Jerusalem, Hezekiah’s Tunnel.

At last we emerged from the Templar tunnel and were greeted with a blast of sea breeze. We were at the harbor and the wind was whipping the Mediterranean Sea into a frenzy. We continued our jaunt through the city, trying in vain all the while to capture the aura of the place with our cameras. The sun was clearing the rain clouds away for us and warmth stole into our bones again.

Our next stop was the Arab market. It was exactly what I had hoped. Scents of exotic spices greeted us as we entered the crowded market street. Our group of seven white women attracted some curious glances in our direction. A few older men were sitting at a plastic patio table together, smoking and chatting. As I wandered down the market street I was met with colorful displays of fresh fruit, the smells of cardamom and cumin, vats of dates and nuts, and the distinct smell of freshly caught seafood. I bought a cup of delicious Arabic coffee and continued to explore the market where now the booths were full of glittering, shiny jewelry and brilliant scarves and pashminas fluttered in the breeze.

There’s a strange romance about it, even though these markets are nothing unusual. The foodie in me rejoiced to see fresh food for purchasing and biting into the succulent date that a kind vendor offered me was a moment of bliss. There, the dirt of the streets melds with the stench of calamari, the sweetness of ripe pomegranates. It’s raw and real.

We enjoyed some delicious lunch in a restaurant overlooking the harbor, and then it was back to Haifa. But Akko will always have a place in my memories as a city untouched by time.