By Local Bus into the Himalayas 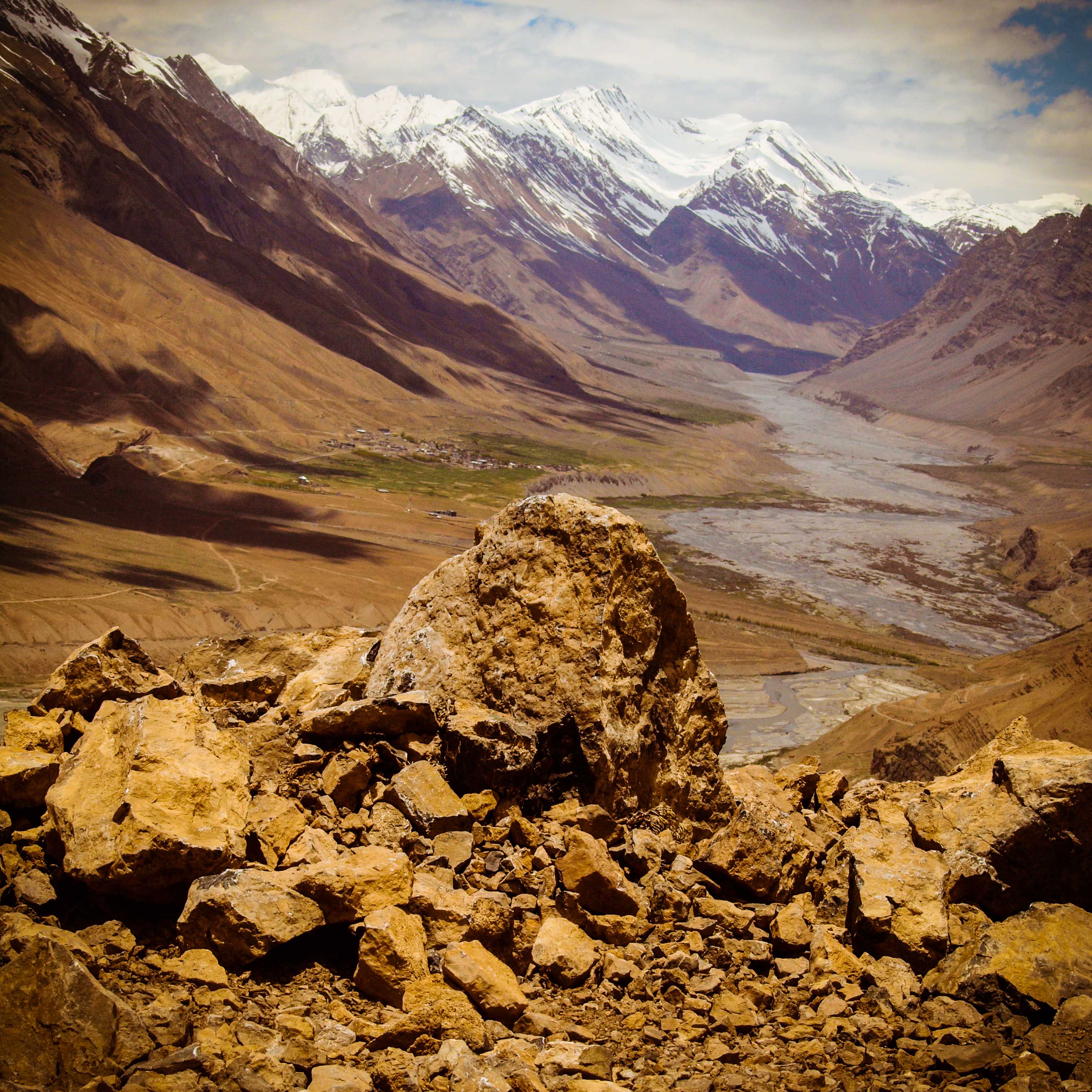 The gods, so it is said, would not journey by bus in India. They would also not journey by train, plane or hired jeep. Their being able to traverse the country with a step or two, while leaving footprints, seas and rivers everywhere means that such modes of transport are for us mere mortals. I wanted to go from MacLeod Ganj to Reckong Peo. The travel agent explained to me that the only way to get there was by local bus. For this bus I would have to get my own ticket which did not make him happy because he could not commission me for it. So he tried the second-best thing: he attempted to gently discourage me.

TA (cautious): “This is a long drive, sir. Twenty-seven hours.”

TA: “You have to get ticket downside, Lower Dharamsala.”

This suited me well. It made the whole thing very spontaneous, which was good. Most of the people I had befriended were ending their journeys at that time and I was ready to leave.

Indian busses are strange breeds. They come in many shapes, sizes and versions, different stages of decay the connoisseur might call it – travel agents will always try to get you on a super deluxe version, which usually means that it is rundown, about to fall apart but has a freezing cold air conditioning that cannot be turned off because the switches are all broken. Absolute luxury. The deluxe version cannot really be distinguished from the regular version, except by the price of its ticket. Some busses even offer the supreme comfort of your own private sleeping quarters. They consist of a curtained off box which is indeed large enough to sleep two people. Pure bliss, the travel-stained India traveler will say, until the bus reaches a bumpier stretch of the road and one notices the lack of hand-holds in the compartment box. Tumble drier or perhaps Deluxe Tumble Drier would be a more fitting moniker. Their bones thoroughly rattled the overnight traveler arrives as if they had chosen to travel by torture chamber.

A local bus is, by comparison, actually quite comfortable. You strap you bags to the roof or squeeze them underneath your seat. No luggage wallahs hassling you for fifty rupees for the privilege of having your luggage travel with you. Sitting next to the door you have to slam it shut after every stop, signaling the driver by the metal slam to go on. It will get very full, of course, but the windows can be opened or closed at your own discretion and there is no freezing air-condition.

The best thing, though, instead of being sardine-stuffed into a bus filled with tourist who are just as bewildered as you, you get to meet interesting people. A shepherd lady in colourful clothes I would later learn to associate with Kinnaur greeted me in a delightfully throaty voice. “Where to?” “Reckong Peo.” “My home”, she said. She was one of the many shepherds who spent most of the winter in warmer climes, shepherding on the hills of Western Himachal Pradesh. At least that was how she had started out. Now she spent almost all year near Dharamsala, only returning for festivals and family occasions. “Farewell, brother.” Her goodbye still rings in my ears. It had dignity and simplicity.

But before anything at all happened the bus broke down ten meters outside of the bus stop. It was a good place to break down, because the driver somehow got it to the garage and it was swiftly repaired. Indians are exceedingly good at impromptu repairs. Because things always break down, the cynic might say, and yes that is part of the reason, but they also love to tinker with everything, trying to improve it or making it at least more Indian in the process. You can find small repairmen’s huts in almost every village and dotted along the roads. Sometimes they have the required parts and sometimes they improvise – jugaad is the colloquial word for this – an improvisation bypassing limitations of law, logistics and money.

We drove along small roads and I could watch houses with small gardens pass by. People were working on small vegetable patches or tending flowers. Quiet suburban areas, very green, that seemed almost Mediterranean – an odd sight on the foothills of the Himalayas. When we left the villages I was reminded that India’s nature can be, despite all the pollution of the plains, absolutely stunning. We climbed up hills covered by pine forests, overlooked cliffs and ravines of some schist-y, fragile rock, dipped down into pleasantly cool forested valleys. Then it was back to the frenzy of typical Indian ant-hill busy villages. Shops and narrow streets that spilled people and vehicles. Faded colours and rusty signs proclaiming the world best something. Paan chewing, paunchy men and young boys and fragile ladies carrying trays with roasted nuts, sliced fruit, packaged juice. Cacophonous melodies of horns and voices.

Along the way I encountered a young girl worshipping Marie Curie as a heroine of female scientists, a trio of backpackers stranded on a bus station surrounded by a spasmodically curious group of young Indian men, ate dinner late at night in a dhaba with cement walls perched on a hill and found out that when night falls, on a local bus full to the brim, people huddle close to sleep, with strange heads resting on my shoulders and even my shoes.

At some point I entered the realm of sleep myself – only to wake up a few short hours later, back and legs cramped in pain, face pressed against the windshield. With bleary eyes I stared down a sheer abyss starting two inches from the wheels of the bus…I had arrived in the Himalayas proper, where the gods leave large footprints indeed.