The Huacas in the North of Perù

By: humanalens Posted in: Destination, Peru 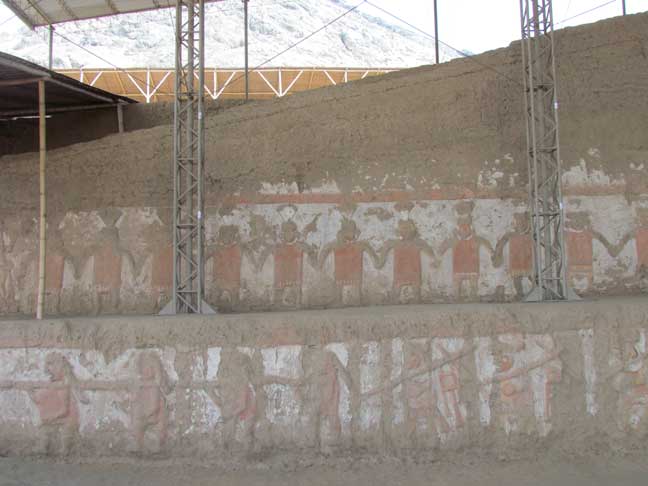 Last November, 2012, during a long period of work in the Chan Chan archaeological area (Trujillo, Perù), I enjoyed to visit, at the North, some other important archaeological places of the Mochica age. Briefly, I describe my impressions and leave other comments on my blog.

The El Brujo archaeological Complex is an ancient monument of the Moche culture that includes Huaca El Brujo and Huaca Cao Viejo which is famous for its polychrome reliefs and mural paintings, and the discovery of the Señora de Cao, the first known Governess in Peru, a mummy well preserved with the body completely tattooed. The landscape on the one side looks like moonscape: not vegetation, oceanic coast and ruins; on the other side cultivations and a small village. Only a break, made by the new modern structure of the CAO Museum, is between the two Huaca. The best preserved of these is Huaca Cao Viejo.

Huaca de la Luna is a large pyramid temple, located in the Huacas de Moche Site, the capital of the Southern Moche region, the other pyramid, in front of, is the Huaca del Sol. These monumental structures lie on the western flanks of Cerro Blanco.

Huaca de la Luna was the expression of the religious and political control and the findings connect it with the Moche warrior narrative. You can get to it after crossing an enormous walled plaza and walking up a monumental ramp and through a single, narrow entrance on the north end. The plaza where ritualized violence such as human sacrifice was conducted. The exterior walls are covered with the remnants of mural paintings and sculptured reliefs which testify the sacrifice ceremony, but every year they lose their red and blue colors.

The other monumental structure is Huaca del Sol, composed of several terraces. The Huaca is very eroded, thanks in part to sporadic yet intense rains. Looking also took its toll in Colonial times, when treasure hunters diverted the Moche river and washed away two-thirds of the Huaca. The entire Huaca was built of an estimated 140 million mold-made adobe bricks, so it is the largest adobe structure in the Americas.