Glow in the Dark Pilot Whales

By: Edd Hewett Posted in: Uncategorized

Early in the night, not long after the stars came out, we begun to get bio-luminescence around the boat.  Our wake was glowing and the bow wave was sparkling like a reflection of the stars above.  I kept a keen eye out for any movement and a keen ear out for the sound of any dolphins or other sea life.

Soon enough, I was rewarded as some Striped Dolphins came to put on a show.  I ran up to the bow and was very excited to see 3 dolphins twisting, turning, surfing and leaping around the front of the boat.  They were still leaving trails but the most captivating sight was their fin tips.  They didn’t glow a bright green like our last glow in the dark dolphins but rather sparkled.  It almost gave the impression of a child with a sparkler on Guy Fawkes night drawing shapes in the darkness except instead of having sparklers it was the ends of the dolphins fins and flippers that were flashing.

A couple of minutes later, 3 more dolphins came racing in and this continued until 15 minutes later we had around 15 striped dolphins lighting up the see.  Painting pictures with their sparkling trails.  I don’t know how long the dolphins were there for but I could have stayed up all night watching them.  Eventually, however, they did leave.

Me and Luke stood amazed on the bow occasionally muttering the odd ‘awesome’ or ‘incredible’.  Neither of us wanted to leave in case more dolphins turned up.  Meanwhile, the bio-luminescence was getting brighter and brighter until it seemed like the whole sea around the boat was glowing.  That’s when we spotted another splash about 50m away and closing in on us.  Dolphins I yelled but I was mistaken.  A huge creature about 4m long raced in, turned and swam alongside our bow.  It had us both speechless.  When we could finally stop making squeaks and yelps I managed to get out a ‘what on earth is that?’.  It was glowing so brightly, it even had a glowing bow wave of its own and when it came up to breathe it blasted glowing spray up at us on the deck.  We had no idea what it was but it was beautiful.

Luke switched on his head torch just for a split second and the dark figure it revealed was unmistakably a Pilot Whale.  One of my favourite species of marine mammal.  I ran around the boat shouting, trying to wake everyone up but by the time I returned it was gone.  Apparently 3 more had swum up and then all 4 had left together almost instantly.  The rest of the night featured more bio-luminescent dolphins and a bright fireball like shooting star but even now I can only concentrate on the picture of a glowing Pilot Whale in my head.

I was awoken for my morning watch early by the sounds of whistles.  Not human whistles but Pilot Whale whistles.  Its starting to feel like there’s no time for sleep on this boat.  Between watches, sightings, sorting through photos and videos and writing this blog I am getting less and less sleep each day.  No complaints though as I raced up on deck to find a group of around 12 Pilot Whales headed our way.  This would prove to be one of the best Pilot Whale encounters yet as the Pilot Whales showed no signs of being in a hurry and swam around the stationary boat for at least an hour.  There were individuals of all sizes from 2m to 6m and they really appeared to be enjoying themselves.  They were rolling around together, splashing us with their tales, swimming upside down, spy hopping (poking their head vertically out of the water), opening their mouths, rubbing against each other and the GoPro, whistling, clicking and pooing (which Conor collected samples of).  They were clearly interested in us and I don’t mean the boat as a whole but the people on the boat as individuals too.  Despite their long history of and even recent history of (they are still hunted in the Faroe Islands) being hunted by human whalers these mammals still seem to be very trusting around us seafaring humans.  They also appeared to be very intimate with each other and spent a lot of time swimming so close in a big ball shaped group as to be touching each other.  Needless to say we got some great photos and videos and were left absolutely exhausted, all our energy spent trying to contain our excitement.  Pilot whales are actually a type of dolphin despite their name.  They are mostly black in colour with a broad-based falcate dorsal fin and a bulbous ‘melon’ (bulging forehead thought to play an important role in echolocation).  They live up to 60 years and males grow up to around 6m.  They mainly eat squid and mackerel (we found squid beaks in their poo) and generally hunt between 200 and 500m depths.  Although they certainly can go deeper for food if necessary.

We also saw a couple of Turtles later in the day.  One of which appeared to be dead and so we went for a closer look.  Fortunately it woke up just before Conor could start to inspect and diagnose it and it got away without any probing.

Every day I plan to write more about the day to day life onboard a vessel like this.  I want to include more of the little things like bread making, swim stops, off watch activities, chores and such but we have had such an incredible run of amazing sightings and encounters with whales and dolphins recently that I never have space to write about the little things.  Maybe tomorrow but hopefully not. 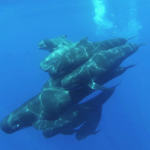 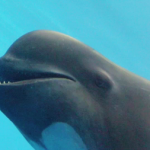