Climbing Palenque in the Mayan Jungle

By: Rose Boras Posted in: Mexico 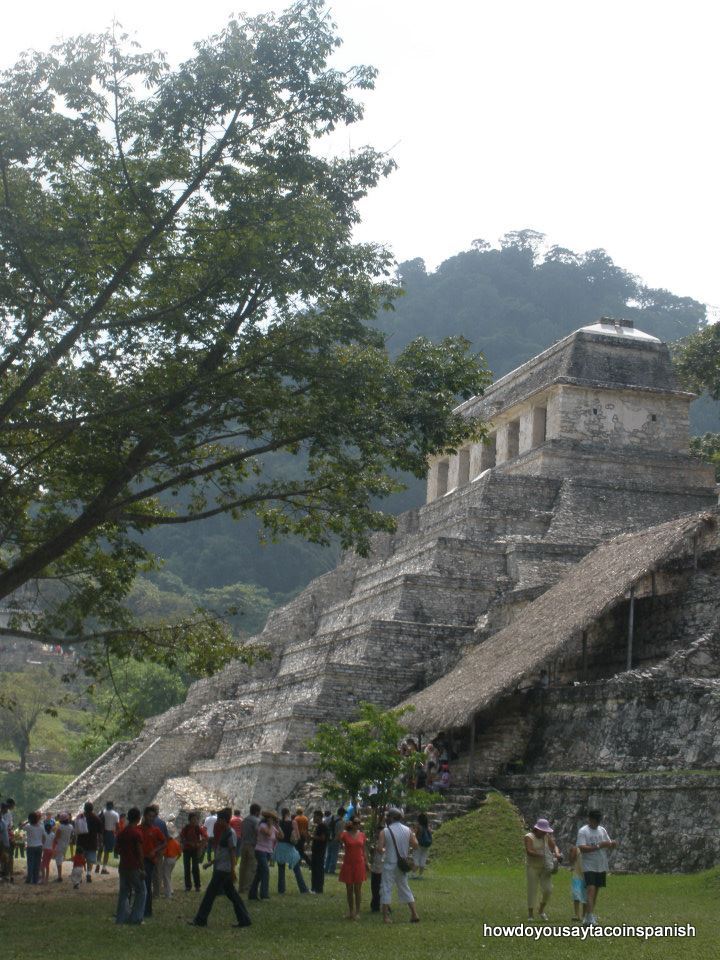 After my exciting and informative study abroad trip to Chiapas, Mexico, a few of us continued on to Agua Azul waterfalls and the Mayan ruins at Palenque.  I will save my adventure at Agua Azul for another time.!  Today, I want to show you Palenque.!  When I was younger, climbing the pyramid at Chichen Itza was one of my secret desires.  When I finally grew up, it was no longer possible to climb El Castillo.  The pyramid was roped off from further climbs due to erosion and graffiti from so many visitors.  However, you can still climb the pyramids at Cobá and Palenque.!  And since I really wanted to climb up a Mayan pyramid, I was happy that Palenque gave me that amazing opportunity.!!

Palenque is located near the Usumacinta River in the Mexican state of Chiapas.  It is a little over 400 miles or 7 1/2 hours from the Riviera Maya.  From the Spanish colonial town of San Cristobal de las Casas, it is about a 5 hour drive.  Palenque is the Spanish word for arena, palisade and fortification.  It was so named because the ruins are laid out in an amphitheatre style with a central pyramid.  However, the Tzeltal Mayan name for Palenque is Baak which translates to bone or boney.  Hence, the reason it has sometimes been called the bone place.  The bone reference may be due to possible ties to death, burials, spiritual rituals and sacrificial tombs. El Templo de las Inscripciones or The Temple of Inscriptions

The Mayan ruins of Palenque are considerably smaller than the sites at Tikal or Copan.  However, in terms of some of the best architecture, sculpture, and bas relief carvings produced by the Mayans (and the fact that you can still climb the pyramids..!!), it holds its own against those two sites plus Chichen Itza and Uxmal.!  Palenque was initially inhabitated around the first century BC.  Under it’s ruler Pakal in the seventh century AD, it became a prominent city.  The people began to abandon the city in the ninth century and several decades later it became a ghost town.  For hundreds of years, it was hidden in the mist shrouded jungles of Mexico.!  Finally, to be discovered in the 19th century.!

I loved Palenque..!!  Just as the Caribbean Sea location of Tulum made it truly magical, the jungle location of Palenque is what made Palenque breathtaking.  There were still many buildings that had not been resurrected from the jungle.  Tour guides provided a hospitable pathway through the jungle to see some of these still “sleeping” ruins; as well as, useful historical anecdotes.  Walking through the jungle was singularly one of the best experiences of my life.  And possibly also one of the scariest as there still are real, live, wild animals walking in the jungle as well..!!  But I enjoyed it immensely because if you closed your eyes for a moment and remained very quiet, you could almost see and hear the ancient Mayans bringing the city to life.!

The main buiding at Palenque is The Temple of Inscriptions or El Templo de las Inscripciones.  It is the largest stepped pyramid at Palenque.  The pyramid also houses the tomb of Pakal who had the building of the pyramid sanctioned after his death.  The Temple of Inscriptions also contains much of the city’s recorded history.  It is one of the pyramids I climbed while I was there.  Though I have to admit I came down the pyramid sitting on my butt.!  Just a little scared of heights and the many narrow stairs on the way down.  But well worth the climb for the view at the top.!!  I have heard stories that the view has brought grown men to tears from witnessing the beauty of the jungle from that vantage point.!!  No one who went with me cried, but we were all definitely awed.!  The photo above was taken on the steppes of The Temple of Inscriptions with my study abroad group.!

El Palacio or The Palace

The other major building at Palenque is The Palace or El Palacio.  It is a single storey building built in the shape of an irregular quadrilateral.  The throne room is located inside The Palace.  There are also three subterraneous ‘apartments’ inside.  These ‘apartments’ house some of the many mysteries of Palenque, such as the three great stone tables (or alters).  Moreover, the signature tower on The Palace did not originally have a roof.  Ancient Mayans exhibited sophisticated astronomical knowledge and used the roofless platform for star gazing.  However, early archaeologists who reconstructed the site were unaware of this morsel of Mayan history and put a roof of their own design on the tower.

The Palace was not only the residence of the king.  It also was used as an administrative site and to celebrate large gatherings.  On the east side of The Palace is a courtyard or patio called The Patio of the Captives or El Patio de los Cautivos.  It was a perfect space for public events such as receiving other nobles and leaders.  The enclosed walls are decorated with humiliated and captured slaves who were once free man to showcase the military prowess of the king.

El Templo de la Calavera or The Temple of the Skull

Other buidlings include The Temple of the Skull or El Templo de la Calavera.  As you enter the temple, there is only one skull still intact.  It appears to be part of a larger composition, but time, weather and the jungle have eroded the full stucco decoration.  The Temples of the Cross group refer to the cross-like images which depict the tree of creation which is a central component of Mayan mythology.  The grouping consists of The Temple of the Cross (El Templo de la Cruz), The Temple of the Sun (El Templo del Sol) and The Temple of the Foliated Cross (El Temple de la Cruz Foliada).  It is said that if three people each stand on top of the three pyramids, they will be able to speak and hear each other without yelling.  How cool..!!  My group did not get a chance to do this particular activity because by this point we were all exhausted from the climb and the humidity!

El Patio de los Cautivos or The Patio of the Captives

I highly recommend a visit to Palenque.!  I know it is a little off the beaten path, but it is so worth the experience.!  As a traveler, you can use San Cristobal de las Casas or the Riviera Maya as a home base.  There are many tour operators who you can book a group tour with if you don’t want to drive yourself.  Remember to bring plenty of sunscreen and wear a hat.  It is not only particularly humid in the jungle, but being in the highlands (and so close to the equator) brings you nearer the sun.!  Oh yeah, and let us not forget those pesky mosquitos.!  It is an adventure you will remember for a long time.!  And the climb is completely worth the trip. I know it’s one of my personal favorites 🙂  If you would like to read more about my experiences traveling and living in Mexico, you can check out my blog at
http://howdoyousaytacoinspanish.wordpress.com/.

Bas relief at The Patio of the Captives