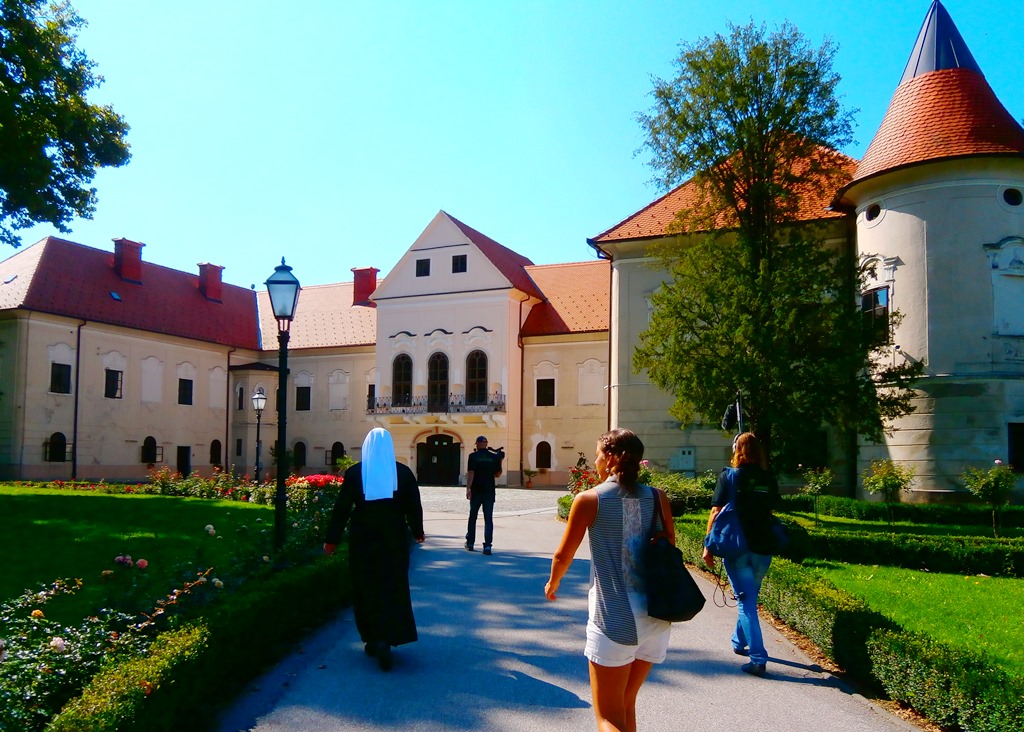 The Church of Santa Barbara, a 400 year old wooden chapel

On our excursion to the Santa Barbara wooden church we were met by Father Anđelnko. He explained the significance of the beautiful chapel built of native oak over 400 years ago and the unique craftsmanship that made possible the building of such a solid structure without the use of nails.  The interlocking logs are shaped such that the only way the structure could be built was like a puzzle, laying one log atop another one at a time from the ground up, and the weight of the logs was enough to bond the structure together. Original art on wood panels from the 17th Century

After we learned of the original artwork on the interior wooden panels and we observed a prayer before the handcrafted altar, Father Anđelnko invited us to join him in the reception hall where we were given food and drink, of course, because this is Croatia.  I do not remember exactly how the subject came up, but the priest said to those of us close at hand that there were two people he would most love to meet.  Not surprisingly, Jesus Christ topped the list, because he is after all a priest.  And number two on his list he said was Eric Clapton. Father Anđelnko not only loves the blues, he also owns a Fender Stratocaster on which he practices blue guitar whenever he gets the opportunity.  He also owns over 500 CD’s including every album on which Clapton ever played.  He even confided to us, “I sent Eric an invitation letter to come to Croatia for a visit as my guest.  Unfortunately, he never responded.”  I think Eric would come to Velika-Gorica, Croatia, if he knew how blessed and fortunate he would be with the hospitality of Father Anđelnko. On our visit to Zubinka and the majestic estate converted to a nunnery, we were greeted by Sister Belicalava.  Her warmth and ready smile were surpassed only by her self-effacing humor.  The sister, a woman of large stature, was asked to join us for a group picture with the lake in the background.  She said, “Oh no, your lenses are not big enough to include me.”  We finally convinced her to stand with us, and then it was suggested we do the ‘Ashley Jump’, Ashley Colburn’s signature celebratory cheer. (Ashley is our TV producer.) Sister Beliclava said, “Oh, please do not ask me to jump.  Our site does not have earthquake insurance.”  Such a quick wit and such an enjoyable personality! “En garde, Sir Ivan!” I wore a helmet for our sword fight.

Our day reached a climactic end with a visit to a partially renovated medieval castle and the gathering of the Knights of Zelingrad.  We were greeted by a local group reliving the traditions of the Middle Ages in period costumes.  After a demonstration of sword play and launching a replica catapult, we took part in archery and sword fighting.  Then we were invited to join the group for food and drinks because after all, this is Croatia.

I spoke with Ivan, my sword fight rival, about the history of the Croatia.  He asked me what I knew about Croatia, and I said, “I am impressed with your young country.”  He responded with, “Croatia is not a young country.  Our history dates back to the 6th century.  It is only now that the world is getting to know us.”

I continue to be impressed with the immense pride the Croats have for their country and their heritage, as well they should.  It is one of the most appealing and welcoming countries I have ever visited.