Spiders, Scorpians, and Snakes, Oh My! 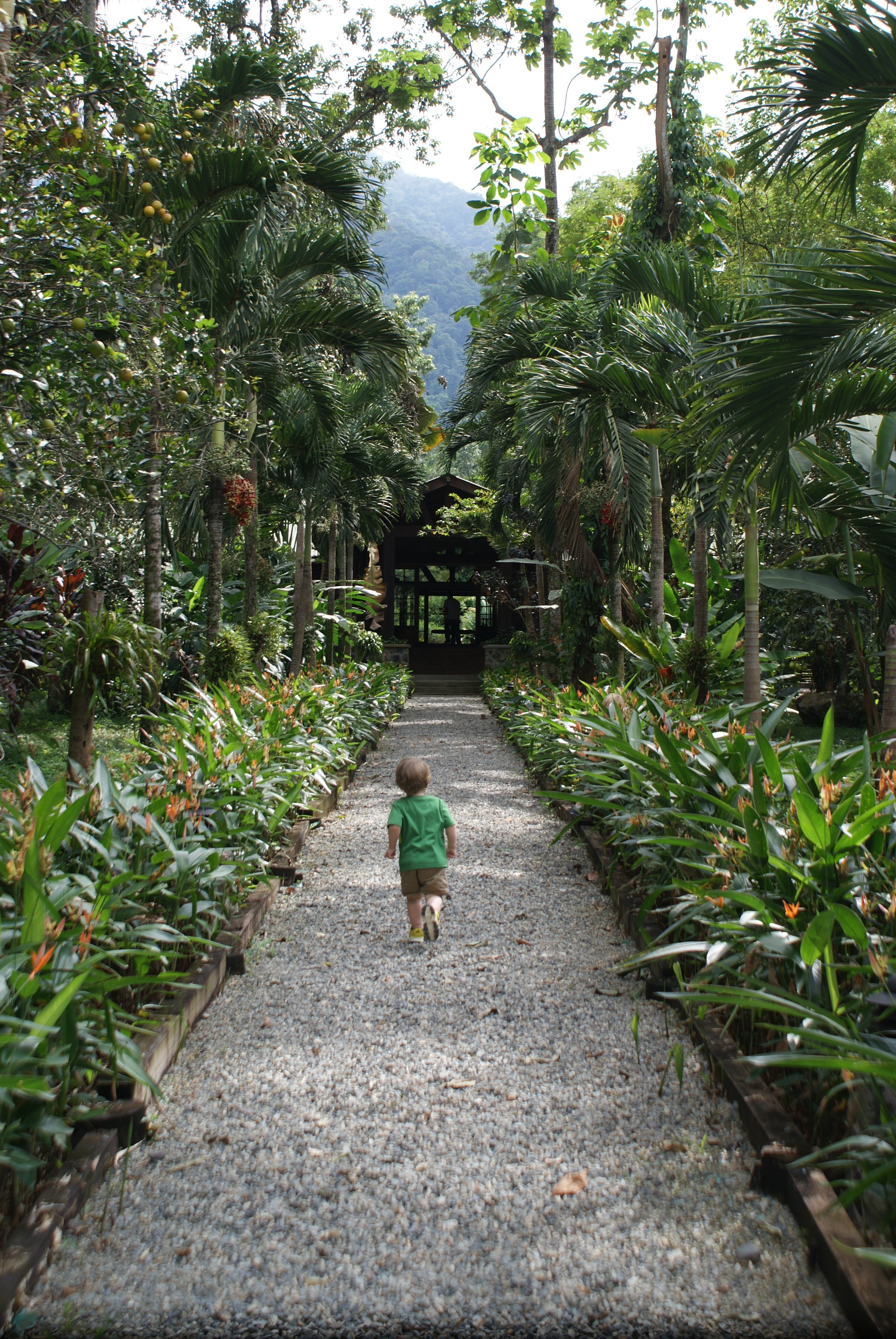 “I loved the night hike,” were the first words out of my four-year old’s mouth early one morning at the Lodge at Pico Bonito in Honduras.  Before he said good morning and before I even knew that he was awake, Finnegan was still talking about the previous night.  We spent our first day at Pico Bonito Lodge doing a lot of hiking (well a lot of hiking for a four year old and two year old) and exploring the extensive grounds and national park.

The Lodge is located at the edge of Pico Bonito National Park within a former plantation.  There are a lot of fruit trees surrounding the lodge and we were especially thankful for the orange trees, which the boys snacked on between meals.  They also ate their weight in rambutans, which look like sea urchins, after our driver introduced them to this sweet and addictive fruit on way from the San Pedro Sula airport to the lodge.  I couldn’t peel them so my husband was stuck opening every single one and I think he will be happy if he doesn’t see another rambutan for a very long time.

On our first morning at Pico Bonito, we met our guide Joel for a two-hour introductory hike.  We hiked to two separate swimming holes that were calm enough for the boys to swim in, an observation tower that I was too afraid to climb because I am deathly afraid of heights, and the beginning of the trails into Pico Bonito National Park.  The trails were hilly and steep at times, but well maintained and safe enough for Finnegan to hike on his own.  Honduras was more mountainous than I had expected so the hiking was tough, especially carrying Declan, our two year old, in a backpack.  We hiked for two hours and saw many birds, including two different kinds of toucans, a baby boa constrictor and a walking stick insect.

Finnegan was able to cover more ground than I expected, but tuckered out on the hike down from the second observation tower so Russ had to carry him most of the way down.  We finished sweaty with a pleasant burn in our legs and were ready to cool off in the pool.

The pool was too cold for me to actually swim, but the boys didn’t mind at all.  They enjoyed chasing lizards around the deck and playing on the steps of the pool.

Despite all of the hiking and swimming, Finnegan wasn’t down with taking a nap so we decided to visit the butterfly farm and snake house that are short hike away from the main lodge.  Before leaving, we saw a very large tiger snake that crossed over the main walkway to the lodge.  It was over six feet long!  Here is his head peaking out of the bush where he went to hide.

After dinner that night, we went on our third hike of the day with Joel.  It was a night hike that involved flashlights and lots of insects that had Finnegan giddy with excitement from start to finish.  It began to rain soon after we started the hike, but we soldiered on and were so happy that we did.  We saw some amazing wildlife and outlasted the rain, which eventually tapered off.  We saw a few red eyed tree frogs that seemed totally content in the rain, a large toad, a rabbit, sleeping lizards, geckos, an armadillo and an array of spiders.

The highlight for me was the net catching spider that spins a blue web or net, which it holds with several of its legs and waits for its prey to walk by.  The spider then closes the net very quickly to try and catch unsuspecting insects.  We saw him close the net a few times, but he came up empty handed.  This guy was my favorite jungle creature of the night.

Hands down the creepiest thing that we saw on our night hike was a cross between a scorpion and a spider.  It was like taking two of the most frightening creatures in the rainforest and mixing them together to make something even more horrifying.  There is definitely a horror film waiting to be made about this mutant.

So what did we learn from our day in the rainforest?  If you want to have a great time and really impress a four-year old, all it takes is a walk through the jungle at night with a flashlight (and a professional guide with eagle eyes to point out all the wildlife surrounding you doesn’t hurt either).  Thank you Joel for the highlight of Finnegan’s stay at Pico Bonito!