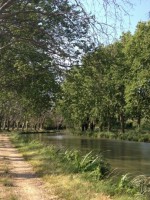 Featured writer: Margaret Foley While traveling, it’s often the places you hadn’t planned on going that become favorites. The Canal du Midi, a series of waterways linking Toulouse to the Mediterranean, was one of those places. We had a two-night gap in our itinerary between leaving London and arriving on the doorstep of our friends in Barcelona, and we thought we would…