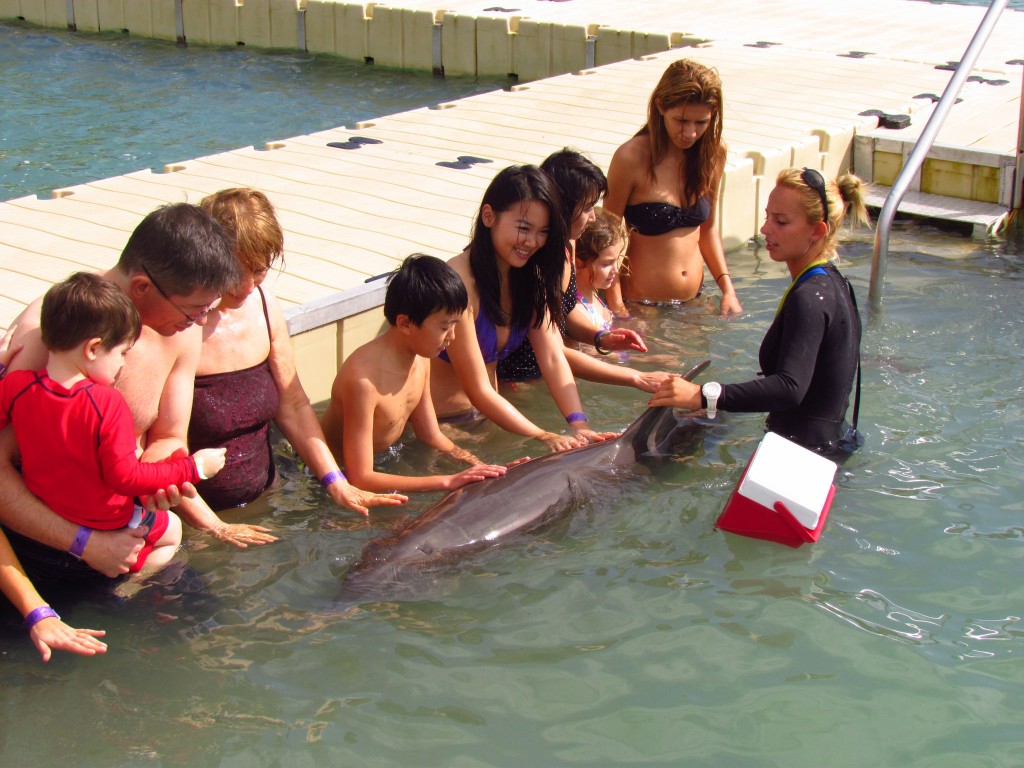 “Welcome to Jamaica!” Our tour guide said as he held the van door open. Our 11:15am group, dominated by families with little kids, entered the white vehicle anxious to get on the road.

“When do we get to see the dolphins?!! Can we swim with them?!!” A little girl with brown curly hair and big eyes asked her straight-lipped mother.

“No, you’re not swimming with the dolphins.  We’re doing the encounter, which means you’ll get to touch and kiss the dolphin.”

As we drove away from port and onto a scenic highway, a woman in the back cried, “Wow, look at that beautiful clean water!” Our tour guide smiled and shook his head, “Nah, that water is dirty!” The woman screamed out in disbelief and I wondered how clean can it get.

During the 40 minute drive, we passed through towns filled with white buildings with patterned walls and red roofs.  A few had green or yellow roofs that reminded me of the Jamaican flag. There were restaurants with open windows, shops, and a small corner pharmacy where a woman in a long orange dress stepped out. The way the streets were built uneven, the buildings disheveled, and people walking out and about reminded me of my visit to China few years back.  Such an environment may be considered by some as strange, even dangerous. To me, there was a soft echo of “home.”

Dolphin’s Cove seemed literally in the middle of nowhere.  As we drove into the parking lot, we could already see the previous group clapping their hands as two dolphins soared into the sky.

Our group stood around for a while waiting for further instructions. Finally, a man in a wet suit ushered us to an area of benches and gave us a brief introduction of the place, rules on interacting with the dolphins, and a few jokes. Then we changed into our swimsuits and walked down some stone stairs to where we met all the other trainers.

The “touch or encounter” group was split into two.  We were first placed on the side of the shallow pool where our legs dangled over the side into the water. Two trainers introduced the male and female dolphin and we squealed in excitement as our feet almost touched the beautiful creature swimming right below our feet. The male trainer first taught us how to distinguish a male from a female dolphin and also other facts, like how dolphins don’t have taste buds. Then they had the dolphins’ sing, wave, and splash us with water. They were adorable. I told my mom I wanted a dolphin for Christmas and my brother nodded enthusiastically.

Finally it was our turn to get into the water and see the dolphins up close. The female trainer had us place our hands out into the water so we could pet the female dolphin as she swam by. Her skin felt absolutely smooth and strong. As her tail passed me, I noticed that it was torn and another woman who noticed the same thing asked the trainer what happened.

“Shark attack when she was a baby.  We found her and saved her.” Then she showed us the long scar on the dolphin’s belly from the same attack.

After petting the dolphin a few more times, it was time to take turns kissing the dolphin in front of the cameraman. Moneymaking time for them. Most of the kids were reluctant and too scared to kiss the dolphin, but my brother walked right up to the plate and ended up having the best pictures of the group.

Afterwards, we decided to purchase the CD with all the pictures for $60 since it was the better deal out of all the options. While we were sitting outside on a bench waiting for our van, I remembered reading a review that said to check if we received the right CD.  Just to be safe, I went back in and checked and guess what?  Ha, they gave us the wrong group CD.  So we ended up making the rest of our group wait a few more minutes as we got that sorted out.