Reaffirming My Faith in Humanity, One Pedal at a Time (Part Two): San Francisco to Mexico

By: Lesley Posted in: California, Destination 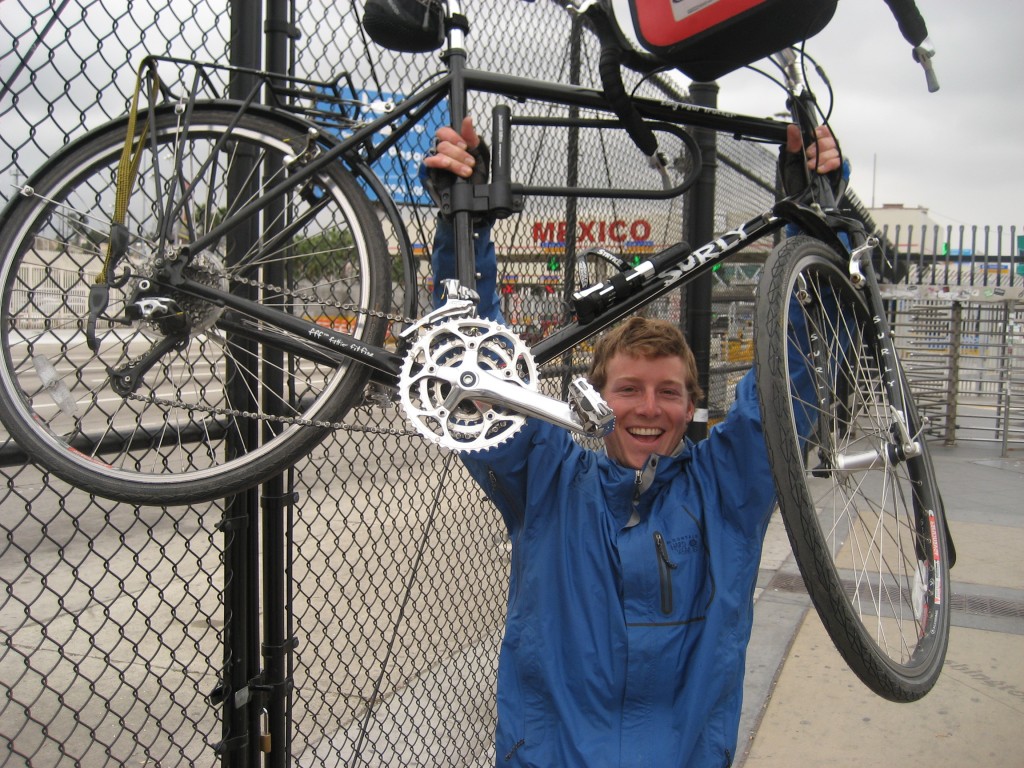 What happens if you decide one day to do something ridiculous, like bicycle from Vancouver to Mexico? Well, you’ll probably have a ridiculously good time. And you’ll most certainly come away with a heck of a lot more than leaner muscles and an incredible appetite.  In this second and final installment, Patrick Byrne recounts lessons learned from his latest adventure and tries to convince everyone that bicycle touring is the answer to all of the world’s problems.

“So where did you come from?” I had faced this question innumerable times throughout my trip, having piqued the interest of passersby who spotted the bulging saddle bags hanging over the rear tire of my bike, usually as I stopped for a lunch break at a grocery

store or gas station, sitting on a curb chugging a litre of milk.  In this particular instance I was scarfing down a deluxe burrito at a roadside Mexican food stand when a middle aged, rotund and unkempt man approached me with the question.  “Coming from Vancouver,” I responded.  When a blank look crossed over his face, I elaborated, “In Canada.” “Oh! The other country!” he said. This gentleman, like most of the people I met along the way, was genuinely curious about my travels. When he asked the second most popular question, “Where are you going?” I naturally started saying “San Fran…,” my original destination when I left Vancouver in September with three friends.  But plans had changed and now my destination was none other than the Mexican border, and I was alone.

My companions who had cycled with me for about 2000 kilometres were shipping their bikes home in Santa Cruz in favour of continuing their travels by backpacking around Central America. I had originally intended to join them, but decided to continue biking for two reasons:

1) When I began the trip in Vancouver, I would never have even dreamt of biking solo. Now I had the confidence to go it alone, nowhere to be for two months, and all the equipment. Why stop?

2) It struck me one day in Oregon, the salty wind in my hair, the miles flying by effortlessly and the feeling of immense satisfaction that can only be experienced after  propelling yourself a considerable distance entirely under your own power, that my dad would absolutely love to go on a bike tour. Again, the timing was right; my father was taking time off from work as he dealt with the challenges of depression and so in theory would be able to join me. I decided to take the risk and start off on my own, with the idea that I would work out the details as I went.

I left my friends at a coffee shop in Santa Cruz. Biking away from them that day in October was perhaps one of the biggest challenges of my entire trip (100,000 lb logging trucks speeding by me with one foot of clearance notwithstanding). But the decision had been made and they had already shipped their beloved bikes back to Ontario. Now I found myself slowly pedalling away from my companions, biking into unknown territory, completely alone. A gut wrenching bought of loneliness when I stopped for lunch at a scenic beach overlook reminded me that meals, whether in a cozy kitchen or sitting on a guardrail at the side of a highway, were meant to be shared.

The road was twisty and the shoulder was small, but I had plenty of room because cars were few and far between. For one of the first times of my trip, the ocean was no longer comfortingly at my right side. After a week of rest and relaxation with a beautiful family who welcomed me (a complete stranger) to stay in their home in the town of Solvang, I was biking east into the Angeles National Forest reserve that contains the San Gabriel Mountains just to the north of Los Angeles. My destination was an organic peach farm, a small establishment nestled in the mountains that could not have appeared more idyllic in its descriptive website.  Think happy hippy commune, organic vegetables and fruit, beautiful landscapes, meditation and yoga lessons included.  It wasn’t until after the gruelling 8 hour, 3000 foot climb to the farm, that I realized how secluded I really was.  The goal was to stay here for about a month, living and working while I waited for my father to join me in Los Angeles to complete the trip.

Looking around me, I noticed the farm nestled in a small valley running between two long ridges, low-lying scrub bushes clinging to the sand of the high desert landscape.  The fields of peach trees stood out against this backdrop and a few farm buildings were the only evidence of any habitation for miles. Then I looked a little bit further, to the edge of my field of vision.  A twelve foot fence topped with a generous portion of razor wire abutted the farm on the western edge. A small sign read, “Juvenile Detention Centre. County of Los Angeles.” The only neighbour for miles was this prison, which I later learned was instrumental in the creation of this very farm: a convict had escaped twenty years ago and killed the previous owner with his own shot gun.

My spirits remained low as I learned that there were only two other people at the farm: Dada, a small but stern, long-haired monk who oversaw the farm’s operation on behalf of the Ananda Marga ‘spiritual organization,’ and Bob, a shifty eyed man in his mid 50s who could somehow produce a fully bristled face in about six hours who described himself as a “silent homeless man.”

I settled into the lifestyle of the farm, waking with the sun streaming into my small bedroom, outside working by 8am, finishing up as the sun hit just the right spot on the western ridge of hills. My chores ranged from the mundane (weeding) to the mind-numbing (digging holes that in my opinion did not need to be dug, refilling the same holes that never needed digging in the first place). While at the beginning it was difficult to work alone all day at simple repetitive tasks, I soon came to appreciate the solitude after being given shared projects with Bob, the world’s most talkative silent person.  As we shovelled and generally slaved away, Bob would look around furtively to make sure Dada wasn’t watching, then put the shovel down and in a conspiratorial tone ask me questions like, “Do you think they really landed on the moon?” and “They don’t have those chem trails from planes in Canada do they?” And don’t even get him started on ancient prophecies.

Aside from the 7 hour work days (6 days a week), the odd practices (a complete prohibition on any and all foods containing meat, garlic, onion, mushrooms, caffeine, alcohol, chocolate), and a particularly rough 48 hours of violent food sickness due to expired vats of food bank yogurt and cottage cheese (the farm was not doing so well financially), I found myself deeply appreciating the simple lifestyle that afforded ample amounts of time for introspection.

My time at the farm quickly wound down and I was once again thrust back into the whirlwind of the daily rigours of bike touring. Before leaving, in both an act of generosity and defiance, I biked into the nearest town and purchased the largest cheeseburger I could find, gifting it to my meat-deprived farm companion Bob. If anything, maybe he wouldn’t think I was spying on him for Canadian intelligence anymore. But mainly, I wanted to prove to both myself and him that what I had experienced thus far in my travels was true: people are kind, generous and to be trusted, despite the often silly fears we harbour.

The time soon came to continue along and I bid the farm farewell, both relieved to be leaving and appreciative of the unique experience.  As I pitched my tent in a small clearing of the forest overlooking the deep valley below, just out of sight of Interstate 5 which snakes its way into the heart of LA, I took one last chance to pause and appreciate the silence, knowing that I would soon be entering one of the most notoriously busy, sprawling cities in the world.

Finally the day arrived and I patiently waited at the baggage claim area at LAX, scanning the crowd for the tell-tale sign of my father: a neatly coiffed salt-but-still-mostly-pepper head of hair rising a few solid inches above the general population. We happily embraced and set about piecing together his bike in a quiet corner of the airport. Our busy first day ended with a hectic 20 mile ride to our CouchSurfing host in the heart of the city; an arguably unnecessarily tough start for a bike touring novice. Pushing myself outside of my comfort zone was a major part of what I had found valuable throughout my trip, and part of the rationale for such a challenging start to the trip for my dad was that I wanted him to experience, and share with me, the experience of being truly challenged.

But at times I worried that perhaps I had pushed my dad too far, that I had expected too much and forced him into something he wasn’t quite ready for. I began to feel foolish for thinking that bike touring could change somebody, could ‘cure’ mental illness. I thought I was doing him a favour by forcing him to face life with spontaneity and curiosity. That his medications and doctors appointments were useless when compared to the experience of receiving unparalleled generosity from others on a daily basis, being exposed to new experiences, people, and places. But gradually, my dad rose to the occasion, undergoing the traditional peak of exhaustion on the third day of biking, making it through notoriously dangerous stretches in Long Beach unscathed (and uncomplaining), and successfully climbing a massive hill after getting his tire stuck in a ditch and (gracefully) falling into the bushes. We made it through sketchy roadside campsites, a hilarious (if dangerous) ride from a man who was completely stoned, and getting hopelessly lost in San Diego.

But my understanding of my father deepened immensely on the day we rode to the Mexican border. As we left the campsite that morning, Dad awkwardly gave a left-handed money handshake to a young father whose family had recently had their home foreclosed. I laughed a little bit inside, both at his clumsiness, and his tremendously good heart. He truly had embraced the ability to both receive with gratefulness, and give generously, lessons I had learned years ago from him, but had only recently truly discovered for myself as I cycled alone. So later that afternoon, as I hoisted my bike over my head to celebrate the completed journey, my father manning the camera and encouraging me to revel in my accomplishment, I knew we had truly done something special not only for ourselves, but for each other. Never would I have imagined that a) I would bike from Canada to Mexico and b) that I would have the honour of my own father joining me for the last leg.  And I realized then what was really the magic (and enduring lesson) of bike touring: you never know how things will end up, but if you approach life with an open heart and an open mind, good things will most certainly happen.

Part one of this story can be found at http://www.bucketlistpublications.com/2012/02/14/reaffirming-my-faith-in-humanity-one-pedal-at-a-time/

Check out other articles by Patrick at http://searchingfortheroadlesstravelled.wordpress.com/