Our Ships of the Desert 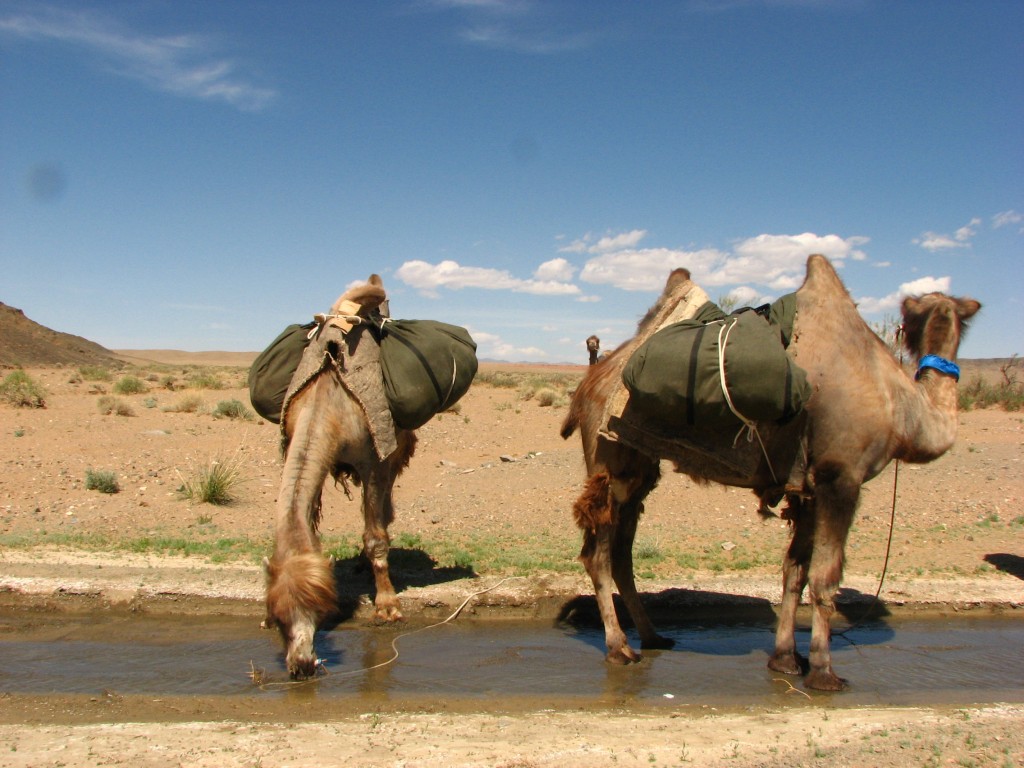 Besides the homo-sapiens on our team, we each had an animal counterpart in one double humped Bactrian camel. Like the humans though, they came with colorful and varied personalities and abilities.

It was the first time for all of us at handling camels. Agii, Albekh, Janka and Wantok were the only folks who had lived and breathed camels all their lives.

On the eve of day one, we met them all from a distance. At the camp by the lakeside they were lined up and roped to a common line. There was even a calf running around in the camp. As far as I know, our team was all males so the calf was probably only a temporary attraction. It was strange to see the small one gallop around and imagine him as a big fully grown camel one day. They really are huge. The family which owned the camels had come to say hello and see which crazy people would now own their livestock.

Faraz was encouraged by the townsfolk who had gathered to greet us to climb and ride a camel. He tried unsuccessfully to get on one thrice. Much to the amusement of everyone, especially the kids, he was thrown off each time.

The next day, we had time before we left since the camel ownership papers were some time in coming from the town of Bulgan nearby.  The day dawned at 4.40 am so it was bright and sunny by the time all of us made rounds of the camels. There was one which was whiter than the others; that was Shadow. Another had a blue ribbon tied around its neck. He soon came to be called Blue B**tard due to his habit of kicking and spitting. But he is turning out to be the strongest of them all. Lauren choose hers—Bumblebee—a mild mannered and golden haired specimen. There was one whose twin humps were sharp and triangular, (No, I don’t mean to describe anything else other than camel humps :P) and he was appropriately named ‘Toblerone’. There were several more that remained nameless.

I did not choose Oliver right away. I was prepared to change the name to Olivia, should my pet turn out to be a she. But I was saved the trouble. I thought I’d watch all the camels in action, while grazing and on the line eventually choosing Oliver.

Our first lesson in “cameletiquetts” was to make it sit and stand. “Chhugh” is what you need to say with some amount of force while pulling the rope downwards to get the camel to sit. When the camels are young, a wooden peg is passed through their nasal cartilage, just above the nostrils to secure a rope. The Mongolian camels are not really used to a halter or a bridle. One side of the peg is a thicker, preventing it from slipping out and on the other the rope is tied with special knots. To prevent the knot from slipping, the camel handlers push a cork or a plastic bottle cap up the peg. So the camels permanently have a rope attached to their pegs and this is the one we pulled on.

If you wished to have him get up and follow you, all you need to do is hold the rope and start walking in the front. The camel will get up and follow, unless he wants to cause trouble or protest.

There are several ways to handle the camel depending on what you want to make him do. All Mongolian camels are usually used to being, mounted and loaded from the left side. They get nervous if you approach from the right side. I noticed that if I walked along their right side, they would all move away from me and bunch up, requiring the person who was leading them to sort them out. If a van, motorcycle passed nearby, they would act the same way irrespective of the side. But this was more due to the noise of the vehicles than the side they were approaching from.

We always needed to approach a camel from the front and then head to his left if we wanted to lead him, untie him, tie him or rope him to the line. They also like being nuzzled along the length of their necks, again from the left.

A loose camel will always run on further, if chased from behind. A trick we learnt effectively from Albekh was to run away from the camel first, convincing him that he is not being chased and then circle back to approach him from the front. If you are in front, the camel will not usually challenge you and run towards you. He might shake his head to prevent you from catching hold of his rope, but the running effectively stops.

As days passed, we moved quite a distance away from the habitats the camels were used to and also they began missing their usual grazing grounds. When this happened, they started getting nervous day after day. This nervousness manifested itself in team members receiving some kicks. Lots of spitting, grunting, and moaning began happening around loading time every day.  On some days a camel sat down bang in the middle of nowhere and had to be coaxed to get going once more, causing some delays. In such situations, Agii and his team were always at hand, helping and guiding. If the load was not properly balanced, the camels would stamp their feet, refuse to move ahead or grunt a lot.

Like most cattle, the camels regurgitate their fodder and keep chewing on it. This habit gives their thick lips and green/yellow ting and their phlegm also takes the colour. Though being spit at seemed disgusting at first, I realized that the green slim dries and falls off your clothes and the phlegm leaves no odour whatsoever.

With camels, you have to be agile and very watchful. They can pull themselves loose in the wink of an eye and run on till they are dead, which can be several days. If you are riding them, they can act weird and be upset by the slightest of things like you trying to adjust your perch. If a fellow camel is acting mad, stomping his feet or kicking wildly in the air, you need to quickly isolate them from each other so that they all don’t react and do likewise. To help this, camels are not tied to each other or to the holding line with a tight knot. Their knots have to be of the type that causes the rope to be completely free in one pull. Only this way can you isolate them or lead them quickly away should trouble arise.

It is the same principle with the loading. The camels already have a thick furry blanket on their back, anchored to their humps so that it does not slip off. Over this, we used to put a canvas loading bag with two big pockets on both sides, and a bridge between. They also had flaps to cover the luggage that went inside. Once everything was placed on both sides, making sure the loads were equal, the flaps were closed and the bag was closed by securing the nylon tabs sewn on the bags to each other. After that came the rope that had been passed under the camel’s belly. First the bags were lifted, the ends of the rope was passed to the other side and pulled well to make sure the bag on either side did not hand too much. Then the rope was passed under the bag and looped at the top. Once more it was pulled up to prevent the bags from sagging and then a knot was formed on top with a loop, a figure of eight or any of the climbing knots was never to be used.  Through fragile to look at, the knot stayed the whole day without slipping. This whole procedure though hard during loading, was a breeze when unloading. We just had to loosen the ropes, untie it completely, hoist the bag from the camel’s bag and lo, the animal was free to get up and graze.

Most of the camels we had were fairly behaved with occasional spitting and grunting. BB spitted the most but is a strong contender to last till the end of the expedition.  Towards day 25, a lot of them started groaning like a human would, with loud, distinct and clearly protesting noises rising from their throat. One of them moaned every time he was loaded, mounted or unloaded. Though there is much respect, the Mongolians have no attachment to their camels or pet dogs for that matter, more than necessary. They don’t give them names or pet them often. I have seen Ger owners throw stones at their own dogs to prevent them from charging at strangers (us!), if the scolding has no effect. And I think the pets don’t expect any fondness either, they are usually collarless, wild, stinky and flea ridden.

About 4-5 camels have already been sold to people along our way since they had grown weak or had a drop foot.

Which bring me to how I chose Oliver. Well, he was the one leading the pack at all times and was ridden by Albekh. We never loaded him until much later in the expedition, when some of the camels could not carry much loads. First out of camp, and first into the next camp.

I think he looked handsome in the neck decorations I had taken along and separated him from the rest. I’ll miss you when we cut you lose, Olly!

Read more from this author at: http://latitude46north.blogspot.in/2011/07/our-ships-of-desert.html