Brim of the Bucket 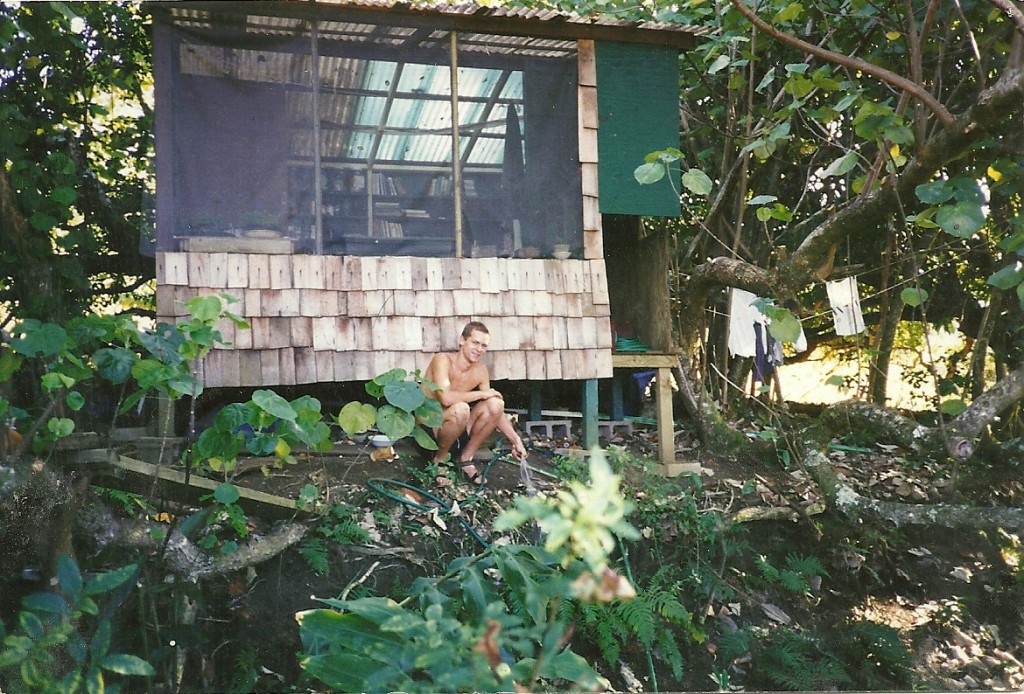 When you’re walking in your true path, the universe has a way of letting you know. The first time I experienced this I didn’t know I was on a path and had just enough recognition to grasp the signs.

The year before I’d decided not to go to college, to break from the school cycle after a literal lifetime of learning (or is that a lifetime of literal learning?) I was happy baking bread and making money. But as the seasons changed and I saw my friends go back to school, it became apparent that working in a bakery wasn’t going to be enough. My life had become a long, straight highway and I had no idea how to drive or where I wanted to go.

I went home. After two years on the mainland, I returned to Maui with $300 to my name and nowhere to stay. While I’d been away, my parents had moved off-island and rented our house to a family who valued privacy. The adjacent cottage was off limits. I did manage to weasel a few weeks use of it out of my dad – mainly because he was going to be there.

“Well, son,” he said, not quite emanating approval, “what are you planning on doing now?”

I told him that I had a tent, but what I really wanted to do was build a hut out of organic materials and thatch the roof. There was plenty available – I grew up on a 5 acre farm in the country. But my dad just laughed and reminded me how much it rained.

As if to emphasize his point, it poured for the next three days. The ground flowed and the dried up streambed which ran through our property gushed with dirty water. My father might have preferred me to be away in college, but he wasn’t going to let me mildew in Huelo. He offered to help build a hut.

Proud as a fool, my individualism got the better of me and I only let him help to choose and prepare the site. I wanted to do the rest.

Fifteen years ago I wrote these words: “I am Walden. No, I am Thoreau, doing an experiment in Transcendental living next to Walden Pond, two miles out of town in the purity of nature…”

On the eve of my father’s departure – the last week of my cottage rights – I got a call from Nanhoi, a fellow I’d met earlier in the year through a common friend in Los Angeles. He could’ve been from Hawaii so I asked. He wasn’t, but he’d been once and was planning on returning, so we exchanged numbers. It turned out that Nanhoi and his girlfriend were the first people to sleep in my unfinished hut.

The following day, we drove to Hana. As folks who don’t know each other very well are wont to do, we told stories about ourselves. Nanhoi and his family had visited Maui when he was ten; they’d stayed with friends who lived near Venus pool. She had never been.

I told them a strange story about Venus pool. On my last day in Eugene, an old hippie sat next to me in front of Sundance Foods and started talking about sufi dancing. As politely as possible I told him I was unavailable because I was leaving town. He got a wistful look and said that the last place he’d been was Maui. ‘That’s where I’m going!” I exclaimed.

Then the hippie asked me to do him two favors. One was to place a large crystal in a special place on the island for someone in need to find. The other was to keep an eye out for Vasu Deva around the Venus pool. If I saw him I was to put my thumb to my nose, wiggle my fingers in the air, and tell him that Rainbow Dancer said HA!

As if that wasn’t strange enough, after I pocketed his crystal – five inches long and more than one in diameter – we shared a charged moment of silence before looking at each other and acknowledging it. ‘That was weird’, he said. ‘Yeah, kind of like Bilbo and the Ring,’ I returned. He immediately stood up, shook my hand, and walked away.

Needless to say we decided to visit Venus Pool and immediately ran into the family Nanhoi had stayed with. They’d just returned from a trip – gotten off the plane and driven straight to the pool. We sat around marveling at the coincidence. Then a naked hippie approached and introduced himself as Vasu Deva.

That was when I knew I was in the right place. I could build a hut – and a life – from scratch on my parent’s land. If the materials weren’t exactly organic, most of them were recycled. I could learn how to garden and set up solar power. I could live a rich natural life without school or a job. And for a while, I did.

I placed the crystal in a very special – but findable – place inside of the Haleakala crater. Though I was tempted to keep it, I managed to escape with all ten fingers. When I moved into the hut it was equipped with a two-burner propane stove, a sink with very low water pressure, and a tapestry for a door. I borrowed an air mattress and dug a hole for an outhouse. It was rustic, but it had a great view.

Over the years, I’ve lost and re-found my path, and lost it again. Sometimes we have to lose it in this world, like postponing our personal goals for the integrity of parenting. But sometimes the best example we can give our children is to pursue our dreams with unparalleled passion. That’s where I am right now. It’s how I met Lesley Carter and it’s why you’re reading my words today. Before kicking the bucket I plan to fill it to the brim, and I hope you do the same.

Oh, and if you know Rainbow Dancer, please tell him that Vasu Deva says HA! right back.

Read more from this author at: www.callmethoreau.wordpress.com