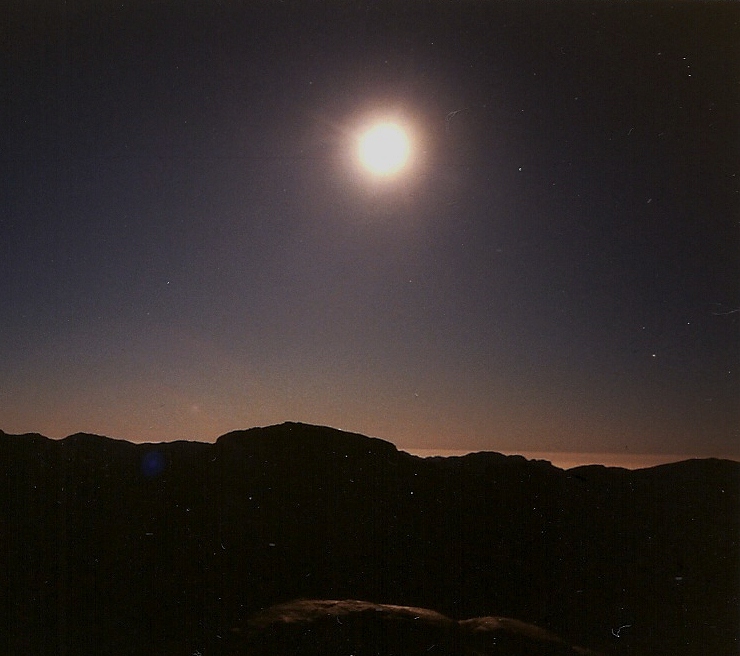 Jerry and I were in Egypt. It was a dream come true. We’d already been to Jordan and Israel on this trip and had seen and experienced so much!

Our first day in Egypt we were in the Sinai Peninsula and stayed in a rather rustic resort at St Catherine’s. There we were presented with a unique opportunity! Go to bed early, be awakened at 1:00 AM, by 2:00 AM begin climbing Mt Sinai! What? Mt. Sinai that Moses climbed thousands of years ago? Us? Well, we are adventuresome and so we decided to climb Mt. Sinai! We were with a small group of folks, which turned out to be so important and fortunate.

It wasn’t an easy, leisurely trip. We went by bus from our resort. When we arrived at the base of the mountain, there were camels available to ride, but Jerry and I enjoyed hiking, so we opted to walk. After all, Moses hiked up the mountain. We would too.

Mt. Sinai is 2,285 metres or 7,494.8 feet high. It’s also called Moses’ Mountain or Mt of Moses. Is this really where God gave the Ten Commandments to Moses? Well, I guess no one knows for sure. It took us three and one half hours to climb it.

An unexpected blessing was a full moon! We didn’t even need flash lights…

I’d better add here that neither Jerry nor I were in physical shape for climbing a mountain. But we were determined! A young boy, with a camel, was following us at a close distance. Every few minutes we’d hear him say, “Ride my camel?” We’d smile and say, “No thanks, we want to walk!”

Then the mountain began to get steeper. I was getting out of breath. I had to stop and rest every little while. Jerry patiently rested with me. We were at the back of our group…way at the back.

The boy with the camel came up every time I stopped. “Lady, you ride my camel?”

Then he began to get persistent. “Lady, you must ride my camel.”

I wonder where he learned English! Anyway, I knew he was right. I could not climb this mountain. I  was exhausted, out of breath, ready to quit. Jerry looked at me and said, “Go ahead, ride the camel.” But he still insisted on walking. Jerry wanted to be able to say he walked up Mt. Sinai. The camel and I passed him and I felt so helpless. He insisted he was okay and not to worry about him.

It was the best thing I did on our trip up the mountain! Although it was very scary when the camel stood up. To rise from a sitting position the camel’s hind legs stretch up first, then his front legs. I felt like I was going to fall forward, right over his head! But the camel’s boy helped me and once he was standing I was fine. The ride was so smooth, not bumpy like it might seem! To sit on the camel and be able to look out over the mountains, in the moonlight, is a memory I will never forget!

A friend we met on this trip was also alone and she stayed behind to walk with Jerry! I will ever be grateful to Anne. Just knowing he wasn’t alone was very comforting to me. But still…it was a little disturbing seeing them together and leaving him with another woman! I made the choice to trust them and fully embrace this trip up the mountain on a camel. What a unique experience! Was this real or was I dreaming? When we got over two thirds of the way up, the camel and his boy stopped. I was informed this was the end of the ride. There would soon be steps to climb and camels can’t climb steps! I paid the boy and waited for Jerry and Anne to catch up.

Jerry has the distinction of saying he walked up Mt. Sinai and I say I rode a camel up Mt. Sinai!

It was still dark, only the full moon giving us light. At the top of the mountain was a crude shelter, a convenience store, where we could buy a hot drink! We didn’t. But we were allowed inside out of the cold and wind. When we began the climb we were sweating, now we were freezing! Finally daylight began to dawn… We watched the sun rise over the mountains! It was beautiful! A sight we will never see again.

A group of folks from Germany, had also climbed the mountain by a different route. They began singing The Doxology, in German. It was so beautiful! I stood in awe! As we watched the sun rise in the east, I turned around and there was the full moon setting in the west. What a beautiful sight to see both sun and moon from the top of Mt Sinai!

What an adventure! This was not even in my wildest dreams. To climb Mt. Sinai… to ride a camel up Mt. Sinai. To watch such a glorious sunrise over Mt. Sinai. God is the Creator. God is Good. God is Love.

Read more from this author at: http://allinthedayofme.wordpress.com/