Indiana Jones for a Day 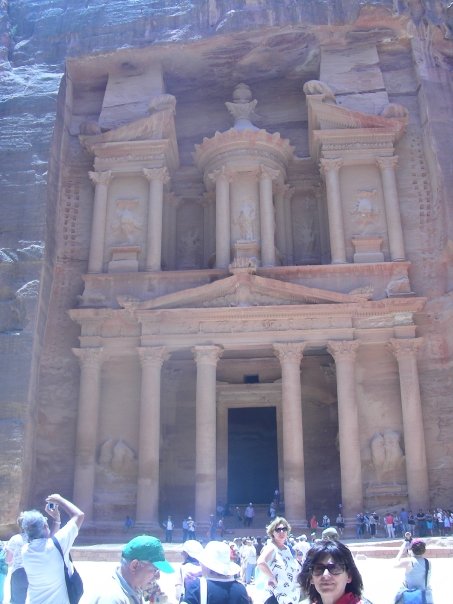 Three years ago, I went on a humanitarian aid trip to Amman, Jordan. Our work and experiences I’ll save for another article where I can do them justice. For now, I’ll just reminisce on when I got to be Indiana Jones for a day…

Indiana Jones: The Last Crusade made a major impact on me at the tender age of seven. I remember watching Indy nearing the end of his search for the Holy Grail, riding through the “Canyon of the Crescent Moon” until he arrived at a stunning façade hewn from sandstone walls. The same façade that I later learned was The Treasury of Petra. Petra, the capital city of the Nabateans (Edomites). The name etched itself into my mind and I longed to see it for myself. Watching that film over and over again as a child, I promised myself that I would go there one day. One day.

My team and I got a “tourist day” to visit Petra during our trip. I was on eggshells with excitement – a lifelong (ok, not a very long life, but still) dream come true! This was that day! The temperature was hovering around 95 – 100 degrees Fahrenheit. Donning a pair of jeans for the leg protection (I didn’t know what to expect) as well as the head shawl that is perfunctory in the culture we were visiting. I had a shoulder bag with 1.5 litres of water, some snacks, and a bottle of sunscreen. Bring on the desert!

We started out a visitor’s center in the nearby city of El-Gi. A rocky dirt road led west from the town into a valley and before too long, that valley turned into a canyon. Sandstone cliffs towered overhead, layered in hues of rose-pink, gold, cream, and bronze. Photos couldn’t capture the myriad of colors along those canyon walls. Along the road were dwellings hewn from the stone and following along beside us was a dried up aqueduct that had once brought flowing water to a thriving city. A mile or so into the canyon we rounded a bend and there it was – The Treasury stood before me and my heart thrilled. A dream being realized in that moment…

I was struck with awe – it was magnificent and all I had imagined. In that moment I felt like an explorer stumbling upon a fortress forgotten by time. The place I had longed to visit, immortalized in my mind, lay before me awaiting discovery. I thought my life may well have been complete, but oh no! There was more, a whole city awaited us! We were given several hours to explore and I learned that the road through the city goes on for several miles, ending on a mountain top where The Monastery (a near exact replica of the Treasury) sits. How could I not venture the hike?

I grabbed a few friends and we continued on our way down the dusty, dry road. For a price, you could ride camels, donkeys, or horses through the city. Peddlers along the roadside offered up trinkets and souvenirs to the passing tourists. A little boy of maybe 7 years old ran up to us and after a smiled greeting in Arabic handed me a piece of sandstone layered in purple, gold, rose, and white – glittering as though infused with diamonds. It was a gift apparently, as he wouldn’t take my offering of dinar in exchange. He walked alongside us part-way through the city and the smiles came often despite the language barrier. I still have that sliver of sandstone and think of that sweet boy whenever I see it.

Our road led us through a 6th century B.C. city and past dwellings, tombs, and temples carved in stone. The Nabataean kings each wanted their own stellar and massive tomb and would commence construction as soon as they ascended to the throne. We were told that most of these behemoth structures still stand unfinished because the kings would often die before completion and construction would then move to start on the next king’s tomb.

Tombs carved out of stone. Greco-Roman structures like an amphitheatre and Romanesque temple were added to the city during Rome’s height of power to cater to the Roman citizens who would pass through Petra since it was located along a major commercial route. Here, I glimpsed some of the brilliance of the Edomites. The Great Temple had slats of wood inserted between stone blocks for when earthquakes would strike the city. The more flexible wood served as a cushion for the massive stone bricks and its petrified remains could still be seen in the walls.

Our road wound onward and upward and soon the heat of the afternoon came in full force. Between the sun and the uphill hike we were resting every 15 minutes and had to purchase more water. And the clock was ticking – soon we would have to regroup and head back to Amman. The hard push to the top combined with a decidedly steeper trail as we neared the summit and the promise of adventure, made for a breathless arrival at The Monastery.

We had enough time to shoot some photos at the top of the mountain, see The Monastery, and take in the view of the surrounding desert before we embarked at a break-neck pace back down to the valley and our team. Our tired, tender feet were covered in dust and our backs drenched in sweat, but it was well-worth the adventure. And I’ll not soon forget when I got to be Indiana Jones for a day.

Read more from this writer at: www.audreygjohnson.wordpress.com