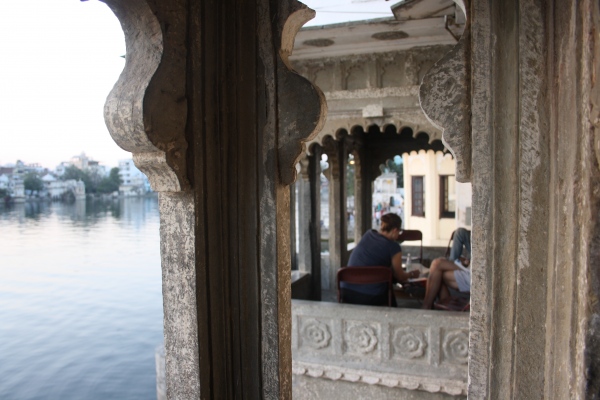 Delhi airport was very modern, clean and uncrowded and we killed time having a foot massage each (1750 rupees for 2) at the spa smelling of sandalwood which was dark, cool and relaxing before taking the 345pm flight to Udaipur.  Gaurav from the organization that we were visiting met us outside the airport and took us to our hotel which was such a friendly welcome and an interesting drive with all the brightly coloured sarees, rickshaws zig-zagging in and out and animals that clearly had as much right on the road as the cars.

I picked the Lal Ghat Guest House from the Lonely Planet Guide because it was right on Lake Pichola, was cheap and was right in the centre of the old part of Udaipur.  We had their best rooms, numbers 1 and 2, overlooking the lake and with ensuite bathroom (1,500 rupees per night). That part of the hotel is much older and the faded walls and typical Rajasthani architecture oozes with character and old fashioned charm. Udaipur is sometimes referred to as the Venice of the East and I can see why.  In a central open courtyard a long table accommodates all the guests and they all seem to be quite happy chatting together and making friends – a bit of a backpackers’ paradise!

The view from my room is very special (if you overlook the sewage immediately under the window…).  You can see the other side of the lake and the two islands with their palaces.  Sunset is particularly spectacular sinking down behind the Aravalli hills.

We set off in search of food and very soon were ‘shepherded’  (in the nicest, possible way) to the restaurant at the Palace Hotel.  Superb food-I had the Moghul lamb, Sera had a veggie dish with cheese in, I also ordered a spinnach and potato, and we had rice and garlic naan bread. Well, it was certainly too much and we decided that maybe next time we would share a main course and have one veggie dish.  I was disappointed when it came to paying as they tried to charge me extra on top of the bill when they called me over to the credit card machine.  I asked to see the bill to check the amount was right.  Rather sheepishly they took the bill out of a LOCKED drawer where they hand handwritten the extra amount that they were trying to charge me.  I payed the right amount in the end but did not leave a tip or make a fuss but made a mental note to check amounts every time!

Walking in narrow streets (really only wide enough for one car) of the old town you really are living dangerously as you are competing with auto rickshaws, mad people on motor bikes, sometimes carrying loads or a whole family on one bike, cars, cows sauntering in the road, pedestrians so close to being hit, dragged, knocked over… There is a constant peep peep from the vehicles. It’s both exhausting and exilerating! The tempting smells of food mixed with the fresh cow poo deposited on the streets daily by the free ranging cows, pigs, dogs, donkeys (and possibly humans) makes for an interesting concoction .  People seem to leave their rubbish on the streets in the old town and all the animals feed on this, including the carrier bags it is placed in I am told.  Noise is continual – music consisting mostly of drumming, prayers from the mosque, entertainment from the many hotels, dogs barking, happy travellers laughing… – I can see why I was advised to bring ear plugs!

This will be a great place for our volunteers to come, since it only costs about 5 rupees on the auto rickshaw, and chill out, have a meal, visit the attractions and do some shopping.