Stepped out of Reality – My Day in Disneyland Paris

By: cityoftheweek Posted in: Europe, France 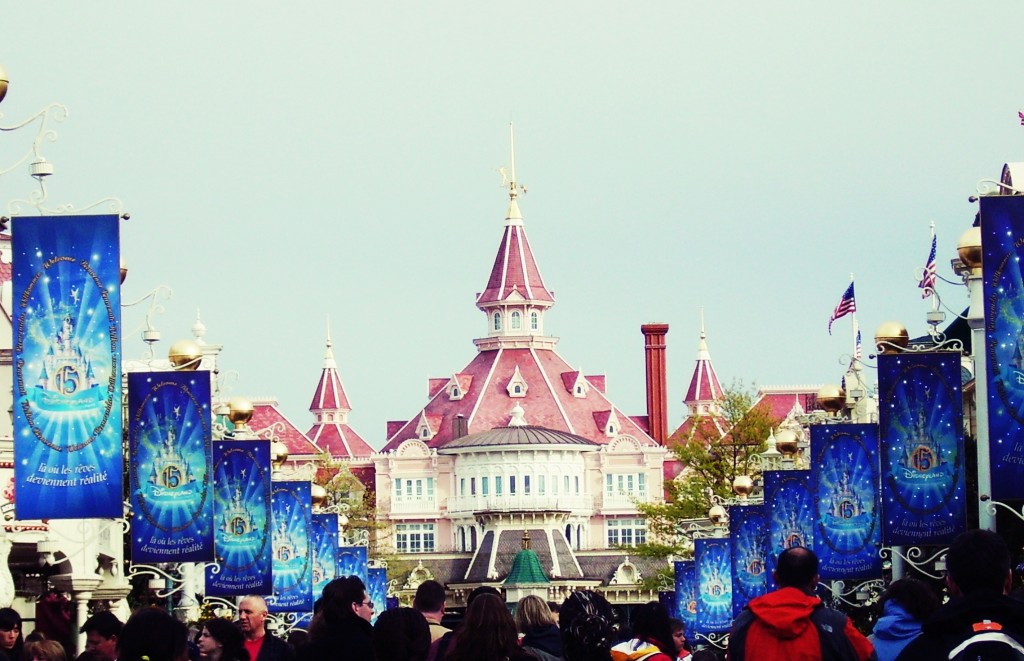 I can still feel the rush that went through every portion of my body when we entered this man-made wonderland. I can honestly say that once you go through that doorway, the whole world is forgotten. I can’t believe it’s been 5 years since I still remember it as if it was yesterday. It was the first of May, a fairly cloudy,windy,rainy Spring day, but I didn’t realize it until I looked through the photos we took there because while we were inside, the sun was shining, time was non-existent and the day was endless.

The feelings intensified as we were standing in line to board our first ride, Space Mountain: Mission 2. As we got on the specially designed space shuttles and started our journey by the rocket gently drifting into space, I couldn’t shake the feeling that the ride won’t be so “soft” all the way through. The fact that it abruptly went downhill kind of proved my point, twisting and twirling, even speeding upside down, going over comets, stars and supernovas. Ultimately, we found out that our first try was one of the most extreme rides in the park, but the adrenaline rush that even made me shake of enthusiasm as I stepped out of the rocket, only made me going back for more later that day.

My other favorite ride was another with a high adrenaline dose, the Indiana Jones and the Temple du Péril. Firstly I would like to point out the amazing scenery that was painted before us as we stepped in line on the wait for our adventure. I have to say that the decoration is incredible, there’s an Indiana Jones vibe that just makes you feel like you’re on a quest by his side. And the ride was absolutely breathtaking, I can’t even count how many times I went on it. For a second, before you fall face-down a 360 degrees loop, you can enjoy a panoramic view of the whole park.

A different movie-based joyride is the Pirates of the Caribbean. There is no minimum height or age requirement for this one, yet still they managed to create an ambiance that pleases small children as well as adults at the same time. It is a fairly relaxing boat ride, with small drops, but hearing the skulls talk to you and some pirates singing and drinking rum is worth every bit of your time.

Big Thunder Mountain is probably the loudest roller-coaster in the park. It is a memento of old American Western Films spiced with a coal mine atmosphere. It doesn’t give you a high adrenaline shock, but the panoramic view of the park and the steep drop at the end can be a real thrill.

Last but not least is Phantom Manor, a ravishing house of which at first I thought it will scare me right out of Disneyland. But, as it turned out, it can really be awe-striking hence the impressive scenery consisting of a Ghost Host, screams, echoes, weird sounds and a ballroom full of dancing holographic ghosts that kept disappearing and reappearing. I really loved it because of the continuous tension that was spreading in the room, because no one knew what to expect. Thus, they surprised us with a memory no one will never forget!

But these are only five of all the rides in Disneyland Paris (I’m happy to say I’ve tried them all, so that’s off my Bucket List- still I’m hoping to go back someday). Among others you can find merry-go-rounds that remind you of your childhood, complicated labyrinths, fun boat rides and even go karts. The amazing atmosphere in Disneyland of perpetual joy and happiness is assured by a group of wonderful people doing everything they can to make your (and especially the children’s) day on that they will never forget! The constant smiles, willingness to help and make you laugh can really make your day. Even before the park opens, and everybody’s waiting in line, they have different activities and games so that the kids won’t get bored. And at 5 o’clock there’s a parade which consists of a train carrying the most notable Disney characters, which wave, give you kisses, hugs and autographs. It is truly an amazing atmosphere and an outstanding place for children. And for all you adults out there, I can only say that there isn’t any other place, facility or any other park in the world where you will be treated with such kindness and friendship. It’s a place well worth visiting!

Read more from this writer at: http://cityoftheweek.wordpress.com