A Trip to Cabo, a Frisky Dolphin and a Bucket List

By: huntingchef Posted in: Destination, Mexico 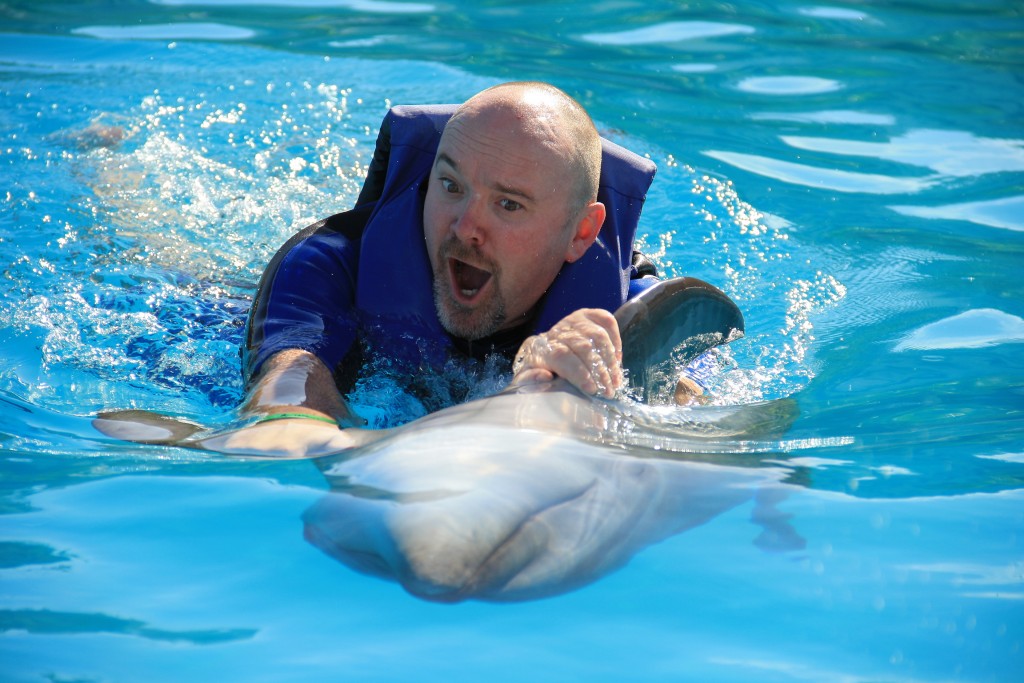 It all started out as a one of our annual managers meeting trips to Cabo San Lucas.  I had been there over twenty times, but my CFO had never been to Cabo before and was anxious to see the town.  So I made him a promise that once our meetings were completed I would spend a day doing whatever he wanted to do.  True to my word, his day came and we took a water taxi, jumped off a big rock into the water below in front of Lovers beach, we snorkled, and drank beer overlooking the marina.  Thinking that I had fulfilled my obligations, I asked him if there was anything else that he wanted to do.  He replied “swimming with dolphins has always been on my bucket list”.  I have heard mix reviews about this experience and it was something I had never done and having a few beers in me I decided that was something we could do.  The next thing I know we are both in wet suits on the side of a large swimming pool awaiting to meet our new friendly dolphins.  The trainer assigned him the nice docile female dolphin and I got the young frisky male dolphin.

The trainer instructed Darren to get into the pool to do a lap on the back of his dolphin.  It went very well and he was having a blast.  I was then instructed to get into the pool and I could tell that my dolphin really liked me because he was pushing me around trying to separate me from the other two.  I held on to his fin and he pulled me exactly half way around the pool when the imaginable happened.  It is a little blurry to recall exactly what happened due to my brain suppressing the event deep in to my little vault in my head.  At some point, the male dolphin thought it was a good idea to flip over and show me his genitals all the while kicking me in the legs with his powerful tail.  I think the featured image shows my reaction enough to understand the circumstances I was in.

Darren is really having fun with his female dolphin. Notice how proper she is acting?

The trainer had seen this action before and scolded the dolphin and explained that this was his way of showing me his affection.  I replied in one word “Obviously”.

The trainer then instructed Darren to climb into the pool for a ride on a double dolphin trip.  I was thinking to myself “This is going to be good, I hope ole frisky gives him a little taste of his bucket list medicine”.  I was surprised when the male acted flawlessly and did not do anything to aggressive, but then again, he was just scolded.

Look at how much fun Darren is having on his bucket list!

I was then ordered into the cold waters against my will.  They both took me around the pool and they could not have done it fast enough for me.  He was on his best behavior and I thought he and I could possibly move on from the incident that happened in the pool earlier.

Surprisingly it goes well, but I still have my guard up

After dropping me off on the side, the two of them sped off to do some acrobatic flips in the air.  It was sort of impressive, but as he was jumping in the air it looked as though he was looking directly at me.  A second later he was up in my grill so fast, it was like the speed of light.  This was another attempt to seduce me I suppose, but I did not care for it one bit,  perhaps I do not care for the tale groping of a slippery mammal.

Looks innocent enough, but he is rubbing his flipper on my leg. I NO LIKEY

The trainers then got the dolphins up on the deck for a photo and I manned up for the photo and put my hand on the fish because I wanted Darren’s bucket list photo to be one that he would remember and I knew his wife and kids would love the photo so I smiled. I thought it was over and I was relieved to say the least.  I was ordered back into the water for another photo shoot.  I did not really want to do it, but I also did not want to cry in front of mammals so I reluctantly crawled back into the ice-cold water with mammalert (I made that up, it is a combination of mammal and pervert).  My buddy is the one on the left licking my face with sardine breath.

"What could he possibly do to me now? Lick my face with his sardine eating tounge?"

I did not write this to scare people from swimming with dolphins.  Darren had a great experience, mine was just a different one I guess.  They are beautiful creatures with incredible speed and strength.  They are very smart and of course loving in nature.  Perhaps, my friendly mammal was paying me back because he felt that I was an outdoorsman who ate a lot of seafood.  I guess things happen for a reason and perhaps in that way I probably had it coming.  I can live with that.  Darren, you can cross that one off your ole bucket list buddy.  I was glad to share it with you.

Read more from The Hunting Chef at http://huntingchef.com/