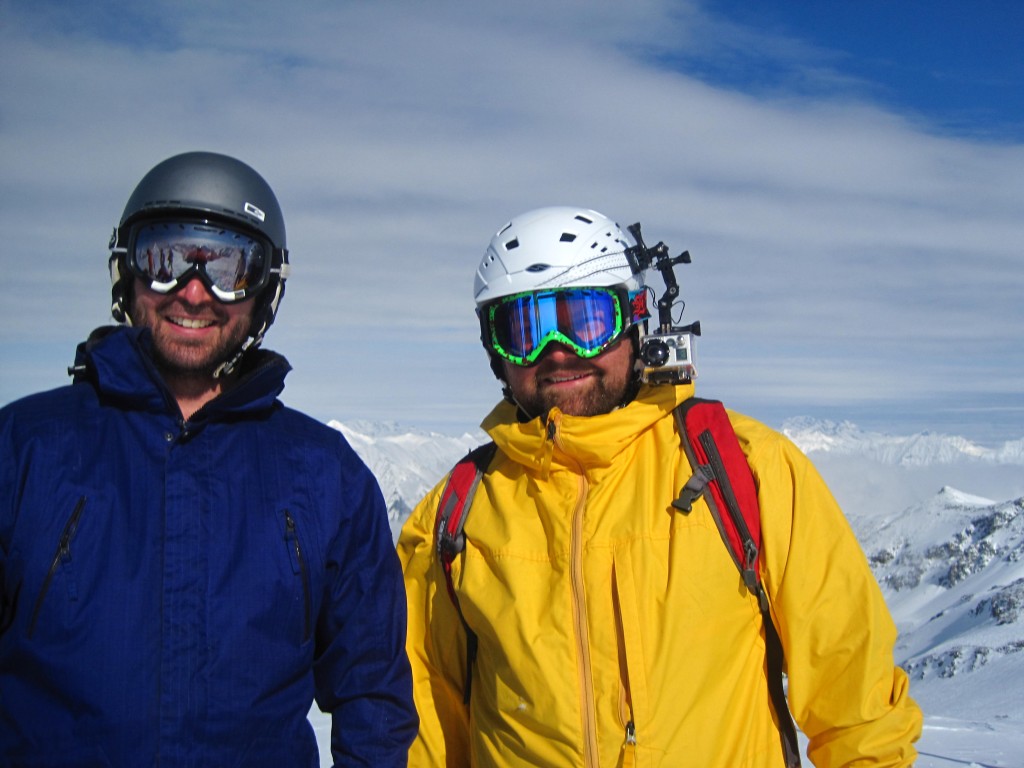 If you could have any one bucket list dream come true, what would it be? What is your

deepest desire? Is it skydiving over the Swiss Apls? Bungee jumping in California? Riding a camel to the Pyramids? Sightseeing in Rome? Scuba diving in the Great Barrier Reef? Brian Bailey of British Columbia, Canada dreamed of heli skiing at one of the best resorts in the world and we at Bucket List Publications, with the support of Selkirk Tangiers and Revelstoke Mountain Resort, made that dream come true.

Brian submitted his bucket list to Bucket List Publications and it all seemed
over the top. He is a true adventurous spirit, including bucket list items such as canoeing the Yukon river from White Horse to Dawson City Landing, attending the Pukkelpop Music Festival in Belgium, and a cross Canada tour. As I read his list, I wanted to meet him; I wanted to be his friend; and more importantly, I wanted to make his dreams come true. The top item on his list was heli skiing, which seemed like something only stunt men do in the movies. I can’t begin to imagine having the ability to ski through wide-open glaciers, high alpine bowls, and massive old growth forests, but his dreams are big and his ability was obvious through his insane skiing photos and experiences.

I emailed Brian with curiosity, asking him questions like, “Are you a professional skier?” “When did your passion for skiing start?” and “If you could go heli skiing, would you have the physical ability/endurance?” His answers and his location fueled the fire in me to make his dream come true.

I researched heli skiing opportunities in the area and watched, in awe, several heli skiing videos. One company emerged above them all. Situated in Revelstoke, British Columbia, labelled “The heli-skiing capital of the world” by The New York Times, Selkirk

Tangiers Heli Skiing is the ultimate winter destination. For over three decades, their exclusive half-a-million acres (200,000 hectares) of terrain in the Selkirk and Monashee Mountains have lured skiers and snowboarders from around the world. Their tenure has over 200 established runs with countless options for exploring the powder playground.They are in the business of making dreams and bucket lists come true!

I contacted Selkirk Tangiers and after some negotiations and planning, Brian, along with a friend, Kevin, was booked to live his powder dreams with Selkirk Tangiers Heli Skiing in British Columbia, Canada.

at the Revelstoke Mountain Resort on the 6th and 7th and heli-skiing with Selkirk Tangiers on the 8th. Everything from the luxurious two-room suite, the buffet breakfast, the Revelation Gondolas, the mountain-top views, the helicopter ride, and the untouched power was the ultimate dream come true.

The Sutton Place Hotel  is located at the base area at Revelstoke Mountain Resort. Brian and Kevin arrived on March 6th to a two-room suite that offered outstanding views across the Columbia River to the Monashee Mountains. With 912 square feet, two private rooms and two private 5-piece bathrooms, the accommodations were luxury at its finest. The separate living area housed a pull-out sofa bed, a 42-inch flat screen TV, a gas fireplace, 9-foot ceilings, large windows, a private balcony, and an outdoor table and chairs. The kitchen was fully equipped with stainless steel appliances and all of the amenities including a washer and dryer. They even offered secure, heated, underground parking facilities. Sutton Place Hotel remarkably reflect its five-star accommodation rating and exceptional hospitality offerings. It was an impressive addition to Brian’s dreamworld.

After checking into the hotel and experiencing their extravagant surroundings, Brian and Kevin returned outdoors to strap on their skis and hit the slopes. Revelstoke Mountain Resort boasts North America’s greatest vertical at 1,713 metres (5,620 ft). They also offer 3,121 acres of fall line skiing, 13 areas of gladed terrain, and phenomenally groomed terrain. They simply offer the best snow in the mountains and make sure you have the best possible time out there.

The mountain had incredible powder conditions after accumulating 38cm of snow in the 24 hours before Brian and Kevin’s arrival. The heavy snowfall replenished the slopes with deep power, creating amazing skiing and snowboarding conditions. Their thighs were burning after two runs considering Revelstoke now has the longest vertical in North America, and the lifts are fast and provide little rest time, but the mountain became their power playground and it was thoroughly enjoyed.

Wednesday night, after a full day of skiing, Brian and Kevin showed up at The Hillcrest Hotel to fill out their heli skiing waivers. Colin, who works in Guest Services, was excited to hear about their trip as he exuded helpfulness and energy; it was obvious to Brian that he loved his job. He helped Kevin pick out a great powder-specific snowboard (Burton Baracuda 169cm) and gave them all the details for the heli skiing adventure.

Their day heli-skiing started at 8am with a buffet breakfast at the lodge, after which they loaded their gear into vans and drove roughly 20-minutes to the heli lodge. When they arrived, they were given a quick rundown on avalanche/snow safety as well as avalanche beacon training.The guides, Dave and Mike, were extremely safety-focused and it put both Brian and Kevin at ease. After the snow safety training and some helicopter safety training, they were off for not only their first day heli skiing but their first helicopter ride.

The flight from the base camp to the summit of their first run was about 10 minutes. The views were spectacular with Glacier National Park to the east and Mount Revelstoke National Park to the west. The sky was clear so they were able to see the surrounding peaks covered in snow. Brian described the experience as, “breathtaking!”

They unloaded on one of the higher peaks for their first run and there were no signs of civilization in sight. The absence of ski tracks and the untouched snow brought the entire journey into realization for Brian. He was about to ski through uncharted territory from the top of a mountain that could only be reached by helicopter. His dream moment had arrived.

Their diverse group consisted of 12 people, 10 guests and 2 guides. There was a couple from Germany, a father and son from Quebec, Ray from the UK, a couple financial analysts from Washington, and a business owner from Montreal. Brain and Kevin felt like part of an elite group as they descended about 800m, 300 of which were above treeline.

The run itself took roughly 15-20 minutes. Once they descended into the trees, they were greeted with even deeper snow, “if that’s possible”, and nicely spaced trees to play in. Each member of the group was given the chance to trade places and ski near the front of the group in virgin snow.

The helicopter was waiting at an open cleaning at the bottom of the run to transport the skiers to their second run.

After 2 runs, they were served lunch, which consisted of soup, sandwiches/wraps, banana bread, and tea/juice. A fellow guest named Ray, from the UK, shared amazing stories of his time heli skiing. At 70 years old, his stories were both heartfelt and entertaining. Brian said, “Any time he wasn’t skiing, he either had his tobacco pipe hanging out of his mouth or he was off taking a leak. He was a true character.”

Their heli-skiing package included 3000 metres of skiing, which was 5 trips. At the end of the day, they were flown back to the base camp. They loaded up the vans and headed back to the lodge for some great apres-ski. Meat,cheese, and veggie trays were set out for them, along with some delicious chicken wings. The lodge was filled with sounds of laughter and camaraderie amongst people who, only hours early, were complete strangers.

Both Brian and Kevin were really surprised at how laid back the whole experience was.

Brian said, “Everyone had one goal; to ski great snow and their goal was definitely exceeded.” Although his day was almost at an end, it was one that will stay with him for the rest of his life.

Congratulations Brian! You can now check heli skiing off of your bucket list.

You can also make donations to Bucket List Publications and invest in the bucket list dreams of readers from around the world.