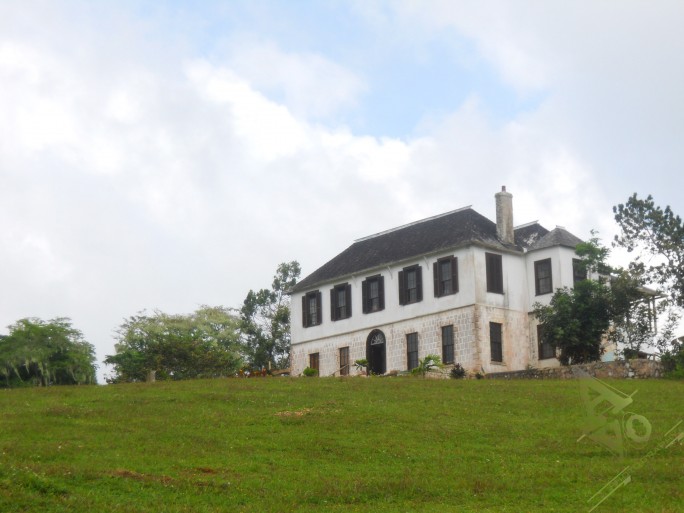 Anyone who knows me can attest that I am obsessed with buildings. It had been a while since I’ve been on an adventure so I could not miss the opportunity to take a refreshing break from my mundane life to go exploring with members of the Georgian Society of Jamaica’s St. Ann/St. Mary chapter. We didn’t go very far, our journey kept us in the beautiful garden parish. Who would have guessed that there were so many wonderful historic buildings carefully hidden in the hills? The catch though was that the routes to get to them were rough and rocky but it was undeniably well worth it!

The first stop was Liberty Hill Plantation on the outskirts of Lime Hall [told you … we didn’t go far!]. Originally built in 1740 at 1200 feet from sea level, it was once a thriving pimento plantation. I’d been there before but this was the first time I actually went inside and I absolutely fell in love with the upstairs attic. They still had the ‘trap doors’ leading to spaces which were used to hide contraband and the concentration of light entering through the two dormer windows prompted me to change my colour setting and capture the effect in black and white.

Or tour further reveled that it is an archaeological site as an Arawak kitchen midden was found which is thought to have been used to supply Christopher Columbus and his men with food. Other artifacts were also discovered over the years.

The garden and landscaping was lovely and I was quite captivated. It’s undergone somewhat dramatic restoration and is now marketed as a destination for weddings, retreats and other such events. They also have a spa which uses numerous ingredients found on the property, including loofa scrubs.

Finally, one cannot miss the breathtaking views! You can see from Seville to Port Maria almost. I couldn’t resist seeming 8 photos to make a panorama.

We went far into the hills to get to this ‘Great’ House! My anticipation heightened when I started to glimpse parts of it and I began to wonder just what I would see. From afar, a section of it appeared to be in ruins.

If ever there was a house that confused, intrigued and fascinated me the most, this would definitely be it! It was a mystery in and of itself. I was quite perplexed and even now I can’t figure out where the ‘main entrance’ is.  Also, there were two houses on the property; the second was a more recent addition.

Geddes Great House, located in Brittonville, was built by Rev Geddes in 1792 and stands 1972 feet above sea level. The house survived intact over the years that followed but began to fall into disrepair during the first half of the twentieth century. It landed in the hands of furniture designer, Burnett Webster in 1962 and he undertook a series of restoration and upgrading. During this time he installed bathrooms, a kitchen, swimming pool and electricity. Many of the furniture pieces found inside were built by him. It changed hands again and underwent even more restoration and modern additions.

It felt surreal, as if I was experiencing a series of houses and as I walked through the spaces if found myself climbing and descending stairs of various types and landing in even more interesting and some peculiar rooms. I was told that one of the owners was quite eccentric. I do wish there was a better way to explain how it felt but I’m at a loss for words. THEN … I got to the Back/Back-Side… *confused much* of the house and it was if I’d entered another zone entirely; I’d taken a passage to India!

The landscaping though is quite exquisite! Quaint courtyards flood the spaces as well as a tropical array of flowers which blended in with the picturesque view of the mountains looming on end in the background.

Our final visit for the day was Annandale Great House, located outside the village of Epworth, near Ocho Rios. I was quite excited about this one since I was told that my grandfather once worked on the property.  Built in 1760, the Great House [you know, I’m finally understanding why they are so called] commands breath-taking views of the mountains. We found the entrance and our able driver maneuvered the bus through the main gate. I was giddy with excitement and couldn’t wait to get there … perhaps that was why I began to feel that we had been driving for such a long time that we were no longer in St. Ann. HUGE PROPERTY, about 600 acres.

Finally I was able to get a glimpse but before we could tour the house an even more urgent matter had to be dealt with! LUNCH! I kid you not; I would WALK back there just for more of that delicious chicken they served up at the restaurant on site.

Though I was quite full and feeling an onset of ‘ethnic fatigue’, I decided to walk it off and see if I could get some shots of the House before going inside to see the impressive collection of antiques that sought to take you back in time as you get lost in its charm and splendour… Ooo la la what a sight for me! It reminded me of Rose Hall Great House in St. James and had that unmistakable symmetry that I’ve grown to appreciate. I ran around, dodging manure [not a good look stepping into that] so I could take in as much as I could before my battery died.

There was one main axis that linked the main entrances and led to the outdoor kitchen (which still functions – seeing it was well worth the smoke inhalation as it was actually in use during our visit. Aside from that, it was refreshing being up there. Crisp, clean air circulating I wished I could stay there all day!

To say this was not a day well spent would be a blatant lie. There was no part of it that I regretted and it only fueled my interest… I wonder where I’ll be heading to next! I can hardly wait to find out.

Read more from this author at: AyoOutLOUD