By: emilyeneurope Posted in: Destination, Spain 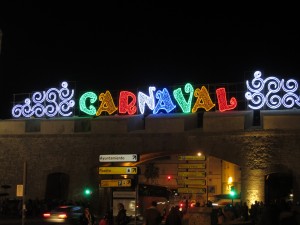 I recently heard from multiple people that Cadiz, Spain is supposed to be not only beautiful, but an amazingly fun city to visit. It’s only about an hour and a half away from my home in Alcaidesa, Spain, and it is the oldest, continuously-inhabited city on the Iberian Peninsula. Since it’s so close to us, my boyfriend and I decided it would be fun to spend the weekend there to celebrate our anniversary and partake in the Carnaval festivities.

We booked a hotel on the beach just outside of the city, which ended up working in our favor, as the celebrations in the old town lasted well into the wee hours of the morning. Our hotel was situated directly on the beach overlooking the Atlantic Ocean – while we may live on the Mediterranean, we are so far south that it takes no time to get to the Atlantic side of Spain. We started our celebrations on the promenade next to the beach; a cozy, little tapas place was just the spot. I absolutely loved the atmosphere at this restaurant. The wine list was printed onto large wine bottle displays and the menu completely consisted of either tapas, €2 to €3 a plate, or raciones, which are a slightly bigger portion at a higher price. We ordered a bottle of champagne and enjoyed tapas dishes of mini hamburguesas, skewers of solomillo (steak), and pasta rings stuffed with cheese in a red sauce. Dinner was followed with a drink outside by the beach under a heater and then it was early to bed for a restful night of sleep!

We sure needed our rest, because on Saturday we ventured into the old town to take part in the Carnaval festivities. Carnaval in Cadiz is one of the best known carnivals in the world. Their celebrations are quite different than the ones you’ll find at Mardi Gras in New Orleans; they do not emphasize the scandalous or the glamorous. The central themes of their Carnaval are often political criticisms and they dress up in costumes similar to something you’d see on Halloween. People from all over Spain come to Cadiz specifically for this celebration, and because of this, the city practices for the entire year leading up to Carnaval in hopes of presenting yet another fabulous event.

We took a cheap cab ride into the old town, and immediately upon our arrival we were thrust into a sea of people. On just about every street we caught crowds surrounding musical groups called chiringotas. Chiringotas are popular Carnaval attractions – they are musical groups consisting of about 7 to 12 people that sing satirical songs and whose goal is to entertain the crowd. They play a bevy of instruments and even though we didn’t quite understand what they were singing about, the yells and laughter of the crowd clued us into the fact that they were quite funny. In the alleyways were stalls selling masks and other goods. I went ahead and bought a mask in anticipation for the evening…I didn’t want to be the only one not in costume!

Though the city was packed with people, I didn’t miss the beauty of the architecture. Cadiz really is a beautiful and elegant city, one of the most charming I’ve seen since coming to Spain. It’s been the home port of the Spanish navy since the 18th century and the old town has various plazas, or barrios, that are connected by narrow, windy streets. It has cathedrals, monuments, statues, cobblestone streets, and elegantly-styled facades. We enjoyed a drink on the Plaza de la Catedral, where the enormous and stunning cathedral is situated; this would also be the site of the largest party crowd in the city that evening. The tapas bars were all dimly-lit, with stone interiors and menus a mile long. One of my favorite discoveries was tinto verano. Tinto verano is a red wine-based drink similar to sangria, and boy was it delicious; it was my drink of choice for most of the day since the weather was warm and springlike.

That evening we walked to the old town with the masses of people. I am not exaggerating when I say that every single person was dressed up in some sort of costume, which meant my mask purchase was an accurate foresight, much to my relief. We found a friendly little tapas place where we proceeded to order half of the menu; it’s so hard not to when a plate is only €2! Among the many fantastic dishes we enjoyed, there were a few favorites: a vegetable skewer of eggplant – or aubergine – and zucchini with a guacamole sauce; patatas bravas, which are cubed and fried potatoes served with a spicy tomato sauce; and fried cheese balls drizzled with honey. After our meal, we followed the crowd to the earlier Plaza de la Catedral where it seemed that every single person in the city had gathered. The crowd was incredible! It took us nearly 15 minutes to make our way through the mass of people to the steps of the cathedral where we could get a good view of

everyone in costume. People were singing songs, yelling, blowing kazoos, and just all-around having a great time. Not to mention, a great deal of alcohol was being served. We spent the better part of the evening partaking in the revelry!

All in all, the weekend was a great success. Cadiz was an absolutely brilliant city and the Carnaval festivities were fantastic. I can only imagine that this won’t be the last time we visit Cadiz. When summer arrives, it’s only a trip up the coast to swim in the Atlantic to enjoy a city full of charm and great food!

Read more from this author at: http://emilyeneurope.com/