I Want to Visit Mexico Without Getting Sick!

By: emilyjanuary Posted in: Destination, Mexico 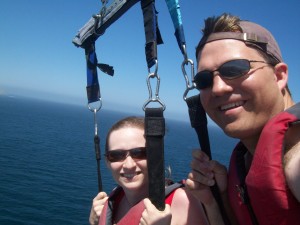 Mexico makes me sick.  Don’t get me wrong.  I love the climate, the people, the food, and the language.  But every time we have visited, I end up with nausea and stomach problems.  I suppose that’s a hazard of travel to any country or a result of my weak constitution.

The first time we visited Mazatlán, a beautiful city on the Pacific coast at the tip of the Baja California peninsula.  It is a tourist destination with the typical cruise ships arriving, the chain stores and restaurants beckoning, and the overpriced souvenirs tempting.  We enjoyed riding the bus through the city, seeing the cathedral and town square.  We even rode in a smaller taxi that looked like a golf cart to the Mega, a Mexican version of a Walmart superstore.

However, the highest point of interest, literally, is El Faro de Mazatlán, the lighthouse.  It is a short hike to the top, rewarded with a stunning view of the city and ocean.  As we huffed and puffed up the hill, the locals passed us, wearing exercise gear and not breaking a sweat.  We enjoyed the climb for it showed us how out of shape we were are.

We made it to the top!

Despite Mazatlán’s appeal as a beach town and tourist attraction, we had more adventure in visiting Copala, a tiny mountain village founded in 1565.  We were driven there by our tour guide, a soft-spoken family man named Christian.  We had the good fortune of being with him for all three of our tours.  By the end of our trip, we felt as if we were friends with him, as we were his only tour-takers that week.  He personalized each trip to our interests and questions, even driving us to a convenience store so I could buy a razor.  (How on earth did I forget my razor for a BEACH trip?)  He also humored me by letting me practice my limited Spanish skills with him.

Anyway, in Copala, we ate at a large, shady restaurant surrounded by gigantic, leafy trees and built on top of a network of caves.  After the meal, we explored the caves, their damp and cool interiors soothing compared to the hot, heavy air of the high-elevation outdoors.

Outside the caves of Copala

How did I get sick?  I’m not sure.  We ordered a seafood platter to share at a beach front restaurant on our anniversary.  As we ate the lobster, shrimp, salmon, and ceviche (maybe that’s the culprit!), we watched the sun slowly sink below the sea in a brilliant hue of orange-pink.  We also did our best to ignore peddlers trying to get our attention so that we would purchase their wares.

Excuse me? I think I ordered the large seafood platter.

That dinner was a mistake, but a blessing in disguise.  We spent the next two days lying by the pool, reading novels, and soaking up the sun.  We ordered room service and relaxed.  We enjoyed the amenities at Pueblo Bonito Emerald Bay and would visit there again.  However, we would avoid raw seafood and possibly stick to bottled water.

Our next trip to Mexico was Cabo San Lucas, two years later.  And yes, I got sick again!  But it was worth it for two reasons: the parasailing, which terrified me at first but I was glad to have tried, and La Frida, a restaurant at Pueblo Bonito Sunset Beach, the resort where we stayed.  It is named for the famed Mexican artist Frida Kahlo.  We ate there twice, but would have gone each night if it hadn’t been seriously expensive.  However pricey, the cuisine was exquisite.  We ate sea bass, gourmet-flavored breads, and fine desserts.  The most exotic dessert we tried was goat cheese ice cream with stripes of sun-dried tomatoes.  The ice cream was cut into geometric shapes and stacked interestingly together, becoming a feast for the stomach and the eyes.

I don’t know how I got sick this time, but I did despite being careful.  Although I had an uneasy stomach, we had booked a sunset dinner cruise, so I endured the rocking of the boat and the mediocre food while willing my stomach to behave and rest.

But that’s the best part about vacationing in Mexico: the rest.  There’s sightseeing, ATV rides, hiking, swimming, and shopping, but there’s also nothing like lying on the beach with a good book and the one you love―especially when the kids are home with grandma and grandpa!

My next travel goal?  To visit Mexico, preferably Mexico City, to see the pyramids, and not get sick.  Do you have any tips for avoiding such discomfort?

Read more from this author at: The Bookshelf of Emily J.