Houston, We Have a Problem 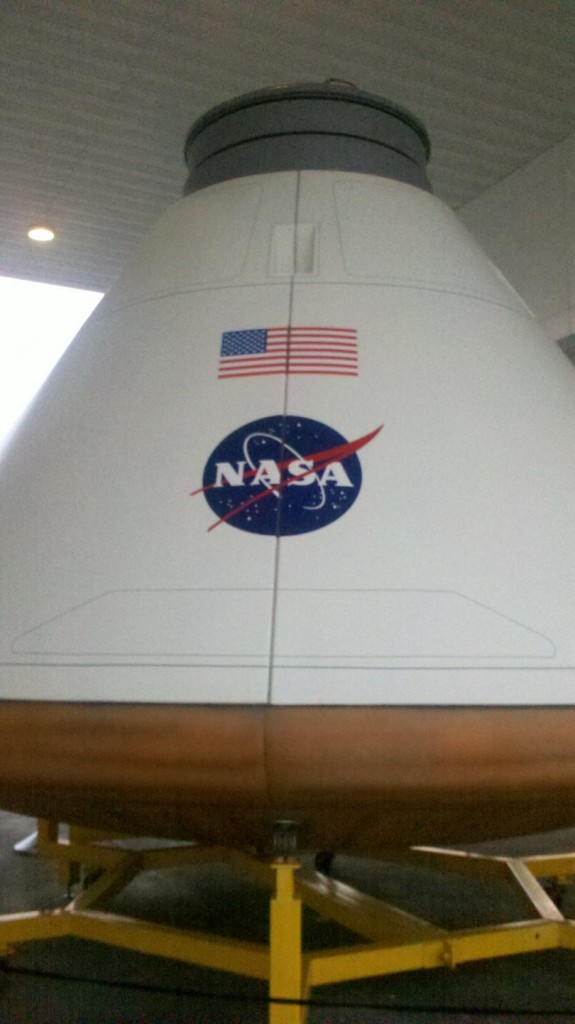 I probably shouldn’t waste that title. God knows I could use it for other posts, but that’s what I found myself saying throughout the day, this week, as the U.N toured the Kennedy Space Center (KSC). Anyone who hasn’t lived under a rock for most of their lives, unless, I guess, they are from a foreign country (as two members of our party are), knows what that quote refers to: Apollo 13, the movie. Unless, of course, you are visiting KSC. Then, Apollo 13 is ever so real, and ever so incredible. The minute you set foot on Cape Canaveral, the air force station that his home to the space center, you are sucked into the spectacular world of space exploration and history. I can’t lie: I get goose bumps just hearing the Hollywood stirring music they pipe in at the entrance. My goose bumps lasted for most of my visit, because whether I like to admit it or not: I’m a sucker for the brand of pure American pomp and circumstance that KSCmanufactures offers, and I am still (inside) a kid who wants to be an astronaut. When I watch any of my favorite space movies: Star Wars (the original 3, not the ones that came later and are inferior. Period.), Apollo 13, The Dish, The Right Stuff, and Avatar, I can’t help but believe in a day when I too could use light sabers, fly through the galaxy, visit other planets and pony up to an intergalactic bar, for a cool drink (something I truly crave, after this week of togetherness). I love that stuff, even though I’m not intrinsically a Sci-Fi fan, and when I visit KSC it all comes front and center.

There’s no way around it: NASA kicks butt.  The American space program, the history of space flight, what we’ve accomplished in barely 50 years, is nothing short of out of this world, this galaxy (how can I pass on these puns?)… the stuff of, well, Sci-Fi.  The mere idea that in 5o years we went from limited commercial flights, to putting a man on the moon, building an International Space Station, and countless space missions, is truly goose-bump worthy. The fact that KSC uses all kinds of stirring music to show you all of this, only brings it home with more bang for your buck. Tour buses drive you around the massive complex, while knowledgeable drivers fill you in on all the details of the Center, the Missions that have been launched from there, the history of the Space Program and (bonus here) the incredible wild life preserve that the island has become. While we’ve visited a wild life sanctuary in search of alligators earlier in the week, we ended up seeing 3 hugs gators and a manatee at KSC, from the bus. You can take a guided tour (China didn’t have his passport, so we could not take that one) or just do it on your own… which was fine for our rag tag, exhausted group. After our very long day at Disney, and temperatures in the mid 90s again, we were fine with taking our time and seeing things on our own terms, pausing in the AC as often as possible.

We started with the flight simulator… and let me tell you, it rivaled any of the rides we enjoyed at Disney!  Many astronauts, in video presentations, let you know that this is as close to actually lifting off in a rocket as any of us will, realistically, ever get. They educate you about the actual flights that were taken from KSC as you prepare to load… This place oozes educational impact, a lesson and learning experience in each step… and convince you that you are (practically) going into space. Once strapped in:  you’re turned upside down, pulled back against your seat, your cheeks flap and move (from “G-force”), the room explodes with sound, and eventually, as you enter space, the roof opens and you gaze down on an HD image of Earth and the stars… and you get goose bumps all over again. When an official sounding voice comes back on and tells you to exit to your right, you can’t help but feel like you’ve been yanked out of a real space ship adrift in the cosmos. <– China, Denmark and U.S in the hall that houses the Saturn 5.

The various areas of the Space Center that you visit, give you many insights into the enormous human effort that has gone into space flight. The  ”Crawler,” the moves each Space Shuttle or rocket to the launch pad, is a work of genius and brilliance in itself, and looks like it inched right out of Star Wars’ Command Station.  Moving less than 1 MPH, it brings each mission to the launch pad. The engineering that went into it, and each component of every mission, is astounding and humbling. The idea that so many people have applied themselves to this singular effort, space travel, is truly stunning!  I found myself shaking my head and thinking about how easy it all looks in the movies, compared to the reality that you come to understand as the day unfolds at KSC, and how much we all may have taken it for granted.  I watched with chills as real videos from former missions showed us the tension and focus that the mission specialists had when each mission went up. Ironically, the astronauts seem to fade a bit in the light of all the brilliant minds that get them into those rockets and up in to the stars.

Don’t get me wrong, watching the 3D Imax movie about the International Space Station, the astronauts give me tingles as well. To reach thatposition in life, that you would be chosen for space flight, is an effort that most of us can’t really fathom. The training, the education, the passion and drive… All to get in a fuel-packed rocket that may blow up beneath you, and which if successful, will take you as far from the planet we live on, as we have gone thus far. The images from space are gorgeous. Each astronaut shared the same moving thought: From space, there are no borders between countries and continents. There are no lines that divide us. From space we are one people, on one beautiful blue ball of a planet. It makes all the fighting and horror that we launch upon each other seem that much more pointless and futile.  This notion stirred me deeply.  As we exited one venue, and passed a winding display of each crew that has gone into space, I paused before the image of the 1986 Challenger image and tears sprung up.                                                                                 (A collection of rockets on the campus —>)

I still remember so well that clear day and how my naive view of the space travel changed forever. Having grown up believing that men simply get in the rockets and then go to space, I had not really internalized the idea that some might not survive.  Admittedly, before the Challenger mission exploded in 1986, many of us had become a bit complacent about space travel and NASA. That day, I was home sick, and watching the lift off live. I had not watched them in a while, but with a teacher (Christ McAuliffe) on board, I was determined to see it that day. From my Connecticut apartment, the sky outside was a spectacular blue, the sun shining. I felt giddy as they counted down, imaging what Ms. McAuliffe must feel like… an average citizen like me, going into space. My heart actually raced with the thrill of it. As it lifted off, my eyes watered and I felt the same excitement that I believe so many other Americans felt that day. And when the shuttle exploded, I sat in total shock and disbelief. Moments later, I sprang to my window and looked up, sure that if I could still see that clear blue sky, unmarred, the image on the TV might not be real. I sat transfixed as viewers and commentators alike questioned what we were seeing. All of my naive, idealistic ideas about how easy it– “it” being taking humans into space–  all was, exploded with the Challenger that day. Like many, I cried for days, and I never took that missions for granted again.  As we passed the images of each of the crews that have gone into space, I paused before each of the pictures of the crews who died trying: Apollo 1 (when 3 astronauts died in a fire on the pad),Challenger and Columbia (one of which exploded just after take off, the other which was destroyed on re-entry), and touched the images, connecting for a moment with that compelling reality.

One of the most awe-inspiring things at Kennedy is the Saturn 5 Rocket that lies on its side in one of the buildings on the campus. The sheer size of it stops you dead. The rocket boosters at the bottom rise so high that getting a photo of the entire unit is difficult. It’s impossible not to be awe struck and dumb founded by the mass and engineering that goes into what you’re looking at. The exhibits of the various flight suits, the moon rocks (one of which you can touch), original system and flight journals, the photos, and (most stirring) the Omega watch that astronaut Ed White was wearing when he died in the Apollo 1 capsule, demonstrate the amazing history that is our space program.  (The Saturn 5 Rocket and the top of Little Man’s head) As I walked through these displays and watched the videos and presentations, it’s more than patriotism and touristy nostalgia that I felt. Unlike our trip to Disney, this is real stuff. It is a history that started just before I was born, barely, and has come to a sad close recently. The Space Shuttle flew it’s last mission, Atlantis, in 2011. The Kennedy Space Center is not slated for any human space travel at any date in the foreseeable future. Private companies (not NASA) will bring man into space and deliver things to the Space Station. Other countries will continue to pursue space dreams, but we are grounded (for the most part) for now. This struck me as sad, over and over again as I thought of the thousands of people who work at KSC and who have committed their lives to these endeavors. It saddened me as I imagined how space travel has shadowed me throughout my life, but will now be pushed back for a while.

But for a single day, with China and Denmarkwitnessing the ultimate in American dreams and ingenuity, I felt proud and moved to be an American.  When we all walked out of the final space movie, about the International Space Station, a bright, full moon sat in the sky, as if manufactured especially for us… To remind us that it’s still there, waiting to be explored further.  That man has visited that bright orb, but there’s more beyond it.  When you visit Kennedy Space Center, you can not for a minute minimize the courage, drive and passion that brings man into space,  the true tragedy of when that goes wrong, and the beauty of what it has been to America for 50 years.                       Goodnight Moon—>

Check out more posts from Dawn Quyle Landau at Tales From The Motherland.