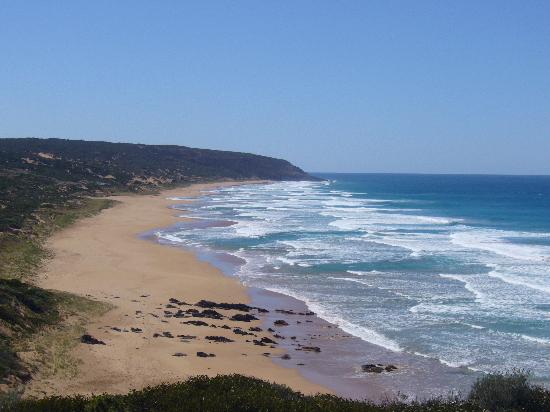 Victor Harbour is located about 70km south of Adelaide on the Fleurieu Penninsula.  From Adelaide heading south on A13 takes you through simply gorgeous countryside and alongside the McLaren Vale vineyards.

Settled in the early 1800’s, the harbour was ideal for the blossoming shipping industry. Since the River Murray, the largest river in the country was very close by, many considered Victor Harbour to be the capital city of South Australia.

The nearby Port Goolwa was not suitable for ships so a rail system was built connecting the harbor and the port. Wheat and wool were paddled down the River Murray and put onto rails, transported to Victor Harbour then loaded onto ships at Granite Island. Soon the railways took over and the use of the river was no longer needed.

Granite Island is a designated Recreation & Nature Park and managed by the National Parks and Wildlife Service of Australia. The island is home to 150 little penguins, school programs, whale watching….and bouldering, if you are brave enough!

The island is connected to the mainland by a 630m causeway, accessible either by foot or horse drawn tram throughout the day. A team of 14 Clydesdale horses rotate one shift per week to allow the horses to recover and make the trek back and forth without delay from sunrise to sunset.

This man made sign expresses the obvious - an island of granite. Kaiki refers to the 1.5km walking trail around the perimeter of the island. (Photo courtesy of J. Kline)

Upon arriving on the island there are several crushed gravel walking paths to follow that will take you up, over and around the entire island, marked to point out history and indigenous plants and life forms.

Although not officially marked, this is the high point of the island facing northwest. (Photo courtesy of J. Kline)

The south side of the island. (Photo courtesy of J. Kline)

Or…you can adventure across the piles of granite starting on the southern side of the island where it appears to be a simple, easy route down to the water and around the northeastern side.

Once you round this tiny inlet of water, be prepared for a different set of sensations – the rocks become enormous (over 5m in height and width), as a climber you are protected from the wind and ocean sounds and are now in a calm quiet yet vast space. The winter sun becomes very intense as the sweat forms while locating hand and foot holds and keeping an eye on the route.

Northern side of Granite Island - next stop, Antarctica! (Photo courtesy of J. Kline)

If you are successful and don’t mind hard work to negotiate the large boulders, the payoff is incredible! This shot was taken on the northern side and as close to the Great Southern Ocean as I could get before dangerous footing or being swept off by the swells. (If you look carefully, you can see the shadows of the boulders beside my own shadow….in shorts!)

The island and harbour bluffs were formed from molten rock 400 or 500 million years ago. The water has washed away the remaining sediment, leaving behind the hardened granite. When you reach the northeastern corner of the island, the wind gusts, ocean spray and sound immediately bring you back to real life. Stop where you are, take a breath and admire the tremendous view of the Great Southern Ocean.

Moving ahead you are now faced with limited choices – to your right are the unpredictable ocean swells, dead ahead is sheer rock face that reaches several dozen meters into the sky that has been pounded smooth over hundreds and hundreds of years. Without proper climbing equipment, this is where the bouldering adventure comes to an end.

This shot remains one of my favorites to this day. Taken  ~ 150m away from the people on the granite! On the other side of where our team is standing, is sheer rock face that drops abruptly into the cold Southern Ocean water. This is the topside view of the bouldering route end.

Today Victor Harbour and the surrounding area is a vacation destination complete with shopping, restaurants, guided penguin tours, whale watching and museum. After climbing it’s time to grab a bite to eat and move on to the next adventure!

Read more from this author at: www.oakwoodsportsmedicine.com