A Silent Alarm & A Change of Plans 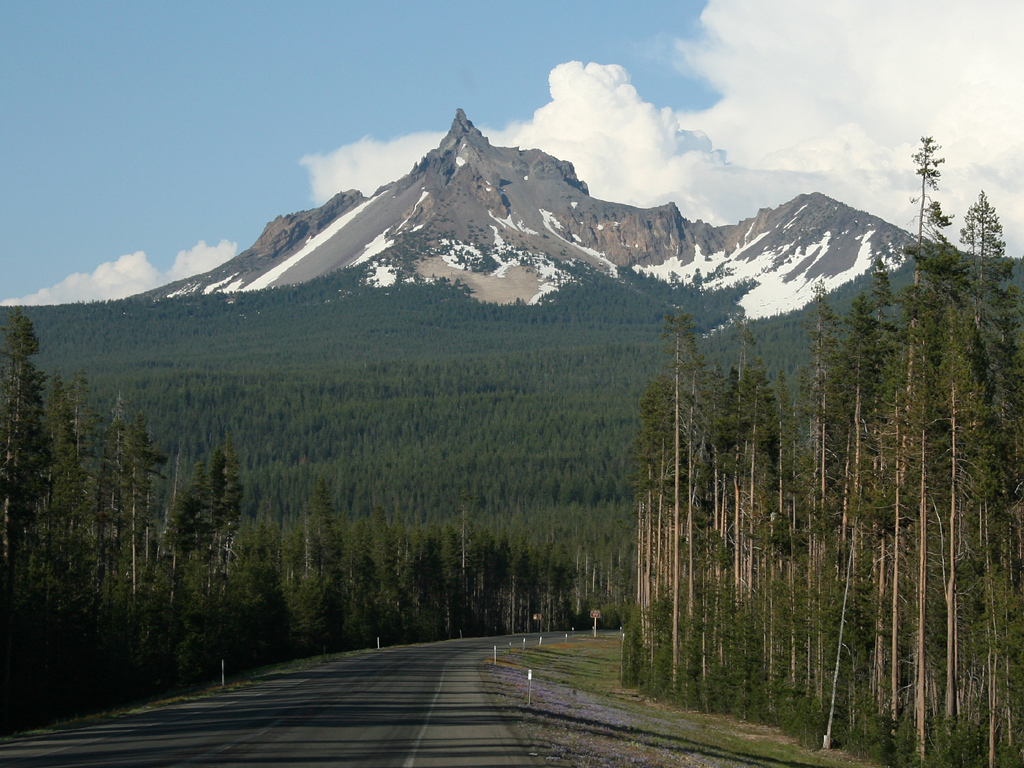 I was supposed to have gotten up at 4:30 a.m. I would be on the road a little before 5 and arrive at the Mt. Thielsen trailhead by 6. Unfortunately, my cell phone, which also doubles as my alarm clock, was set to silent, so my wake-up call came and went while I slept in ignorant oblivion. When I did wake up, I immediately realized something was amiss. For starters, it was already getting light outside. I grabbed the phone and looked at the clock. It was 5:57. Shit. I knew I wouldn’t be climbing Thielsen that day.

As a climber you really have to be time-conscious, and getting to the trail by 7 or 7:30 was just going to be a little too late, especially since there was still a ton of snow and I wouldn’t be able to run up the mountain like I could in summer. I wanted to be on the summit by 12 or 1, and I just didn’t think I could get there with that late of a start.

So I got up, made some coffee and thought about my options. After a short time I decided I would just go upriver and take pictures and shoot some film. I told my girlfriend about my change of plans and headed out, determined that the day wouldn’t be a waste.

I am quite fortunate to live so close to such an amazing area of natural beauty. I live on the North Umpqua river, one of the most beautiful rivers on the planet (in my opinion), and fifteen minutes upriver from where I live the canyons narrow and the river becomes increasingly spectacular. I pulled over after a short drive and started shooting film. I did this for a time, stopping somewhere along the highway where the river looked particularly beautiful and getting out my cameras. As I meandered up the highway, I decided that I would go somewhere I hadn’t been before. First I was thinking about heading into the Boulder Creek Wilderness, but as I pondered that option, I realized that construction on the nearby Soda Springs Dam would probably keep me from reaching the trailhead, so I changed plans and decided to head up to the Illahee Rock lookout. I had often wanted to go there, but just hadn’t managed to get there, so I made the decision to go.

Along the way, I continued to stop and take pictures, and spent a little time at Steamboat Creek and Canton Creek:

Soon I was on the dirt Illahee Road heading up and up, hoping that I would be able to reach the trailhead without running into any snow. I never saw anyone as I drove higher and higher in elevation. Soon I caught a breathtaking glimpse of Mt Bailey through the trees and I was immediately glad I had come this way. Just seeing mountains makes me happy. I drove on, and soon I began to reach the area where a huge fire had stripped most of the forest thus allowing a better look of the drive ahead. In the distance I could see snow on the road, and I had a feeling I wouldn’t be able to drive quite all the way to the trailhead. Just when I could see Illahee Rock, several feet of snow on the road brought me to a halt. Being this close, I knew it wasn’t a big deal, so I parked, got my backpack and headed out.

End of the drive.

It was already a hot day, and I foolishly had forgotten my sunscreen, so within five minutes I was pretty much resigned to the fact that I was going to end the day with a sunburn. I turned my baseball cap backwards, since the sun was behind me, and kept on trudging through the slushy snow. Ahead of me I could clearly see the lookout towers that grace the summit of Illahee Rock, but I was even more intrigued by the the rocky bluff to the left of Illahee. Hey, I’m a climber, what can I say?

Reaching a fork in the road, I had planned on taking the right-hand fork, but a rock tower to my left grabbed my attention and wouldn’t let go. I took the left-hand fork. At first, I was planning on just taking some pictures of it, but since it was so obviously nearby, I knew I could at least get to it pretty easily. I left the road after a quarter mile and followed discontinuous game trails along a gentle ridge. I thought I was seeing a formation known as Rattlesnake Rock, but I would later find out that it is actually named Bartram’s Rock. As I approached, I could see that it was very sheer-sided, but I figured I might find a gentler aspect to it if I kept exploring.

I traversed beneath the rock, and with judicious route-finding, scrambled my way around to the west side of the rock, where I encountered a really interesting rock formation:

A mini ‘Rabbit-ears’ on Bartram’s Rock.

I had come so far around the crag that at this point, I wasn’t certain I could find a way to the top, but I ended up scrambling up through some rather steep terrain, using trees and roots as handholds while making some genuine climbing moves, and after a few minutes, found myself on top of a pretty cool little sub-summit.

I took the time while I was on the precipitous crag to make a short introductory video for my Kickstarter project, and in the midst of doing that, I kept looking across at the main tower and really wishing I could find a way to climb to its summit. When I got done filming, I decided to go for it. I could see a way up along the left side of the rock, so all I had to do was find a way to its base. So I downclimbed from the secondary summit to a notch between the two crags, then started following ledges and gullies, and in a matter of ten minutes or so, I was on top of Bartram’s Rock. I was really happy to have gone for it. Now my day was really made, I had found a new crag and using my wits and experience, found a way to summit. I took some more shots and then scrambled back down.

I wandered my way back to the road, and began looking for ways up to the top of Illahee Rock. I could see what appeared to be an old trailhead marker, but it seemed really overgrown and I didn’t feel like doing to much bushwhacking so I decided to go back to the fork in the road and take the right hand road, hoping I could find the right trail. I trudged through the snow, but I never did see what looked like the main trail, so I eventually decided to head up what was obviously an overgrown logging road, and so I ended up doing quite a bit of bushwhacking. Clambering over deadfall, shoving my way through dense stands of young firs, all the while repeatedly post-holing up to my knees in soft snow made what would have ordinarily been an easy hike into a grueling thrash. Later I would figure out that I was nowhere near the main trail. I believe I found what might have been a trail to the lookouts long, long ago, but for the most part, the route I picked to hike up Illahee was pretty much entirely trailless. It was definitely an adventure though.

Eventually I reached a craggy area that at the very least looked like it might provide some fun scrambling, but once I was on the rocks, a better trail revealed itself to me (this still wasn’t the main trail, but was in much better shape than what I had been following so far.)

After numerous switchbacks and more than a few snowbanks, I arrived at an area I began calling the Goblin Gardens, a craggy slope of small, twisted rocks that reminded me of a stony menagerie of goblins or trolls. I could also tell that I was now quite near to the summit of Illahee rock.

Looking down on the garden

I continued on, and in short order the slope eased, and I saw the lookout tower for the first time.

I started to climb up the stairs, but a warning sign requesting visitors to stay off persuaded me to be respectful and leave it alone. I was happy enough as it was. There are actually two lookouts on top of Illahee, the tall one, and a small cabin a short distance away. I inspected both before finding a rock platform where I could take a break and film. The views were magnificent, to the north I could see the Three Sisters, Mt Yoran and Diamond Peak, while almost due east were Mts. Bailey and Thielsen.

I called my girlfriend back home and assured her of my continued existence, then filmed another brief bit for my Kickstarter project. I did not, however, have a lot of time. Thunder clouds were building, and even though Illahee Rock isn’t the highest mountain, it is one of the highest in the area, and I had no desire to become a human lightning rod, so I didn’t linger long.

It took me perhaps an hour to arrive back at my Jeep, sunburned, scratched and weary, but more than happy to have salvaged the afternoon.

Here is the complete video of my day:

Read more from this author at: http://alpinedon.wordpress.com/